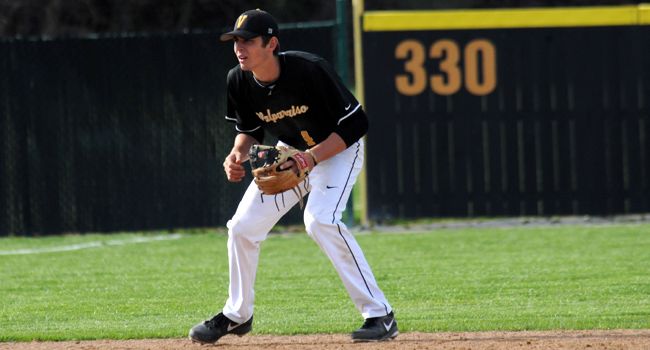 The Crusaders came up short in both games of their doubleheader Saturday at UIC, falling 5-4 and 6-3 on a balmy day at Granderson Stadium in Chicago. Valpo avoided the sweep by virtue of a 4-3 win in Friday night's series opener.

The Flames got to Dalton Lundeen (Streamwood, Ill./Streamwood) early on in game one. Tyler Detmer drove in his 16th run of the season in the bottom half of the first with a single up the middle to score Jacob McNamara.

Valpo immediately answered with a run in its half of the second. Andy Burns (Edwardsville, Ill./Edwardsville [Heartland CC]) advanced to second on a throwing error after legging out an infield single. Nate Palace (Westlake Village, Calif./Oaks Christian) kept the line moving with a hot-shot single past the third baseman. With runners on the corners and one out, Jake Hanson (Yorkville, Ill./Aurora Christian) laid down a perfectly-placed safety squeeze to score Burns from third.

UIC reclaimed the lead in the bottom half of the inning. John Coen and McNamara both tallied RBI singles in the two-run frame.

The Crusaders again mirrored the Flames last half in their top of the third inning. Spencer Mahoney (La Grange Park, Ill./Lyons Township) registered his third leadoff hit of the series. The junior scampered home from second base on a triple to the right center gap from Chris Manning (Lake Forest, Calif./El Toro). Manning slid home safely in the next at-bat when Karch Kowalczyk (Peru, Ill./La Salle-Peru) lifted a sac fly into foul territory down the right field line.

Both starters settled in after an offense-fueled first three frames.

Valpo got to Ian Lewandowski at the end of the starter's rope. Manning scorched a single to left in the top of the 7th with runners on the corners to give the Crusaders a 4-3 lead.

The Flames jumped on top in the eighth. Lundeen retired the first man of the inning before issuing a walk to catcher Alex Jurich. The next batter skied an infield pop-up for the second out before Cody Bohanek recorded an infield single. The hit ended Lundeen's day.

Ben Mahar (Mundelein, Ill./Mundelein) was called on to get the third out but McNamara poked his third hit of the day to tie the game. With runners on first and second, Conor Philbin delivered the go-ahead pinch-hit single.

Manning drew a two-out walk in the ninth, but Flame reliever Alex Posey got Kowalczyk to ground into a game-ending fielder's choice.

Valpo played from behind out of the gate again in game two of the doubleheader. An RBI double sandwiched between a pair of run-scoring singles gave UIC a 3-0 lead after one inning.

For three straight innings, the Crusaders had a runner reach third base. But each time UIC starter Jack Andersen managed to work out of it and keep a three-run advantage in the home team's dugout.

At last, Valparaiso broke the ice in the top of the fifth. With the outfield shaded towards left center, Mahoney stroked a line drive to center that glanced off the glove of a diving Alex Nath for a stand-up double. Andersen nipped Edwards' uniform with his first pitch of the next at-bat to set up a two on-one out situation. The first two pitches to Manning were balls and UIC skipper Mike Dee wasted no time going to the bullpen.

Dee called on Joe Perricone, who subsequently walked Manning to load the bases. Kowalczyk sliced a grounder to second base that scored Mahoney. Michael Morman (Rockford, Ill./Boylan Catholic) made it a 3-2 tilt when he ripped a single off the glove of Lee at third base.

The one-run deficit was short-lived, however.

A pair of errors in bottom half of the inning led to a sacrifice fly that plated Philbin. The Flames made it 5-2 when a Mario Losi (Anaheim, Calif./Canyon) wild pitch allowed Lee to sprint home from third base.

Losi lasted five innings, allowed nine hits and five runs (three earned). The freshman walked a batter and did not record a strikeout.

UIC added an insurance tally in the sixth when Crusader reliever Trevor Haas (Mt. Prospect, Ill./Hersey) surrendered a run on a fielder's choice.

Valpo got the run right back in its next at-bat. With runners on first and third with no outs, Manning hit a hard grounder to short that resulted in a 6-4-3 double play. Mahoney scored his third run of the afternoon on the play to make it 6-3.

Unfortunately, three runs were all the Crusaders got in the second game as they fell 6-3.