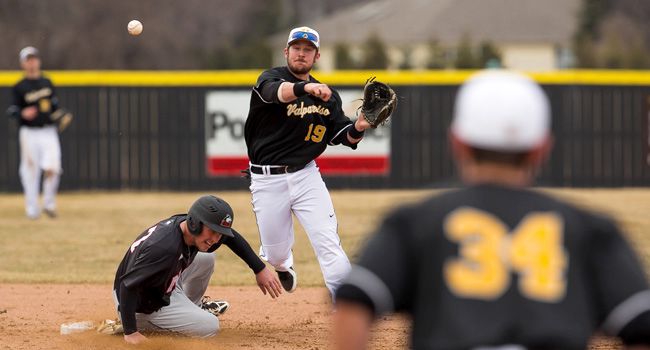 The Crusaders lost their home opener Wednesday 10-6 to Northern Illinois.

In what was Valpo's sixth straight loss, the opponent scored first for the sixth consecutive game.

The first five Huskies reached in the top of the 2nd against Valpo starter Drew Hasler (South Bend, Ind./Mishawaka Marian). Alex Smith and Carl Russell stroked back-to-back bases-loaded singles to put NIU on top 2-0 before catcher Tommy Hook grounded into a momentum-killing 4-6-3 double play. Brian Sisler did score on the play to make it 3-0.

The Brown and Gold got one of those runs back in the latter half of the inning when Andrew Bynum (Huntington Beach, Calif./Ocean View [Orange CC]) recorded and RBI groundout that scored Morman. Morman singled to lead off the frame before stealing his first base of the afternoon.

Hasler again used the double play ball in the third inning to halt a potential flurry of Northern Illinois runs. The first two batters in the inning reached, then Hasler got two outs on one pitch when Alex Klonowski rolled over on a 2-1 fastball for a 6-4-3 twin-killing.

Valpo got into the NIU bullpen in the fourth inning. Husky reliever Dirk Ormsby issued a pair of walks and plunked Bynum all before recording an out. The right-hander temporarily redeemed himself by punching out back-to-back Crusaders for the first and second outs of the inning. But his command issues returned as he walked Spencer Mahoney (La Grange Park, Ill./Lyons Township) on five pitches, forcing in Morman from third. The bases-loaded walk cut NIU's lead to 3-2. Justin Ruckman, brother of starter Jordan, came in and got Jeff Edwards (Massillon, Ohio/Jackson) to line out to right field as Valpo stranded three.

Klonowski put the Huskies back up two runs in the top of the 5th when he doubled home Brandon Mallder. Mallder reached base via Hasler's second walk of the day.

A four-run Valpo fifth inning put the right-hander in line for the win.

Ruckman induced two straight fly outs to begin the fifth. Command betrayed another NIU reliever as Ruckman issued free passes to the next three straight batters. He then hit Ray Bartolomucci (Concord, Calif./De La Salle) with a 2-0 delivery to bring in Morman. With JP Paciocco (Austin, Texas/Crockett) at the plate, Andy Burns (Edwardsville, Ill./Edwardsville [Heartland CC]) raced home on a passed ball to tie the game 4-4. Ruckman subsequently walked his fourth batter of the inning and Northern Illinois skipper Ed Mathey was forced to go to Kevin Sweeney out of the bullpen.

Sweeney unleashed a wild pitch that gave the Crusaders a 5-4 lead. Sweeney promptly walked Mahoney for the fifth base on balls of the frame. Edwards made it 6-4 when he singled home Bartolomucci. The inning came to an end when Paciocco was gunned down at home when he attempted to score from second on the RBI knock.

The Huskies cut it to a 6-5 deficit via a sac fly in the 6th. They commandeered the lead in the seventh when a two-out rally sparked three runs, making it 8-6.

NIU added two runs in the top of the 9th on an Alex Smith double to left center field. The Crusaders fell by a final of 10-6.

Valpo (9-13) will host its first Horizon League series this weekend when Wright State (14-12, 8-0 Horizon) visits town for a three-game set. The two teams will play a doubleheader Saturday beginning at 12:00 pm CT and a single game on Sunday at 12:00 pm CT.

Links to the live stats are available at valpoathletics.com.