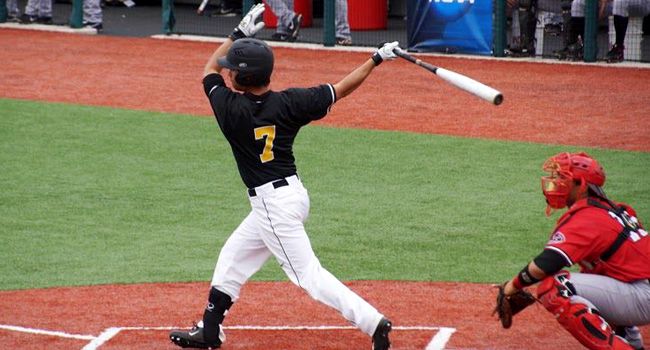 Bryce Hara had a pair of hits, a run scored and an RBI Sunday.
Wright State at Valparaiso | April 06, 2014
Related Links
Related Links

Having already secured the series victory over Wright State, the Valparaiso baseball team was unable to close out a series sweep at Emory G. Bauer Field on Sunday, as the Raiders downed the Crusaders by a 4-2 score.

For the first time in the three-game series, the Raiders scored first, striking in the top of the second courtesy of a sacrifice fly by Jeff Limbaugh which scored Sean Murphy.  Wright State pushed its lead to 3-0 in the fifth on a sacrifice fly from Brad Macciocchi and a run-scoring single by Murphy.

Valpo grabbed a run back in its half of the fifth on a two-out rally, as Bryce Hara (Irvine, Calif./Northwood [Irvine Valley College]) singled and scored on a double from Jake Hanson (Yorkville, Ill./Aurora Christian).

The Raiders pushed their lead back to three runs in the top of the seventh on an RBI single by Kieston Greene, but the Crusaders pulled that run back in the bottom of the inning when Hara knocked in Andy Burns (Edwardsville, Ill./Edwardsville [Heartland CC]) with a run-scoring hit.  But Valpo was unable to push anything more across the plate in the final three innings.

The first of two Wright State (15-12, 9-2 Horizon) relievers, Taylor Braun picked up the win with 3.2 innings of work out of the bullpen to improve to 3-1 on the year.  Andrew Elliott recorded the final four outs for his sixth save.  Mario Losi (Anaheim, Calif./Canyon) started for Valpo and took the loss, falling to 1-4 as he gave up three runs in 4.2 innings.  Hara and Karch Kowalczyk (Peru, Ill./La Salle-Peru) both tallied a pair of hits for the Crusaders.

Valparaiso (11-14, 3-3 Horizon) steps out of Horizon League play to take on Big Ten foe Northwestern on Tuesday afternoon.  First pitch from Evanston is slated for 3 p.m., with live stats available through ValpoAthletics.com.