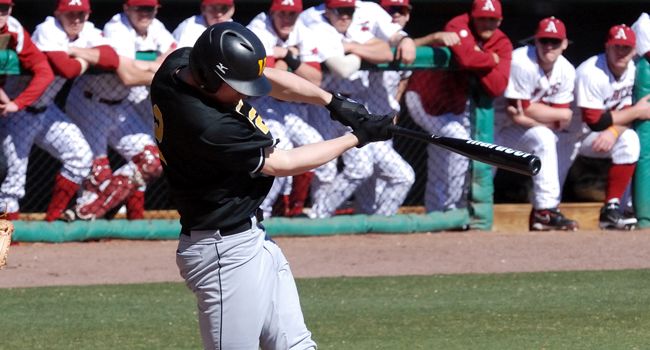 The sixth out of both games of Friday's doubleheader proved to be the most difficult to record for the Youngstown State Penguins.

Valpo plated five runs with two outs in the top of the second inning in game one. In the second tilt, they put up four runs in the exact same scenario. The Brown and Gold collected their 10th and 11th victories in Horizon League play behind 6-2 and 5-3 wins Friday afternoon at Eastwood Field in Niles, Ohio.

"Finishing strong is a major area of emphasis for us. Our pitching did its job this afternoon and the offense executed at key times," head coach Brian Schmack said.

In the first game, Chris Manning (Lake Forest, Calif./El Toro) recorded hits in all four of his plate appearances to vault his batting average to .300.

The Crusaders scored a first-inning run off the Penguins for the third time in the series as Manning's first hit of the day scored Bryce Hara (Irvine, Calif./Northwood [Irvine Valley College]). Hara had reached on a fielder's choice and advanced into scoring position via a throwing error.

Valpo added all the scoring it needed in the second inning, a frame that saw the Brown and Gold push across five two-out runs.

Youngstown State scored its only two runs of the game in the bottom half of the second. David Saluga scored the first Penguin run on a Kevin Hix base hit. Two batters later, Phil Lipari drew a bases-loaded walk that forced in Lorenzo Arcuri.

Freshman Mario Losi (Anaheim, Calif./Canyon) fired three shutout innings to earn his first career save as the Crusaders won by a 6-2 final.

Valpo kept its second-inning mojo working in game two of the doubleheader.

Down 4-0, the Penguins manufactured a three-run third inning. Lipari knocked in Jake Fryman with a base hit to right center before designated hitter Josh White slugged a two-run single back up the middle.

The three runs were all Crusader starter Dalton Lundeen (Streamwood, Ill./Streamwood) surrendered. The Horizon League Pitcher of the Year candidate yielded two earned runs on seven hits over eight innings. The lefty struck out six batters and did not issue a walk. Friday represented Lundeen's seventh consecutive quality start, a span that runs entirely through league play. His 2.17 ERA leads the Horizon League by more than a full run.

Kowalczyk shed the hammer for the arm in the ninth, working a scoreless frame to earn his ninth save of 2014.

At the plate, Manning enjoyed his seventh straight multi-hit game thanks to a 2-for-5 afternoon. The senior has 17 hits in his last 26 at-bats. His .303 batting average is tied for the team lead with Morman.

Valpo (22-26, 11-12 Horizon) will go for the series sweep Saturday afternoon at 2:00 pm ET/1:00 pm CT at Eastwood Field. Ellis Foreman (Round Rock, Texas/Stony Point) will make his tenth start of the year for the Crusaders.