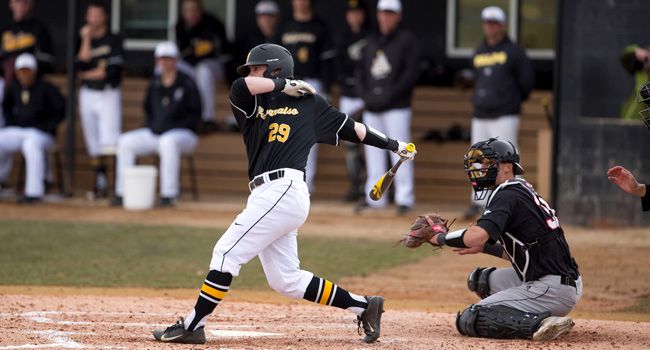 All nine starters recorded at least one hit for the Crusaders including Dustin Beasley (Round Rock, Texas/Stony Point [Cisco])and Daniel Delaney (Thousand Oaks, Calif./Thousand Oaks), who both homered in Saturday's game. Valpo banged out 12 runs on 16 hits, but San Diego State scored four runs in three different frames and threw up a seven-spot in the eighth inning of a 22-12 slugfest at Tony Gwynn Stadium in San Diego, California.

Senior Spencer Mahoney (LaGrange Park, Ill./Lyons Township) took the lid off the ball game with a leadoff single to right. Josh Clark (Granada Hills, Calif./Hillcrest Christian [Riverside City]) laid down what intended to be a sacrifice bunt; however, miscommunication on the right side of the infield turned it into a single for the Crusader left fielder.

Both runners advanced into scoring position with no outs after a passed ball allowed them to move up 90 feet. San Diego State starter Brett Seeburger got Nate Palace (Westlake Village, Calif./Thousand Oaks) to pop out on the infield for the first out of the frame. Delaney picked up his high school teammate with a sac fly to left field, plating Mahoney.

Given a 1-0 lead, Ryan Fritze (Woodbury, Minn./Woodbury [Des Moines Area CC]) retired the Aztecs in order in the first.

The Aztecs morphed the two-run deficit into a two-run lead in the second inning. San Diego State opened the frame with back-to-back-to-back doubles to tie it. One of Steven Pallares' five hits on the day came with two away to give San Diego State a 4-2 lead.

San Diego State starter Brett Seeburger was close to recording his first perfect inning before Palace laced a two-out double down the left field line. Delaney drove in Palace on the very next at-bat with a two-run blast to left.

The two teams traded four-spots in the fourth inning. Mahoney drove in two when he visited the left-center gap. Clark followed with a triple to right field that scored Mahoney. Clark scampered home on the next at-bat when Palace sent a run-scoring hit to right.

SDSU's Ty France tripled home two runs in the bottom half before he scored the tying run on a Ryan Muno base hit.

The Crusaders stranded three in their half of the fifth while the Aztecs seized an 11-8 lead with three runs in the bottom half.

Valpo sprung right off the mat the following frame.

Palace drove home his second run of the day with a double to center field. Clark came in to make it 11-9. Following Palace's double, Delaney walked to put two men on for Beasley.

Delaney rocked a Brian Heldman delivery deep over the left field fence, emptying the bases and putting the Brown and Gold back on top, 12-11.

San Diego State took a 15-12 edge in the sixth with the help of a couple Crusader miscues.

The Aztecs had runners on second and third when Danny Sheehan hit a grounder to a drawn-in Valpo infield. Mahoney made a diving stop to his left, got up and threw Sheehan out. Meanwhile, the runner at third stayed put while the runner at second was just a few steps off the third base bag. A rundown ensued which resulted in Lodden dropping the ball as he dove to tag Pallares, who was sliding into third. Seby Zavala followed with a hard-hit ball to third that caromed off Shea Molitor' (Plymouth, Minn./West Lutheran [Des Moines Area CC])s chest into short left field.

San Diego State put any hope of a Crusader comeback to rest in the bottom of the eighth with a seven-run frame. Zavala provided the fireworks with a grand slam to straight-away center field.

Mahoney, Clark, Delaney, Beasley, and Johnson each had two hits while Palace slugged three. Johnson also reached base twice with a pair of walks. The senior has reached base safely eight times in his first nine plate appearances of 2015.

Valpo (0-2) will send sophomore Mario Losi (Anaheim, Calif./Canyon) to the hill tomorrow in the final game of the series. First pitch is set for 2 pm CT/12 pm PT. Links to the audio and live stats are up at ValpoAthletics.com.