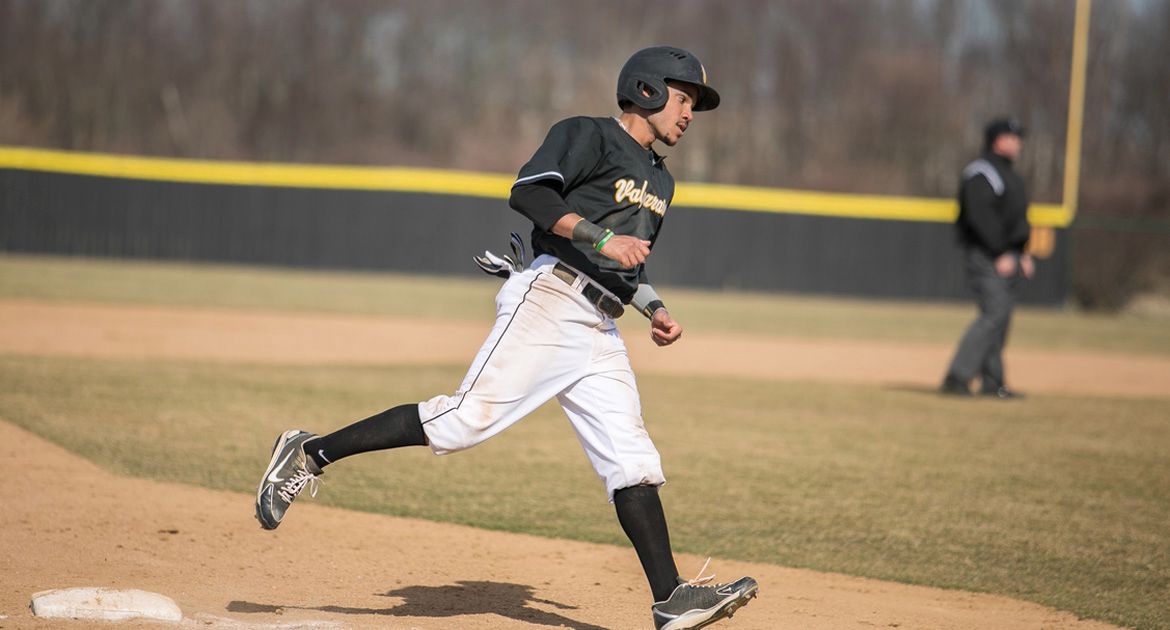 Senior Mark Johnson was 2-for-5 with a pair of runs batted in Sunday versus USC Upstate.
Valparaiso at USC Upstate | March 08, 2015

Nate Palace (Westlake Village, Calif./Oaks Christian) ripped his third home run in two games Sunday afternoon at Harley Park in Spartanburg, S.C., but USC Upstate came back from an 11-3 deficit to claim the series with a 17-13 victory over Valparaiso.

The eighth-through-second batters in the Valpo order combined to go 12-for-21 with eight runs scored, two doubles and seven runs batted in, but the Spartans plated seven runs in the sixth innings, four in the seventh, and three in the eighth to erase another outstanding offensive performance. The Crusader bullpen was responsible for nine of the 17 runs (six earned) in three innings of work.

Valpo had eight runs on the board after four innings. It represented the fourth time in the last six tilts the Crusaders had six or more runs at that juncture.

The Spartans threatened immediately in their half of the first, recording three straight singles off Valpo starting pitcher Mario Losi (Anaheim, Calif./Canyon). Losi threw a blanket over the fire by inducing a double play off the bat of Zach Krider. Daniel Fickas scored on the twin-killing. Charlie Carpenter, who was a thorn in the side of the Crusaders all weekend, lifted an RBI double to left field to even the game at 2-2.

Carpenter tied the game up again in the home half of the third.

Valpo sent eight batters to the plate in a five-run top of the fourth.

It all started with a leadoff walk to Josh Clark (Granada Hills, Calif./Hillcrest Christian [Riverside City]). USC Upstate starter Blake Whitney issued another base on balls to Chad Jacob (Irvine, Calif./Woodbridge) before surrendering an RBI single to Mark Johnson (Evanston, Ill./Evanston Township) to give Valpo at 4-3 lead. Righty Zac Manuppelli took over for Whitney after Johnson's run-scoring single. Mahoney greeted the brother of former Youngstown State closer, Nic, with an RBI base hit of his own. Lodden kept the carousel going as he shot a single through the four-hole. Palace notched another RBI on a ground out to the right side of the infield. Lodden scored a little later after a couple of Manuppelli wild pitches.

Valpo led 8-3 after three and a half innings.

The Crusaders tacked on three more in their half of the sixth.

Mahoney reached for the third time in the ballgame with a double to right field. Lodden drove him home with a single up the middle. Palace made it 11-3 when he blasted a Manuppelli delivery deep out of left field. The round-tripper represented his third home run and 11th RBI of the series.

Valpo coughed up seven of its eight-run lead in the bottom half of the sixth. Stephen Dowling started the frame with a solo blast left. Dowling's HR was one of seven hits in the seven-run inning. Ben Mahar (Mundelein, Ill./Mundelein) took over for Losi in a bases-loaded situation, but the senior allowed all three of his inherited runners to score in addition to two more Spartan tallied.

The Brown and Gold made it through six innings with an 11-10 lead, but the Spartans recaptured an edge immediately following the seventh-inning stretch.

Krider delivered a two-run blow to make it 14-11 to cap off the four-run USC Upstate seventh. They added three in the eighth to build a 17-11 cushion.

The Crusaders were able to bring the tying run into the on-deck circle in the ninth, but their bats bowed out after a 37-run series.

Valpo (3-8) raised its season slugging percentage to .429, a level it never reached once a season ago. The Crusaders will wrap up their spring trip Tuesday afternoon versus James Madison at 4 pm ET/3pm CT. Ellis Foreman (Round Rock, Texas/Stony Point) will take the mound for the Brown and Gold. Links to the audio and live stats are available at ValpoAthletics.com.