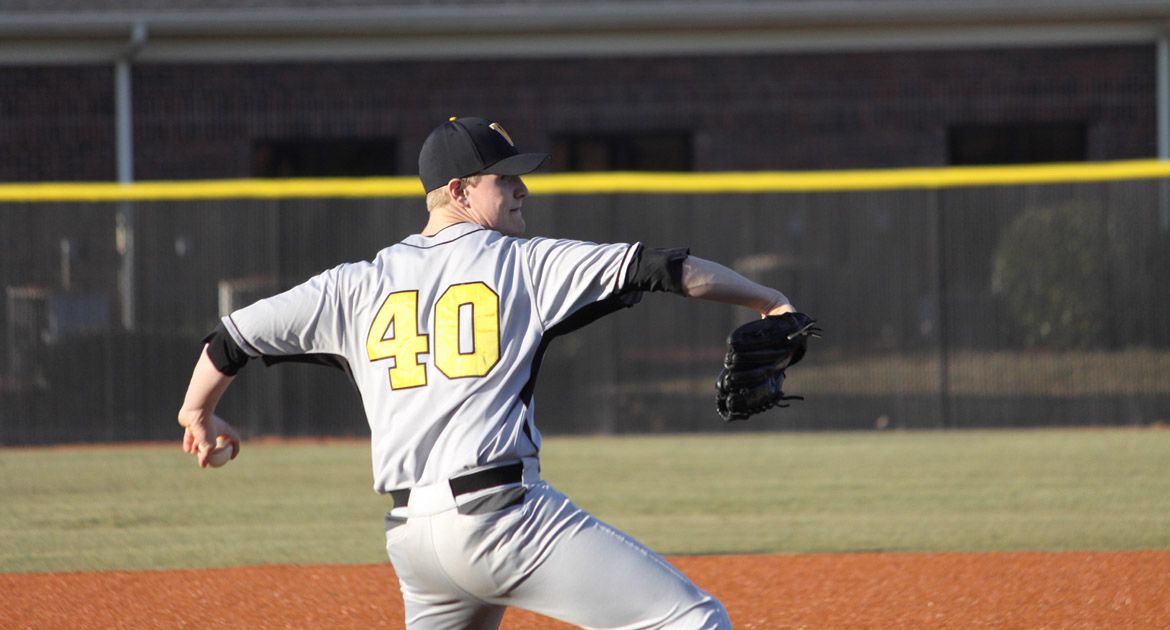 This Week in Crusader Baseball: Wright State rides into town on an 11-game winning streak ahead of its first road series in Horizon League play. Cold weather forced the alteration of the three-game set: the Crusaders and Raiders will play a Saturday doubleheader beginning at noon, with a single-game Sunday at 1 pm to close out the weekend. Wright State enters this series 31-4 in its last 35 league games, but three of those four losses have come at the hands of the Brown and Gold.

Last Time Out: Seniors Spencer Mahoney and Mark Johnson led a 14-hit day at the plate while Ellis Foreman kept the Cougars off the scoreboard until the seventh inning of Valpo's 7-2 victory over Chicago State Wednesday afternoon in the Windy City. Mahoney finished a home run shy of the cycle, driving in three runs. His average ballooned to .304 following his 3-for-4 day. Johnson reached base four times in five plate appearances, also going 3-for-4 at the dish. On the mound, Foreman rattled off a string of 11 straight batters retired in the midst of his seven-inning, two-run day. Freshman Luke VanLanen recorded two hitless, scoreless frames out of the bullpen to preserve the Crusaders’ fourth straight win.

On the Air: Audio - Valpo Sports Radio Network (WVUR, 95.1 FM, Valparaiso) - Brandon Vickrey (PxP), Tommy Mantice (Color). Live stats will be available for all three games this weekend. In addition, ValpoGameday.com is a one-stop shop for live video, stats and social media interaction, all on the same page.

Probable Starters: Junior LHP Dalton Lundeen (1-3, 4.85) will open the series on the hill for the Crusaders in search of his second straight victory. RHP Ryan Fritze (1-2, 4.03) will take the ball in the second game of Saturday’s doubleheader. Sophomore righty Mario Losi (2-1, 4.15) will look to close out the three-game set on Sunday in the same way he did last week against Youngstown State. Losi fired a four-hit shutout at Emory G. Bauer Field to polish off a sweep of the Penguins.

Series Notes: Wright State leads the all-time series 27-16 over Valpo in a matchup that began in 1992. A tense rivalry has developed between the two teams over the last few years. Since the beginning of the 2012 campaign, both teams have gone 10-10 against each other. Valpo ended Wright State’s season at the Horizon League Championship in 2013, while the roles reversed in 2014.

Looking Back: Valpo finished 2014 with a 25-28 record overall and a 12-12 mark in the Horizon League. Sophomore Dalton Lundeen compiled one of the best seasons on the mound of any lefthander in college baseball, registering HL-lows in earned run average (1.94), walks-plus-hits per inning pitched (1.02), and walks per nine innings (1.30). Offensively, Chris Manning racked up 61 hits as he boosted his career total to 264, good for second place all-time in school history.

In the Other Dugout: Greg Lovelady is in his second season as head coach of the Wright State program. He took over for Rob Cooper following the 2013 season. The former Miami Hurricane led the Raiders to a 35-22 overall campaign highlighted by a 25-4 mark in Horizon League play in his inaugural season. As a result, he was named Horizon League Coach of the Year last spring.

Wright State’s weekend rotation hasn’t missed a beat since the season-ending injury to assumed ace Robby Sexton. Right-hander Jesse Scholtens is piecing together a very credible bid for the Horizon League Pitcher of the Year award. The Diablo Valley transfer boasts a tidy 0.89 earned-run average through 40 2/3 innings pitched. Furthermore, he’s racked up 31 strikeouts opposite nine walks. Trevor Swaney will shoot for his second win of 2015 on Saturday. The righty sat out last season with a redshirt, but went 4-0 as a freshman in 2013. Swaney enters this weekend with a 4.85 ERA and has allowed nine extra-base hits in 29 2/3 innings of work. Senior Luke Mamer will make his fourth start of the spring on Sunday. The 6’5’’ right-hander has issued only one walk in 22 2/3 innings thus far, but he has hit three batters. Mamer has worked primarily out of the bullpen during his tenure in Dayton, but has been inserted into the rotation following the aforementioned injury to Sexton.

Similar to Valpo, the Raiders are enjoying an infusion of junior college in the batting order. Mitch Roman (Sinclair CC) and Ryan Fucci (Northwest Florida State JC) have combined for 29 runs scored and 33 runs batted in towards the top of the lineup. Fucci has had an all-or-nothing first month for Wright State. He’s clobbered a Horizon League-high six homers, but struck out 40 times, also a league watermark. Andrew McCafferty represents a steady presence in the third spot of the order. The senior is batting .412 in HL play while recording a team-high 16 runs overall.

Driftless Drivel: Dalton Lundeen is 3-1 with a 2.05 ERA and a 0.95 WHIP versus Wright State in five career appearances including four starts...the Crusaders were successful nine times on eleven stolen base attempts against the Raiders last season...Spencer Mahoney is the only returner who batted above .200 vs. WSU in 2014...in three appearances against Wright State, Bryce Yoder has thrown 3 2/3 scoreless innings...the Raiders are just one of eight teams in the country to turn a triple play this year.