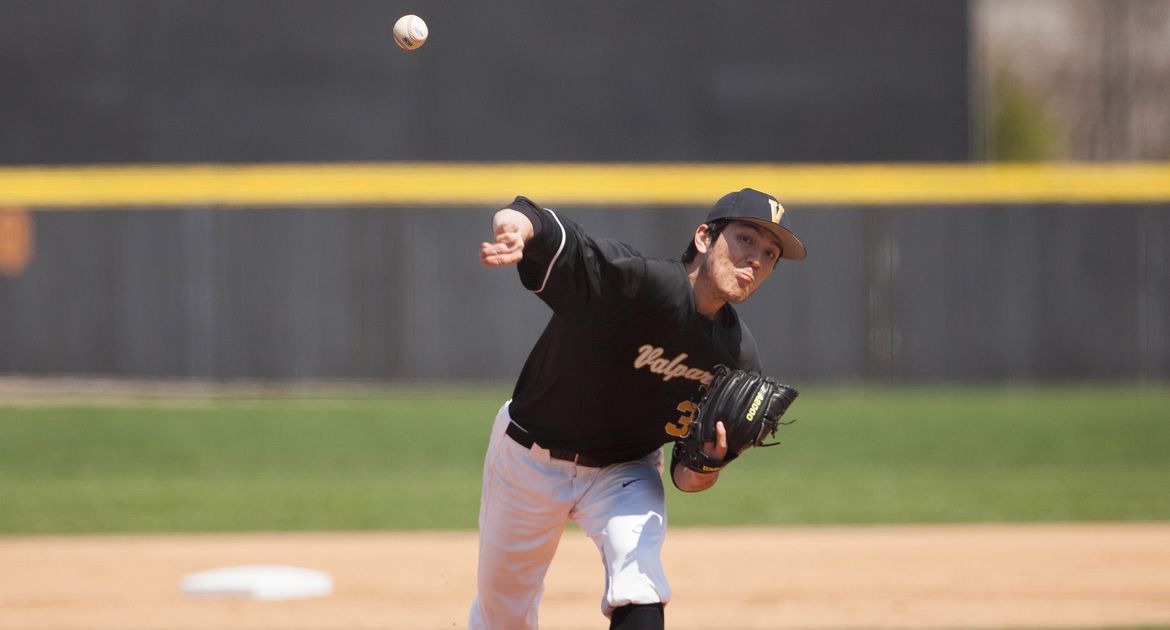 A Crusader defense that had patched together a 25-inning errorless streak committed two critical miscues in the eighth inning of a 7-5 loss to Louisiana Tech on Sunday afternoon. The gaffes allowed the Bulldogs to score five runs in their final at-bat and clinch the series victory.

Valpo posted a run in its first at-bat for the sixth time in eleven games.

The Bulldogs got the run back in the bottom half of the inning. Leadoff batter Raphael Gladu touched home on a one-out single by Sean Ullrich. Ullrich tried swiping his sixth base of the season with cleanup hitter Cody Daigle at the plate. However, freshman backstop Scott Kapers (Schererville, Ind./Mt. Carmel) gunned him down from his knees. Kapers has now thrown out four potential base stealers and owns a 29% caught-stealing percentage.

Valpo quickly regained its lead in its subsequent at-bat.

And obtain outs the Bulldog pen did, until the seventh inning when the Crusaders tacked on an insurance run. Nate Palace (Westlake Village, Calif./Oaks Christian) and Lodden registered back-to-back hits to assemble a Valpo threat. A wild pitch boosted both runners into scoring position with one out. Delaney grounded out back reliever Adam Atkins for the second out as both runners had to hold. LA Tech opted to intentionally walk Josh Clark (Granada Hills, Calif./Hillcrest Christian [Riverside City]), which loaded the bases for Shea Molitor (Plymouth, Wis./West Lutheran [Des Moines Area CC]), the club's RBI leader. Molitor fouled a pair of pitches off before working a run-scoring walk.

Losi worked a quiet, perfect seventh inning to maintain the Crusaders' 5-2 lead after heading into the eighth.

The junior right-hander navigated a floating strike zone in the middle innings to finish the afternoon with just two earned runs to his name. He scattered eight hits and walked just one while striking out a pair.

The two errors came in the eighth after Louisiana Tech led off the inning with a pair of singles. Trevor Haas (Mt. Prospect, Ill./Hersey) got what should have been the first out of the inning on a fly ball to right field. However, Clark wasn't able to squeeze it and the bases were loaded with no outs. Daigle followed with a ground ball to the left side of the infield that was fielded on a dive by Dawson. The freshman got up and fired towards second base, but the throw skipped into right-center field. Dodd, the runner at third, came into score on the play. Diaz skied a pop-up on the infield for what should've been the third out. Instead, it was just the first. Jon Washam followed with an RBI single before Hall made it 7-5 with a two-run, two-out single to left field.

Valpo brought the tying run to the plate in the ninth thanks to a Delaney single. However, he was erased on a game-ending 4-6-3 double play.

Stea, Lodden, and Delaney each had two-hit contests for the Crusader offense.

Valpo (3-8) will play its final tilt in Louisiana on Tuesday when Grambling State welcomes the Crusaders for a single game. First pitch is slated for 6 pm CT.