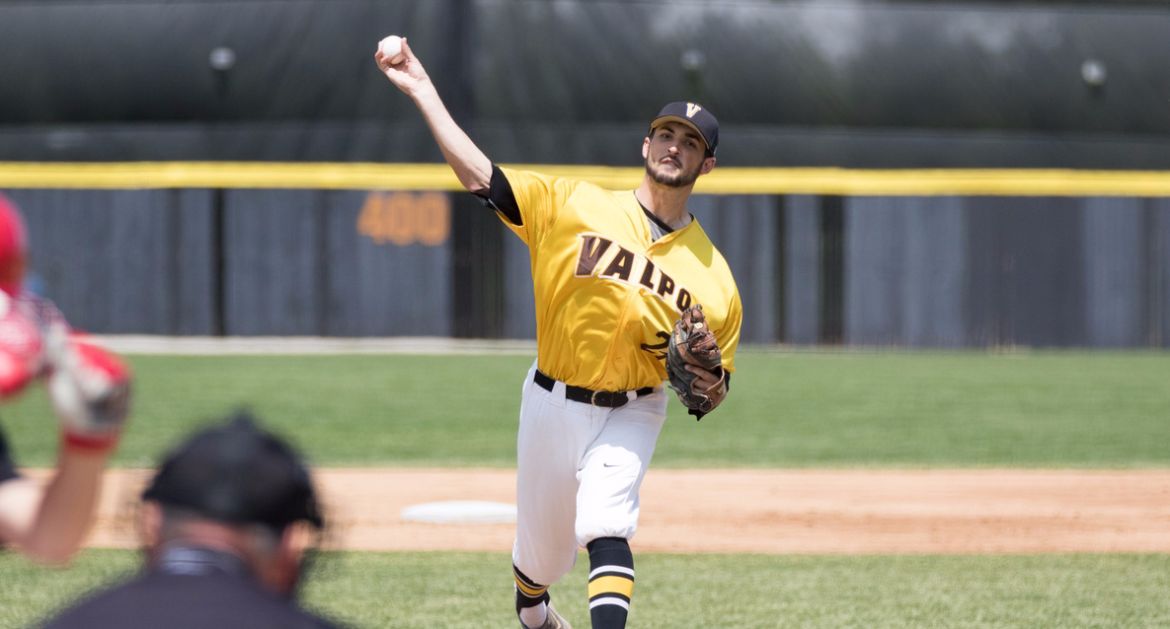 Facing the possibility of elimination, redshirt junior Ellis Foreman (Round Rock, Tex./Stony Point) fired seven innings of two-run ball to boost the Valpo baseball team to a 4-2 victory over UIC Thursday night at Nischwitz Stadium in Dayton, Ohio. The triumph prolongs the Crusaders' season to Friday, where they'll face the loser of Wright State versus Milwaukee.

Ryan Fritze (Woodbury, Minn./Woodbury [Des Moines Area CC]) slammed the door shut, punching out four Flames over the eighth and ninth innings for his seventh save of the season.

The tilt got off to a squeamish start for Foreman and the Crusaders. UIC shortstop Cody Bohanek belted the fourth pitch of the game over the left-field wall for a leadoff home run. To Foreman's credit, the right-hander shook it off and didn't allow a Flame past first base until the fifth.

Senior Jeff Edwards (Massillon, Ohio/Jackson) kept the hit parade rolling when he led off the second with a single. Chase Dawson (Chesterton, Ind./Andrean) traded places with him after a fielder's choice. The Crusaders went back to the well with the hit-and-run with James Stea (Los Alamitos, Calif./Los Alamitos [Golden West]) at the plate and it paid off. The center fielder sliced a double to right that sent Dawson sprinting 270 feet home.

The Crusaders led 3-1 after two innings of play.

The two teams traded fifth-inning tallies. Bohanek accounted for his second run of the contest with a sac fly to center. Foreman fled the frame without any further damage.

Josh Clark (Granada Hills, Calif./Hillcrest Christian [Riverside City]) returned the two-run cushion to Foreman and the Crusaders with a double to the gap in left-center that plated Lodden.

Foreman showed his appreciation by blanking the Flames over the sixth and seventh innings. He turned the ball over to Fritze in the eighth. Fritze carried the torch admirably, striking out the side in the eighth and coaxing a game-ending foul out from Scott Ota.

Foreman scattered five hits and walked just two during his tenure on the hill. His 100th and final pitch of the night resulted in his third strikeout. He improved to 2-2 on the season while lowering his ERA to 4.12. Fritze was rewarded with his third save in as many outings. He hasn't allowed a hit in his last 4 1/3 innings.

UIC closed out its season at 25-30. The Flames managed just two at-bats with runners in scoring position in Thursday's tilt against the Brown and Gold.

Valpo (29-27) advances to Friday's 4:00 pm ET/3:00 pm CT affair against the loser of Wright State and Milwaukee. ESPN3 will have live coverage with live stats also available. Links to both will be posted at ValpoAthletics.com.