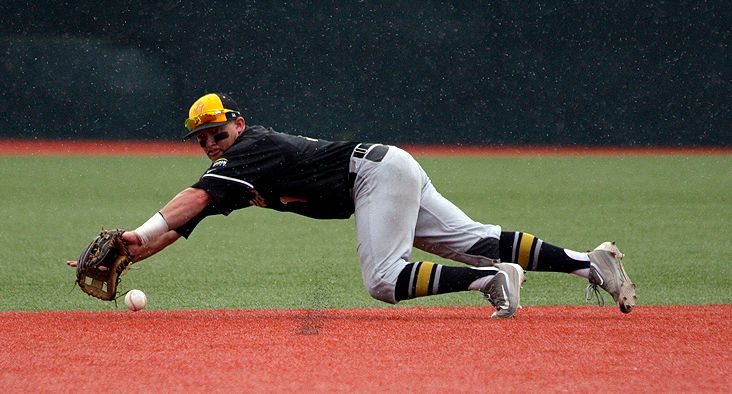 Senior Jeff Edwards made a couple diving stops in addition to ripping a double in his 143rd and final game as a Crusader. (Tim Zechar)
Valpo at Wright State | May 28, 2016 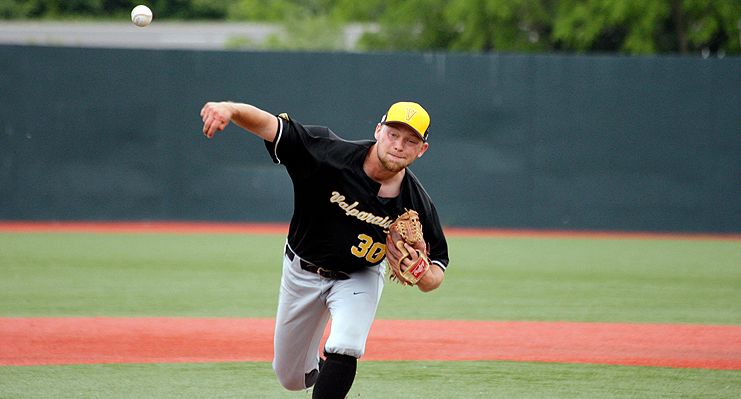 Valpo baseball's first winning season of the Brian Schmack Era came to a close Saturday afternoon at Nischwitz Stadium with a 7-2 loss to the host Wright State Raiders.

It wasn't for a lack of courage. Tasked with finding enough pitching to withstand its fifth game in four days, seniors Dalton Lundeen (Streamwood, Ill./Streamwood) and Trevor Haas (Mt. Prospect, Ill./Hersey) persevered through seven innings of Saturday's contest on two days' and one day's rest, respectively.

Lundeen, who threw 91 pitches in six frames in the Crusaders' opener against NKU on Wednesday, took the ball - albeit unexpectedly - for the 51st time in his illustrious career. He tossed a scoreless first before WSU assembled four runs - all with two outs - in the second. He recorded the first two outs of the third, but JD Orr singled home Sean Murphy to expand the lead to 5-0. The knock brought Schmack out to the hill to retrieve his ace, and most accomplished starting pitcher in his stint as head coach.

Despite expending 95 pitches 45 hours prior, Haas silenced the Raider offense over 4 1/3 shutout innings. He struck out two while scattering four hits. Haas lowered his ERA to 3.38 following a gutsy 59-pitch outing.

Valpo cut into a 7-0 deficit in the visitor's half of the fifth. Dan Delaney (Thousand Oaks, Calif./Thousand Oaks [Fresno State]) opened the frame with a single to left. He went over to third base on a Jeff Edwards (Massillon, Ohio/Jackson)' double to right. Scott Kapers (Schererville, Ind./Mt. Carmel) plated Delaney with a sac fly to right-center field.

Ryan Fritze (Woodbury, Minn./Woodbury [Des Moines Area CC]) fired his fourth consecutive hitless appearance. He struck out one in an 11-pitch bottom of the eighth.

Valpo was unable to assemble another scoring threat the rest of the way as Wright State freshman Caleb Sampen went the distance in the Horizon League Championship-clinching victory.

The Crusaders rounded out the 2016 campaign with a 30-28 record, their first winning season since 2013 and just the seventh 30-win season in the history of the program. The offense's 377 runs scored amounted to the fourth-most in a season in school history. The team's 586 hits also ranked No. 4 for a single season while its 809 total bases were the fifth-most for a Crusader club.

Individually, Friday signaled the end of twelve seniors' careers. Lundeen leaves Valparaiso with the program record for innings pitched (347.1), the third-most strikeouts (275), and a tie for the third-most wins (22) alongside John Grippi. The lefty's strikeout total represented the eighth-most in Horizon League history.

Lodden accumulated 102 runs scored, 149 hits, 79 RBIs in his two-year career with the Crusaders. He carved out a .343 career batting average coupled with a .446 on-base percentage. Despite playing in just 110 tilts over 2015 and 2016, Lodden finished eight bases on balls shy of breaking into the program's Top 10 for career walks. His .356 batting average this spring is the highest by a Valpo batsman since Ryan O'Gara (.388) in 2010.

Edwards, a four-year player, acquired 111 hits in 143 career games with Valparaiso. His steady glove on the middle infield helped factor into 202 double plays turned from 2013-2016. Haas, also a four-year member of the club, polished off a superb senior season highlighted by a 5-2 record in 93 1/3 innings pitched. Scott Jerge (Munster, Ind./Munster) obtained a win and a save in 18 career appearances while junior-college transfers Dustin Beasley (Round Rock, Tex./Stony Point) and Luke Syens (Burlington, Wis./Burlington [Madison]) concluded their careers with the Brown and Gold.

Relief pitcher Bryce Yoder (Spencerville, Ind./Eastside) made 75 appearances over his time with the Crusaders, including three in the 2016 Horizon League Championship. He registered seven career saves, tied for the eighth-most in Valpo history. Fritze matched Yoder's mark with seven saves, putting the senior into the school's record book. In addition to his seven saves, Fritze acquired six wins and 98 strikeouts in 115 career innings.