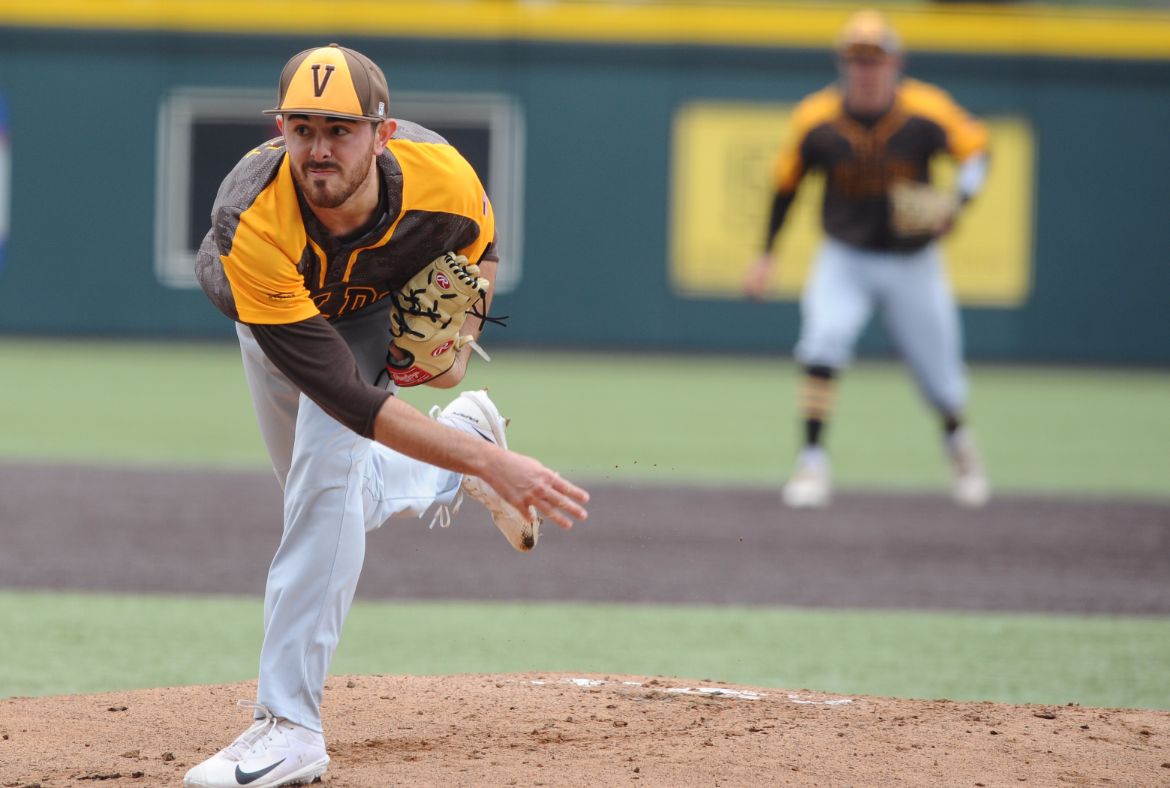 Next Up in Crusader Baseball: The Valparaiso University baseball team will look to put together another winning weekend at Emory G. Bauer Field as it welcomes Oakland to town for a holiday weekend set. The three-game series begins on Thursday and runs through Saturday.

Last Time Out: After taking two of three in the first home series of the year against Northern Kentucky last weekend, the Crusaders suffered their first midweek defeat of the season 11-2 on Tuesday at Ball State. Chad Jacob, Christian Barczi and Sam Shaikin had two hits apiece for the Crusaders.

On the Air: All three games in the series will air on WVUR, 95.1 FM Valparaiso. David Horak and Ethan Leach will have the call on Thursday, Leach and Kristin Tucker on Friday and Jordan Morandini and Ethan Hennessy on Saturday. Links to live audio and stats are available on ValpoAthletics.com.

Thursday Starters: Senior Mario Losi will look to keep it rolling after containing a powerful Northern Kentucky lineup on a hitter-friendly day at Emory G. Bauer Field last week in Game 1 of Saturday’s doubleheader. Losi held the Norse to just two earned runs in six innings. He picked up the win, his first victory of the season and his first since April 22, 2016 at UIC. Losi had dropped his last five decisions dating back to last year before breaking through with last week’s win. He now sits at 1-3 with a 4.74 ERA. Losi has struck out 21 while issuing 18 walks in 43 2/3 innings. Losi lost his only start against the Grizzlies a year ago, allowing three runs (one earned) in four innings in a 5-3 Oakland win. Losi will face RHP Connor Fannon, a senior who hails from Grosse Pointe, Mich. Fannon holds an 0-3 record and 8.83 ERA in nine games, three starts. He has walked 14 and struck out 17 in 17 1/3 innings. Last year, he pitched only 10 innings and was used mostly as a position player. Fannon did not pitch in last weekend’s series against UIC. His most recent start was in a nonleague game against Central Michigan on April 5, and he took the loss after allowing five runs (five earned) on four walks and one hit in 2 2/3 innings.

Friday Starters: Junior Wes Gordon (2-4, 5.26 ERA) will attempt to earn another victory this week after picking up his second win of the season as Valpo outscored Northern Kentucky 10-9 in Game 2 of Saturday’s doubleheader last week. Gordon allowed four runs (four earned) on four hits and four walks in five frames. He has struck out a team-high 23 and issued 10 walks in 39 1/3 innings spanning eight games, all starts. Tyler Palm gets the ball for the Grizzlies on Friday. He’s 0-5 with a 6.65 ERA in 44 2/3 innings over eight games, all starts. Palm has struck out 34 and walked 18. His last outing was a loss to UIC last Friday in which he allowed four earned runs over seven innings. The last time Palm pitched against the Crusaders, he was tagged for eight runs (six earned) on seven hits in two innings of an eventual 17-2 Valpo victory on May 15 of last season. Palm did beat Valpo with 6 1/3 innings of three-run (two earned) ball on April 17, 2016 at Oakland.

Saturday Starters: Grant Inman will get the nod from Brian Schmack for the series finale on Saturday. He was hit with the defeat after allowing eight runs on seven hits and two walks in 3 2/3 innings against Northern Kentucky his last time out. For the season, Inman is 3-3 with a 6.21 ERA in nine games, eight starts. He has struck out 21 and walked 14 in 33 1/3 innings. Inman has never faced the Grizzlies. Oakland right hander Jake Lee will get the start for Oakland. He beat UIC last week for his first win of the season, going six innings and allowed three earned runs. Lee now sits at 1-5 with a 5.63 ERA and a team-high 45 strikeouts against 16 bases on balls in eight starts totaling 46 1/3 innings. Lee worked three shutout innings in relief in his only Emory G. Bauer Field appearance last year. He started against the Crusaders at Oakland and took the defeat, allowing five runs (four earned) in five innings of a game Valpo won 11-0.

Series Notes: The Crusaders have had good success against the Grizzlies through the years, as they own a 31-18 lead in the all-time series, which dates back to 1999. A year ago, the Crusaders went to Rochester and won two of three in April, then swept a home doubleheader to finish the season 4-1 against the Golden Grizzlies. The Crusaders have won six straight Emory G. Bauer Field meetings dating back to May 3, 2014.

Inside the Crusaders: The Crusaders enter the series hitting .261 and own a 4.75 team ERA. In Horizon League play, Valpo is batting .272 and has an ERA of 7.22. Chad Jacob is the lone Crusader hitting above .300 at .347 in 18 games after missing time early in the season due to a wrist injury. Sam Shaikin now leads the remaining Crusaders at .299. Five Valpo players are hitting .293 or higher. Nate Palace and Jake Hanson share the team lead with 10 doubles apiece, while Palace paces the squad in home runs (six) and RBIs (20). Jon Tieman leads the Horizon League in saves with seven and holds a 3.29 ERA. Easton Rhodehouse (3-3, 1.69) and Montana Quigley (0-0, 1.27) have also been reliable arms out of the Valpo bullpen.

In the Other Dugout: Oakland captured national attention last summer when it announced an unconventional resolution to its head coaching opening. Colin Kaline and Jacke Healey were named co-head coaches, becoming the lone Division I school with two head coaches. They also have one of the youngest dugouts in college baseball as Healy and Kaline are both 28 years old. Kaline is the grandson of Hall of Famer Al Kaline. Oakland is hitting .242 as a team and holds a 7.47 team ERA. Zach Sterry leads the Grizzlies in hitting at .339, but no one else is above .280. Oakland has been swept by Wright State and dropped two of three against both UIC and Youngstown State this season.

Driftless Drivel: Jake Hanson saw his 16-game on-base streak end on Tuesday at Ball State… James Stea was hit by a pitch for the 12th time this season on Tuesday, extending his league lead… Sam Shaikin extended his on-base streak to 14 and notched his 10th multi-hit game of the season on Tuesday, joining Palace and Jacob as the only Valpo players with 10 or more multi-hit games… Christian Barczi has doubled in each of his last four games. He’s hitting a team-best .471 over the last four games, while Shaikin is also on a tear at .438 during that stretch.