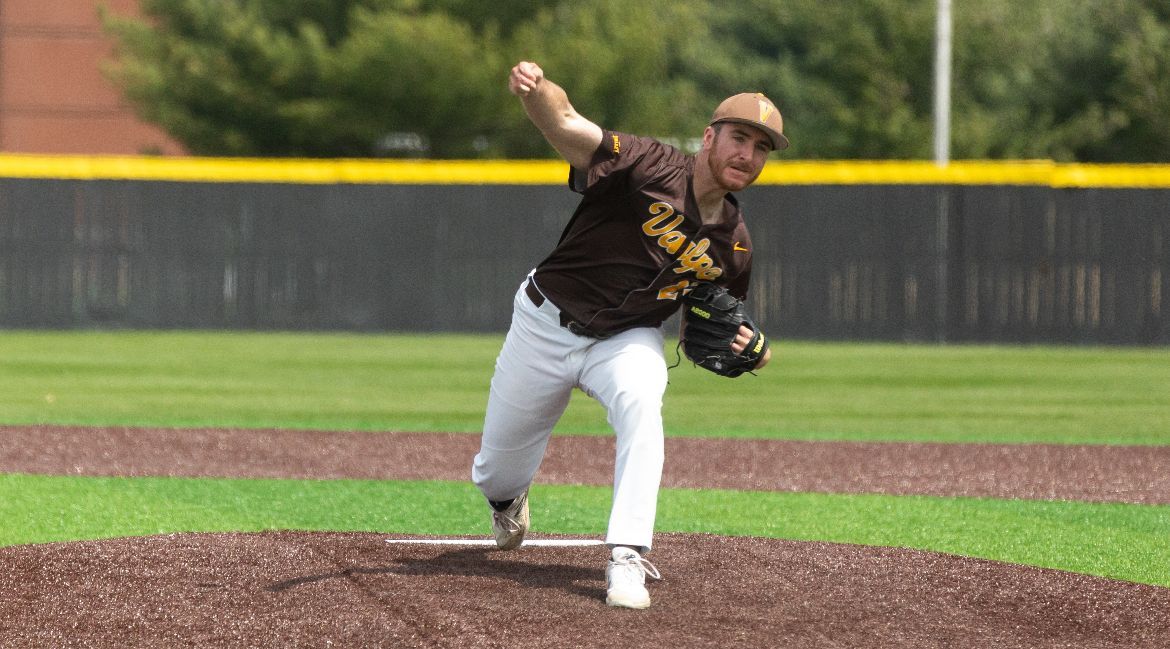 Colin Fields gets the ball on Tuesday with Valpo's season on the line.
Valparaiso at Indiana State | May 25, 2022
Related Links
Related Links

Next Up in Valpo Baseball: The Valparaiso University baseball team will open up the 2022 Missouri Valley Conference Tournament on Tuesday with an elimination-round game against Indiana State. The winner of the game will advance to the double-elimination portion of the event. Head coach Brian Schmack will give the ball to right-handed pitcher Colin Fields with the season on the line on Tuesday. If Valpo wins, the team’s next game would be on Wednesday morning against MVC regular-season champion Southern Illinois. The winner of the tournament, which is hosted by Missouri State, will receive an automatic NCAA Regional berth.

Recently in Valpo Baseball: After dropping the series opener 9-2 on Thursday night, Valpo bounced back with an 8-4 victory on Friday in the second game of a regular-season-closing set at Evansville. The Beacons used a 16-hit attack to help lefty Jake Miller earn his sixth win of the season after allowing one run on three hits over three innings. The Beacons had four runs on six hits in the first inning alone. Another big first inning helped Valpo to a 3-0 lead in Saturday’s series finale, but play was halted in the top of the second due to lightning and inclement weather and was eventually called a no contest.

Following the Beacons: Every game of the MVC Tournament will air on ESPN+ with broadcasters Scott Warmann, Shane Dennis, Art Hains and Connor Onion on the call. Hains and Onion will be on the broadcast for Tuesday’s game against Indiana State. Links to live video and stats will be available on ValpoAthletics.com. For in-game updates, follow @ValpoBaseball on Twitter.

Head Coach Brian Schmack: Brian Schmack (168-266), the 17th head baseball coach in Valparaiso University history, is in his ninth season in charge of the program. This year, he moves into sole possession of third in program history for number of seasons coached with nine, surpassing Donald Warnke (1946-1953). Entering the season, Schmack’s win total ranks fourth in program history after he surpassed Rick Ferchen (1982-1987, 147) during the 2021 campaign. Also in 2021, Schmack joined Paul Twenge (1988-2006), Emory G. Bauer (1954-1981) and Tracy Woodson (2007-2013) as the only head coaches to reach the 150-win threshold. The former big-league pitcher led Valpo to 25 wins in his inaugural campaign in 2014, a school record for victories by a first-year skipper. Schmack, a member of the 2003 Detroit Tigers, served as pitching coach/associate head coach at Valpo for seven seasons prior to his promotion.

Series Notes: Valpo holds a 30-53-1 all-time record against Indiana State, Tuesday’s first-round opponent. Now would be a good time for the team’s first win over the Sycamores since joining the Missouri Valley Conference as Valpo is 0-13 against Indiana State since joining The Valley. The Beacons are attempting to end an 18-game head-to-head losing streak that dates all the way back to March 31, 2007, an 11-2 win in Terre Haute. Tuesday’s game will mark the first MVC Tournament matchup between these two teams.

Valpo in The Valley Tournament: This will represent Valpo’s fourth MVC Tournament appearance as the team attempts to build on its best conference tournament showing since joining the league. The Brown & Gold survived a pair of elimination games with wins over Missouri State and Illinois State to finish as one of the final four teams standing in the event, joining a pair of NCAA Regional qualifiers in Indiana State and DBU and a 40-win Southern Illinois club. Valpo made a strong entrance in its first MVC Tournament back in 2018, beating a DBU team that went on to earn an NCAA at-large berth by a score of 13-10 in the tournament opener before incurring tight setbacks to Bradley (11-9) and DBU (7-5). The only season where Valpo did not win at least one MVC Tournament contest was 2019, when the team bowed out after an opening-round setback to Missouri State.

Tucker Continues Tear: Nolan Tucker notched his third four-hit game of the season in Valpo’s 8-4 victory over Evansville on May 20. He also had four-hit showings against Southern Illinois and St. Bonaventure. Tucker accounts for three of the team’s five four-hit games this season. The day helped Tucker finish the week with a slash line of .625/.667/.875 as he posted five hits in eight at-bats over two games. Tucker finished with a .384 batting in MVC play this season after entering the season with a .188 career batting average over two injury-riddled seasons. Furthermore, Tucker is hitting .374 overall and is in position to finish with Valpo’s best batting average since Ryan O’Gara hit .388 in 2010.

Sophomore Jump: Valpo shortstop Alex Thurston enjoyed a sophomore jump rather than a sophomore slump this season. After hitting .158 last season, Thurston finished the regular season with a .306 batting average, the second-best on the team and one of two Beacons to finish the regular year above the .300 line. Thurston missed the final game of the regular season at Evansville with an injury.

Lockwood Locked In: Over his final three appearances of the regular season, freshman RHP Connor Lockwood has hit his stride. The rookie righty allowed two runs on nine hits while striking out eight and walking five during that stretch, posting a 1.80 earned run average. That marked a significant step forward for Lockwood, who entered that stretch with an 0-5 record and 8.90 ERA.

16-Hit Effort: Valpo matched a season high with 16 hits in the final game of the regular season, an 8-4 victory at Evansville on Friday night. Six of those hits came as part of a four-run first. The 16-hit output equaled the team’s season high (March 25 vs. St. Bonaventure) and represented the team’s highest total in MVC play this year. The Beacons posted double-figure hit totals in three of their final five regular-season games and also did so in all three games of a road series at Southern Illinois in late April and early May.

Beacon Bits: Valpo has played 15 games this season decided by two runs or fewer and holds a 6-9 record in those contests. The Beacons are 3-4 in games decided by the slimmest of margins. Despite the number of close games, very few have flipped in the late innings. The team leading the game through six innings is 42-2 in Valpo games this year. The team leading after seven innings is a perfect 35-0 in Beacon games in 2022. Valpo is 2-21 when scoring three runs or fewer, but when scoring four runs or more, the team is 14-10.

Fields on the Single-Season Strikeout List: Colin Fields struck out nine on May 13 vs. Bradley, his 12th time in 13 starts with seven strikeouts or more this season before he had a season-low one strikeout in a one-inning start on May 19 at Evansville. Entering the MVC Tournament, Fields has 109 career strikeouts. In the game against Bradley, he became the first Valpo hurler to rack up 100 strikeouts in a single season since Bryce Shafer in 2010. In addition, he climbed into the top 5 in program history in single-season strikeouts by surpassing Richard Scheub’s 103 in 1949. Fields is just the second player since 1972 to crack the program record book in single-season strikeouts. He is 18 strikeouts away from tying the program’s single-season strikeout record. Furthermore, if Fields logs at least five innings in his first-round MVC Tournament start, he will reach 200 career innings pitched.

Fields on the Career Strikeout List: After becoming the 12th player in program history to reach 200 career strikeouts on March 25 at St. Bonaventure, Fields unlocked another achievement on April 1 at UIC, cracking the program’s career top 10. He did so in resounding fashion, fanning a career-high 13 to usurp Chuck Donley (212, 1991-1995) for 10th in program history. Furthermore, the 13 strikeouts marked the most by a Valpo pitcher in a single game since April 12, 2011, when Jon Gulbransen reached that same number in a game against Chicago State. He now has 259 career strikeouts, a number that ranks fifth in program history. During Valpo’s May 7 game vs. DBU, Fields passed his former teammate Jon Tieman on the career strikeout list. He surpassed Bryce Schafer (2008-2010, 250) and Shawn Barker (1987-1990, 253), who was Valpo teammates with Fields’ father Timm, in the May 13 start vs. Bradley. Fields needs 16 more strikeouts this season to surpass Dalton Lundeen for third in program history and finish with the program’s highest career strikeout total since 1972.

Maka Earns National Player of the Week: Valpo freshman Ryan Maka was named a National Player of the Week by Collegiate Baseball newspaper on Monday, May 16 after a breakout series against Bradley that featured four home runs. He enjoyed the first three-homer game by a Missouri Valley Conference player in league play in the May 13 series opener against the Braves. In addition, Maka became the first Valpo player since 2018 (Blake Billinger) and just the second since 2008 to achieve that feat. That came as a part of a four-hit game to begin a three-game set that saw him record five extra-base knocks. Maka went 7-for-13 (.538) over the three games with six RBIs, six runs scored, 20 total bases and a 1.538 slugging percentage. The rookie outfielder followed his career-high four hits in the series opener with three hits in Valpo’s 8-2 victory on May 14. Maka was second on D1Baseball.com’s list of the top 30 hitting performances in the nation on Friday, May 13. He became just the 50th player nationally with a three-homer game this season. Maka became the first Valpo player to earn national Player of the Week honors since Colin Fields did so on March 15, 2021 following his no-hitter against Middle Tennessee State.

Miller Tabbed MVC Pitcher of the Week: Valpo starting pitcher Jake Miller earned the Missouri Valley Conference Pitcher of the Week nod on May 16 after his strong start on May 14 vs. Bradley. The left-hander earned his team-leading fifth victory of 2022 by turning in seven shutout innings of dazzling three-hit, one-walk ball while recording nine strikeouts in an 8-2 triumph over the Braves. He racked up nine or more strikeouts in a game for the fourth time this season. Over his last two starts, the Valpo southpaw has combined for 16 strikeouts and just one walk. Miller became the second Valpo player to earn an MVC weekly award this season, joining Nolan Tucker, and the first Beacon to receive MVC Pitcher of the Week laurels this year. He joins Colin Fields (twice) and Easton Rhodehouse as the only Valpo players to earn MVC Pitcher of the Week honors since the program joined the Missouri Valley Conference.

Nowak Nailing It Down: Bobby Nowak nailed down his eighth save of the season in the 11-10 victory at Southern Illinois on May 1, moving to within one save of cracking the single-season Top 5 in the program record book. Nowak now owns Valpo’s highest single-season save total since 2014, when Karch Kowalczyk had 11. In addition, Nowak now ranks tied for ninth in program history in career saves despite being in his first season at Valpo.