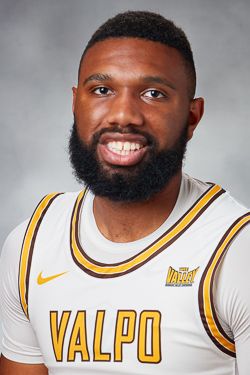 2021-22: Played in all 32 games and made 15 starts in his final season of eligibility... Played in all 95 games during his three seasons competing for Valpo... Averaged 3.2 points, 3.1 rebounds and 1.1 assists in his final season... Hit an impressive layup to give Valpo the lead for good with 29 seconds left in the third-place game of the Nassau Championship on Nov. 24 vs. Tulane... Had season highs in both points (13) and rebounds (8) on Jan. 2 vs. Illinois State, knocking down five of his eight field-goal attempts and half of his six 3-point tries... Had nine points on Feb. 19 at Evansville... Had a career-high four blocked shots and a plus-minus of +18 on Feb. 21 vs. Evansville.