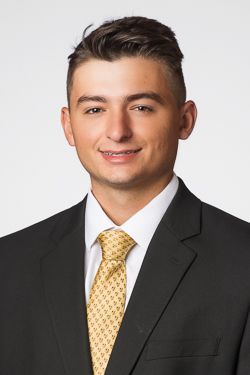 2021-22: Posted a season scoring average of 74.73 in his first season at Valpo... Golfed 30 rounds while participating in 11 of the team’s 13 events... Achieved a pair of top-10 finishes, including a runner-up performance in an 89-player field at the Twin Oaks Intercollegiate (March 22)... Tied the modern program record for 36-hole tournament score at Twin Oaks with a 137 (-5)... Had a career-low 67 (-4) in Round 1 at Twin Oaks, tying for the sixth-best 18-hole round in the program’s modern history... Named the MVC Golfer of the Week following the Twin Oaks Intercollegiate... Ranked third on the team in scoring average... Carded nine rounds of par or better.

2020-21 (Ball State): Academic All-MAC selection… Competed in three events, twice as part of the BSU lineup… Managed a 76.56 scoring average over nine stroke-play rounds… Had his best finish with a tie for 26th while competing as an individual at the Hoosier Collegiate Invitational… Carded a season-best 72 in the final round of that event… Posted season-best 54-hole totals of 228 at the Hoosier Collegiate and the Boilermaker Invitational.

2019-20 (Ball State): Competed in six events and 15 stroke-play rounds… Season was cut short when the last four spring tournaments, including the MAC Championships, were canceled because of COVID-19… Managed a stroke average of 74.60… Recorded his best career finish with a tie for 12th out of 87 golfers at the Musketeer Classic to close out the fall schedule… Finished that event with a career-best 54-hole total of 216 (+3)… Posted four rounds of even-par or better for the season… Carded a career-low round of 69 (-3) to open the Golfweek Conference Challenge… Tied for 27th at that event, the first of the season, to help BSU to a 15-stroke team victory… The win earned the Cardinals an initial Golfweek national ranking of No. 20, the program’s best ever.

2018-19 (Ball State): Competed in nine events as part of the Ball State lineup… Managed a 74.95 scoring average over 22 stroke-play rounds… Had his best finish of the season with a 16th-place result at the Butler Spring Invitational… Tied for 30th as BSU’s second-best finisher at the Chatham Hills Collegiate… Fired season-best rounds of 70 at Chatham Hills (-2) and the Musketeer Classic (-1)… His season-best 54-hole mark of 218 came at the Trinity Forest Invitational… Went 2-0-1 at the No. 6 position in the lineup at the Earl Yestingsmeier Match Play.

Prep: All-state as a senior… Won the State Preview that year with a 5-under 67 at Prairie View Golf Club… Also won his sectional championship… Qualified for the IHSAA state finals twice… Conference and regional medalist as a junior… Set the scoring record at the Duneland Athletic Conference Tournament with a round of 67… Named the Post-Tribune Golfer of the Year in 2016… Selected to participate in the 2016 Nature Valley First Tee Open at Pebble Beach… Won the 2016 Rocky Mountain Junior Tour Tournament of Champions… Placed in the top 10 in 2017 Golfweek Junior Tour events at The Fort and Notre Dame… Won his age group in the event at The Fort… The 2013 Greece Junior national champion in Athens… Tied for ninth at the Indiana Amateur, 15th at the Northern Amateur and 21st at the Indiana Open Championship in the summer before enrolling at Ball State.