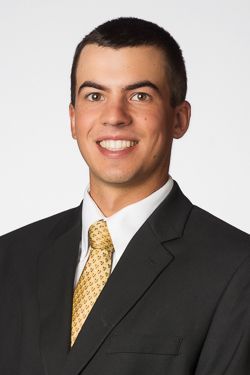 2021-22: Won the MVC Elite 17 Award, which is presented to the individual with the highest GPA among top finishers at the MVC Championship, for a second straight season... Repeated as the MVC Scholar-Athlete of the Year in addition to earning All-MVC status for a third straight season... Shattered his own program record for single-season scoring average at 71.35 and now owns the top three single-season scoring averages in modern program history... Achieved par or better in 20 of his 34 rounds while golfing in all 13 events... Season scoring average ranks fifth in the MVC record book (since 2003)... Finished his junior season with a career scoring average of 72.04 that sits atop the program record book... Boasted nine top-5 finishes in his 13 tournaments this season... Earned individual medalist honors in a 41-player field at the Dove Mountain Intercollegiate (Feb. 28 – March 1)... Also tied for first at the Spirit Hollow Fall Shootout and had three runner-up finishes, all in fields of more than 65 golfers... Six-time MVC Golfer of the Week this season and lifted his career MVC Golfer of the Week total to 11, becoming just the fifth player in conference history to win 11 career MVC weekly golf honors... Stroked a season-low 67 (-4) in the second round of the Zach Johnson Invitational on Sept. 27, tied for the seventh-best 18-hole score in modern program history... Tied for the third-best 54-hole score in modern program history with a 208 at the Zach Johnson Invitational... Also ranked in the top-10 in the Valpo record book for 54-hole score with a 211 at the Dove Mountain Intercollegiate... Posted a pair of 36-hole tournament scores that rank in the top 10 in program history in that category with a 140 at the Butler Spring Invitational and a 141 at the Twin Oaks Intercollegiate.

2020-21: Earned All-MVC honors for a second consecutive season… Tabbed the MVC Scholar-Athlete of the Year… Named the MVC Elite 17 Award winner, a prestigious honor that is presented to the individual with the highest grade point average among the top finishers at the MVC Championship… Posted a team-best 72.59 scoring average while golfing all 22 rounds over eight events… Turned in five top-5 finishes while boasting a team-best nine rounds of par or better… Named the MVC Golfer of the Week on three occasions… Finished with the second-best single-season scoring average in the program’s modern history (since its 2009 relaunch), narrowly missing his own mark of 72.57 from 2019-20… Finished his sophomore season atop the Valpo record book in career scoring average at 72.58… Had a team season-low round of 68 (-4) in the second round of the Lewis Flyer Intercollegiate on Sept. 28… Went on to post three more rounds of 68 during the season: Round 1 at Twin Oaks (March 22), Round 3 at Wright State (Aug. 19) and Round 2 at Butler (March 29)… Earned individual runner-up honors in a 108-player field and led the team with a 209 (-4) at the Twins Oaks Intercollegiate (March 22-23). That ranked tied for fourth in modern program history in 54-hole individual low in terms of overall score and tied for seventh in relation to par… Again led the team and posted his second straight individual runner-up nod, this time in a 70-player field at the Butler Spring Invitational (March 29-30). His 54-hole score of 210 (E) ranked tied for sixth in program history in overall score… Earned his first career individual medalist honor in the 87-player Wright State Invitational (April 18-19) by turning in a 210 (-3), again tied for sixth in 54-hole tournament low and tied for 10th in relation to par. That marked his third straight tournament as either an individual runner-up or medalist… Only two individuals in the program’s modern history (Nick Seitz once, Peter Webb three times) had achieved 54-hole scores of 210 or better before VanArragon did it in three straight tournaments… Led the team with his fifth top-5 finish of the year at the MVC Championship (April 26-27) in Flossmoor, carding a 224 over 54 holes… The performance in Flossmoor marked his ninth career top-10 finish… Earned MVC Commissioner’s Academic Excellence Award, MVC Academic Honor Roll and Valparaiso University Presidential Academic Honors… Named College of Arts & Sciences Dean’s Award recipient, an honor presented annually to the student-athlete with the highest GPA in the College of Arts & Sciences... Named the Valparaiso University Bill Steinbrecher Sportsmanship Award winner as part of the department's annual ARC Awards... Named to the CoSIDA Academic All-District Team.