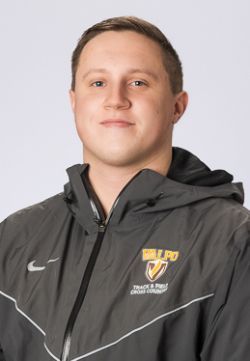 2021: Had a mark of 42-5.5 (12.94m) on Feb. 13 at the Indiana State Invitational… Posted the team’s top indoor weight throw of the year at 55-0.75 on Feb. 26 at the MVC Indoor Championships… Moved into third in program history in the outdoor discus with a toss of 159-6 on May 14 at the MVC Championships… Also cracked the program’s top five in the outdoor hammer at the MVC Championships, turning in a 177-5 (54.09m) that ranked fifth all-time… Earned MVC Commissioner’s Academic Excellence Award, MVC Academic Honor Roll and Valparaiso University Presidential Academic Honors.