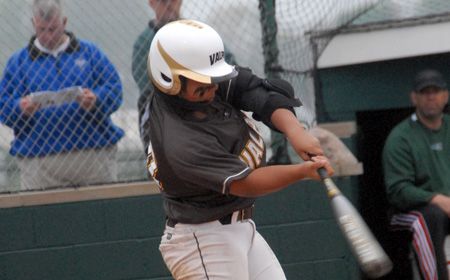 All cylinders were clicking on Saturday for Valparaiso, as the Crusaders earned an 8-0 run-rule shortened victory over Tennessee State in Auburn, Ala. at the War Eagle Classic to extend their winning streak to seven games.

The Valpo offense continued its torrid start to the 2010 campaign, picking up 16 hits in just six innings to improve its team batting average to .343 on the year.  Joylyn Ichiyama (Torrance, Calif./Redondo Union) led the way Saturday with a perfect 3-for-3 performance, while four other Crusaders had multi-hit games as well.

Meanwhile, Jill Jacobson (Beecher, Ill./Beecher) and Alex Lagesse (Beecher, Ill./Beecher) combined on a two-hit performance in the circle.  Jacobson started, her first start of the year at pitcher, and tossed 3.1 innings of one-hit ball, striking out five.  Lagesse entered in the fourth with the bases loaded and one out, and immediately induced a double play en route to throwing 2.2 innings of one-hit ball to earn the win and improve to 4-1 on the year.

“Obviously we continued to hit the ball well today,” said Crusader head coach Randy Schneider.  “We have the expectation that we’re going to keep hitting the ball, though, and the most important thing for us right now is to get our defense and pitching playing well.  I thought we excelled in both of those areas today as well.”

Valpo got on the board just two batters into the bottom of the first Saturday, as Hayley Bridwell (Lemont, Ill./Lemont) led off with a single and scored on a double by Sara Strickland (Phoenix, Ariz./Horizon).  Later in the frame, Kelsey Phalen (Batavia, Ill./Batavia) reached on a single and would come around to cross the plate on an RBI double from Jessie Marinec (Alsip, Ill./Marist).

The third inning saw the Crusaders push three more runs across the plate.  Strickland led off the frame with her second two-bagger of the game and was plated on an RBI single by Jordan Rutkowski (Alden, N.Y./Alden).  Rutkowski, who extended her hitting streak to 11 games with the base knock, also extended her run-scoring streak to 11 games later in the inning when she and Phalen both scored on a double off the bat of Ichiyama.

With a secure lead, it was time for the Valpo bench to step up and show what its made of, and it did so, led by freshman Tori Brown (Harrison, Ohio/Harrison).  After Ichiyama led off the fifth with a single, Brown came in as a pinch-hitter and promptly delivered a two-run homer, the first round-tripper of her career, off the scoreboard in left field.  Then, one inning later, pinch-hitter Lisa DeBruzzi (Carlisle, Mass./Concord-Carlisle) tallied a single and Brown, who had remained in the game at shortstop, stepped up with a double, followed by a throwing error on TSU’s left fielder to score DeBruzzi with the final run of the contest.

“It was a lot of fun to watch Tori come in off the bench and come up with two big hits for us,” said Schneider.  “Joy really hit the ball well today as well.  She got down to two strikes in each of her three at-bats, but focused well and hit line drives.  We just need to continue to play well and also continue to improve at the same time, as our schedule gets tougher in this coming week.”

Brown was joined by Marinec, Phalen and Strickland as the quartet of Crusaders each matched Tennessee State’s (3-9) total output of two hits on the day.  Phalen was the only Valpo player to score two runs, as seven different Crusaders crossed the plate Saturday.  TSU’s Caitlin Eaton took the loss, falling to 0-4 on the year after giving up four runs in two-plus innings of work.

Valparaiso (11-3) extended the best start in program history with Saturday’s win and has a chance Sunday with two wins to match the longest winning streak all-time.  The Crusaders play back-to-back contests tomorrow, facing Alabama State at 11:30 a.m. and host Auburn at 2 p.m.  Both games will have live stats available at www.valpoathletics.com.