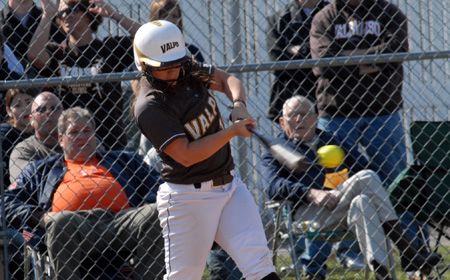 Down 4-0 after two innings in the nightcap Tuesday in Huntington, W.V., Valparaiso scored six runs over the next three frames and kept Marshall off the scoreboard the rest of the way to earn a 6-4 victory and a split of the doubleheader.  The Thundering Herd downed the Crusaders 8-0 in the day’s opener.

“I thought it showed the character of our players to bounce back after a really bad game in the opener,” said Crusader head coach Randy Schneider.  “We got more aggressive at the plate in the second game, took some more cuts at the ball and it paid off for us.  Marshall is a good team that just swept two from Cleveland last week, so it was a good win for our team and I’m happy to be able to have a split.”State

Marshall struck for a four-spot in the bottom of the second against the Crusaders in the second game of the day.  The Thundering Herd loaded the bases with one out and then got a sacrifice fly, a two-run double and an RBI single to take the 4-0 lead.

But Valpo struck back immediately in the third, denting the scoreboard for the first time on the day.  A one-out walk by Jennifer Hermanson (Beecher, Ill./Beecher) and a bunt single by Sara Strickland (Phoenix, Ariz./Horizon) put two on base.  Two batters later, Jordan Rutkowski (Alden, N.Y./Alden) kept her hot bat going with a double to right-center, plating both runners to bring the Crusaders back within two runs.

The deficit got sliced in half with the leadoff batter in the fourth inning, as Kelsey Phalen (Batavia, Ill./Batavia) led off the frame with a solo homer, her third round-tripper of the year.  Then with one on and one out, Tori Brown (Harrison, Ohio/Harrison) connected for her second home run of the season to put the Crusaders in front, 5-4.

Strickland reached with her second bunt single of the game in the fifth inning and Rutkowski eventually drove her in with a sacrifice fly for a key insurance tally to make it 6-4 Valpo.  Meanwhile, Sam McGee (Bloomington, Minn./Jefferson) set down 14 out of 15 batters after the four-run second, and when Marshall placed two on with one out in the bottom of the seventh, the sophomore induced back-to-back groundball outs to close out the victory for the Crusaders.

McGee scattered eight hits in the complete-game effort while striking out five, improving to a perfect 5-0 in 2010.  Marshall’s Caitlyn Jackson started and took the loss, falling to 3-3 after giving up five runs in 3.1 innings of work.  Strickland went 2-for-4 with two runs scored, while six other Crusaders tallied hits in the game as well.

The opener was a rough one for the Crusaders in all aspects, as they tallied just one hit, a Lisa DeBruzzi (Carlisle, Mass./Concord-Carlisle) single.  Valpo also committed five errors and two passed balls in the field as five of Marshall’s eight runs in the run-rule shortened game were of the unearned variety.

Alex Lagesse (Beecher, Ill./Beecher) took the loss in the circle for the Crusaders to fall to 5-2 after allowing five runs, only two of which were earned, on five hits and six walks in three-plus innings.  Shaleigh Jansen (Ottawa, Ill./Ottawa Township) pitched the final inning-plus for Valpo and pulled off a rare feat, striking out four batters in the fourth inning after entering in relief.  Katie Murphree bumped her record to 8-4 on the year with the complete-game win for Marshall (14-7).

"I’m not sure what it was in the first game, but we all just came out flat and played poorly,” said Schneider.  “I have to give our kids credit, though, for not letting it get to them and rebounding nicely in the second game.  We had a couple of players really step up today and perform when given the chance due to injuries.  Tori stepped right in and delivered the game-winning homer in the second game, and Hermanson did a good job filling in at right field for us.”

Valparaiso (13-5) now heads off for the final leg of its massive spring break road trip, traveling to Lawrence, Kan. to compete in the KU Invitational.  The Crusaders open play on Thursday afternoon at 4 p.m. against the host Jayhawks.  Live stats will be available for all tournament games through www.valpoathletics.com.