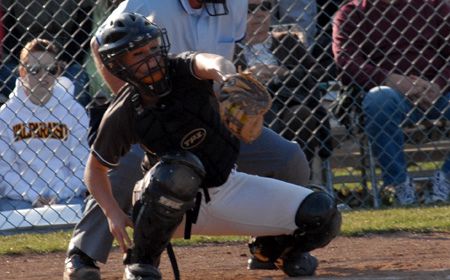 Valparaiso cranked out 13 hits Thursday afternoon at Big 12 foe Kansas, but a pair of Jayhawk three-run innings were too much for the Crusaders to overcome as they fall to the hosts, 6-5, in the opener of the KU Invitational.

“Obviously putting up 13 hits on a Big 12 school is pretty good, but I’m disappointed we didn’t come away with the win today,” said Crusader head coach Randy Schneider.  “We just got beat today because we didn’t do what we talked about doing before the game.  We weren’t as aggressive as we needed to be at the plate, getting caught looking at third strikes in key situations, and we didn’t manage the ball like we needed to in the field.”

Valpo got on the board first Thursday with a solo homer by Jordan Rutkowski (Alden, N.Y./Alden) in the top of the first, but a two-run homer and RBI single in the bottom of the second shifted the lead back to Kansas, 3-1.  Two innings later, the Crusaders tied things up again thanks to the longball.  Joylyn Ichiyama (Torrance, Calif./Redondo Union) led off the top of the fourth with a single and Jessie Marinec (Alsip, Ill./Marist) followed with her second round-tripper of the year to tie the game at three.

The Jayhawks regained the lead in the bottom of the fifth, as with the bases loaded and two outs, a single ended up plating three Kansas runs to give it a 6-3 advantage.  But the Crusaders struck back immediately, as Marinec led off the sixth with a double and Lisa DeBruzzi (Carlisle, Mass./Concord-Carlisle) followed two batters later with a single to put two on and one out.  Pinch-hitter Tori Brown (Harrison, Ohio/Harrison) stepped up and continued to swing a hot bat, scoring both runners with a double to right-center to cut the deficit to one run.

But Brown was thrown out trying to advance to third, and Sara Strickland (Phoenix, Ariz./Horizon) would be unable to advance after reaching on a two-out single.  In its last chance at-bat, Valpo put runners on first and second with nobody out and advanced both players with a sacrifice bunt, but the Jayhawks induced a groundout and a flyout to end the game.

Five different Crusaders tallied multi-hit games on Thursday, while Marinec scored twice and drove in two runs.  Valpo pitchers Sam McGee (Bloomington, Minn./Jefferson) and Alex Lagesse (Beecher, Ill./Beecher) each threw three innings and combined to hold the Jayhawks to just six hits, but the latter took the tough-luck loss, giving up three unearned runs to fall to 5-2 on the year.  Kansas (10-10) got four innings from starter Allie Clark, while reliever Sarah Vertelka earned the victory to improve to 4-6.

“Pitching-wise, we talked about keeping the ball in the park today, and Kansas’ one home run really hurt us,” said Schneider.  “Other than that, I thought both Sam and Alex did a good job today spreading out their hits and pitching well.  We just didn’t manage the ball like we needed to, and that ultimately cost us.  I really felt like we were the better team today, but credit Kansas for figuring out ways to score runs and get the victory.”

Valparaiso (13-6) continues play at the KU Invitational with just one game on Friday after schedule adjustments due to weather concerns.  The Crusaders will again face the host Jayhawks, this time at 2 p.m.  Live stats will be available at www.valpoathletics.com.