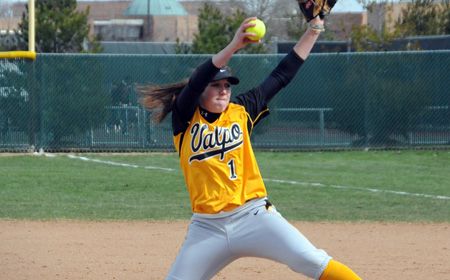 Sophomore Sam McGee (Bloomington, Minn./Jefferson) had her no-hit bid spoiled with one out in the sixth of the nightcap Saturday, but that was the only thing that went against Valparaiso in a 9-1, six-inning victory over UIC in Chicago.  The Flames earned a 5-2 win over the Crusaders in the opener.

McGee retired 16 of the first 18 batters she faced in the second game, as only an error in the third and a full-count walk in the fifth kept her from being perfect through 5 1/3 innings.  But pinch-hitter Claire Donyanavard fouled off three pitches after falling behind 0-2 and then lined a single back through the middle for the Flames’ only hit of the game.  A throwing error two batters later by McGee allowed the unearned tally to cross the plate, but the sophomore closed out the complete game and improved to 11-3 by inducing a groundout to third.

Meanwhile, the Crusader offense erupted, as after scoring just 14 runs over its previous seven games, it put nine runs up on the scoreboard.  The scoring started in the second, as Kelsey Phalen (Batavia, Ill./Batavia) led off the inning with a single and two batters later, Jessie Marinec (Alsip, Ill./Marist) came up with an infield single to shortstop.  KC Boldt (Red Wing, Minn./Red Wing) and Sara Strickland (Phoenix, Ariz./Horizon) then tallied back-to-back infield singles, Boldt’s a bloop that the Flame second baseman lost in the sun and Strickland’s a slow chopper back up the middle, driving in a run apiece.

The next inning saw pinch-runner Hayley Bridwell (Lemont, Ill./Lemont) come around to score on a hard double to the center-field wall by Jordan Rutkowski (Alden, N.Y./Alden).  Marinec then laid down a perfect squeeze bunt on which Phalen beat the throw home to increase the Crusader edge to 4-0.  Lisa DeBruzzi (Carlisle, Mass./Concord-Carlisle) followed with a sharply-hit single into left-center to score Rutkowski, and Marinec would score Valpo’s sixth run of the game on a wild pitch later in the frame.

Valpo put up the game’s deciding tallies in the top of the sixth inning.  With one out, the Crusaders posted four straight singles, with a Phalen single up the middle scoring Joylyn Ichiyama (Torrance, Calif./Redondo Union) and a Rutkowski base knock through the right side of the infield plating Phalen and Sadie Conner (Washington, Ill./Washington).  That concluded the Crusader offensive output of 13 hits, as a quintet of Valpo players had multi-hit games, while Phalen scored three runs and Rutkowski drove in three.  Ashley Hewett, the first of three UIC pitchers, took the loss to fall to 5-14 after giving up six runs (four earned) in 2.1 innings.

“I liked the way that our kids decided to come back the second game,” said Crusader head coach Randy Schneider.  “We hit the ball a bit better and played much better defense.  Of course, having Sam go into the late innings with a no-hitter is a great thing. We were all pretty much on the edge of our seat in the sixth inning, but she just missed one pitch to their pinch-hitter, maybe the only pitch she missed all day.  Overall, we’re happy it gives us a chance to wake up tomorrow and do everything we can to win the series.”

In the day’s first game, Valpo jumped out to a 2-0 lead through three innings.  The first run went up in the second, as with two outs, Marinec got hit by a pitch and DeBruzzi followed with a sharp grounder that rolled all the way to the left-center wall to score Marinec.  The Crusaders added to their edge with a two-out infield single by Conner in the third off the glove of the UIC third baseman, which scored Bridwell in a pinch-running role.

But that would be it for the Crusader offense in the opener, as despite taking six walks and being handed six errors by UIC (10-28, 3-6 Horizon), Valpo could tally just two hits over seven innings and left 11 runners on base.  Meanwhile, the Flames strung together four hits with a pair of Valpo errors in the fourth inning to score four runs, just one of which was earned, and added an insurance tally in the fifth frame.

“I think game one a big part of it came down to key hits,” said Schneider.  “When you have that many people on base, you have to be able to score more runs.  I was disappointed we didn’t come up with key hits in those key situations, I think if we had it would have changed the dynamics of the game.  Defensively, I thought Alex did a pretty good job getting ground balls.  It was just one inning, the fourth inning, that really was the difference in the game and produced a split today.  We have a great deal of confidence in Alex and thought it was best to stick with her to get us out of the inning, we just didn’t manage the ball well.”

Alex Lagesse (Beecher, Ill./Beecher) took the loss for the Crusaders, falling to 11-5 after giving up all five runs (two earned) on eight hits in 4.1 innings.  Devin Miller earned the complete-game win for the Flames to improve to 4-12.

Valparaiso (27-11, 7-2 Horizon) returns to Flames Field on Sunday afternoon at 1 p.m. for the series finale against UIC.  Live stats and live chat will be available at www.valpoathletics.com.