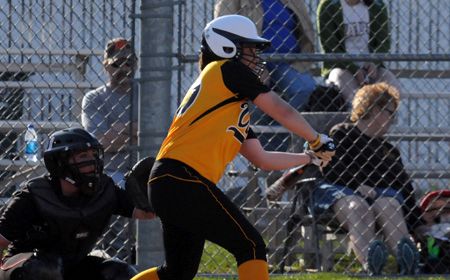 A two-run homer in the fourth inning by freshman Jennifer Hermanson (Beecher, Ill./Beecher) was the difference Friday morning, as fourth-seeded Valparaiso defeated third-seeded UIC, 4-3, in an elimination game in the 2010 Horizon League Championship.  With the victory, the Crusaders will play again this afternoon at 3:30 p.m. CDT.

“I really didn’t know what to expect this morning after a tough loss in yesterday afternoon’s game,” said Crusader head coach Randy Schneider.  “But we maintained our level of intensity and came back out this morning ready to play.  I give our kids a lot of credit, they learned from yesterday’s game and rebounded quite well.”

The Crusaders cracked the scoreboard immediately in the top of the first inning.  Sara Strickland (Phoenix, Ariz./Horizon) led off the game with a four-pitch walk and promptly stole second.  Joylyn Ichiyama (Torrance, Calif./Redondo Union) followed with a single to move Strickland over to third.

With runners on the corners, Valpo perfectly executed a double steal, as Strickland beat the return throw home for the first run of the ballgame.  Ichiyama moved up to third as well when the throw home got away from the Flames’ catcher with what turned out to be a key advance.  Jordan Rutkowski (Alden, N.Y./Alden) hit a grounder to short in her at-bat and the throw came home, but Ichiyama slid in ahead of the tag to give the Crusaders a two-run edge.

The Flames cut the Valpo lead in half in the bottom of the first on a one-out solo homer to right-center by Stephanie Chavez.  UIC then claimed the lead in the bottom of the third, as Brooke Frydendall took a two-out walk after a dropped foul ball earlier in her at-bat.  Shannon Kehr stepped to the plate and hit the first pitch to straightaway center to put the Flames ahead, 3-2, and chase Crusader starter Sam McGee (Bloomington, Minn./Jefferson) from the circle.

But the Crusaders would trail for only three batters.  Lisa DeBruzzi (Carlisle, Mass./Concord-Carlisle) led off the fourth with a walk and advanced to second on a sacrifice bunt.  The freshman Hermanson then stepped to the plate and ripped the first pitch she saw over the right-center wall for her third homer of the season, giving Valpo a lead it would not relinquish.

“It was great seeing Hermanson step up to the plate and get a big hit for us after not having played yesterday,” said Schneider.  “I also was happy to see KC Boldt (Red Wing, Minn./Red Wing) step into the lineup and advance runners for us.”

It looked like UIC (22-35) would tie it up in its half of the fourth.  With pinch-runner Melissa Preish on second and two outs, Melinda Macias drilled a hard shot into right field.  Rutkowski, making just the sixth outfield start of her career, scooped it up on one bounce and threw a perfect one-hopper to the plate, where DeBruzzi applied the shoulder tag to Preish to maintain the Crusader lead.

While that was the Flames’ best opportunity to tie the game, Crusader reliever Alex Lagesse (Beecher, Ill./Beecher) had to throw out of jams in each of the final three innings as well to maintain the lead.  In both the fifth and sixth innings, UIC advanced a runner to second with one out.  Then, in the final frame, Macias stood just 60 feet away with two outs, but Lagesse induced a groundout from Kehr to Jessie Marinec (Alsip, Ill./Marist) to end the ballgame and secure the win.

“Overall, we played good defense this morning and platooned our pitching staff effectively in order to get the win,” said Schneider.  “We got the innings we needed out of Sam, and then Shaleigh and Alex stepped in and finished it off for us.”

McGee went 2.2 innings in the start for Valpo, giving up just one earned run.  Shaleigh Jansen (Ottawa, Ill./Ottawa Township) earned the victory as the pitcher of record, improving to 5-3 with one scoreless inning of work, while Lagesse registered her first career save, throwing 3.1 innings of shutout softball one day after tossing more than 240 pitches in a pair of complete games.  Ashley Hewett started and took the loss for UIC, falling to 12-16.

“If our hitting wakes up and we can continue to pitch and play defense like we have so far this tournament, we could really make some noise,” said Schneider.  “But we’ve still got our work cut out for us to continue to advance.”

Valparaiso (34-20) advances on in the elimination bracket of the 2010 Horizon League Championship and will face Green Bay.  Live stats and live chat will be available at www.valpoathletics.com.