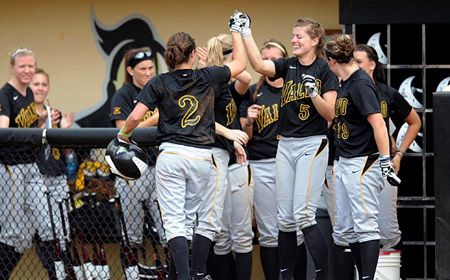 The Valparaiso softball team gave #8/5 Michigan its toughest test of the 2011 season to date, heading into the seventh inning tied on Tuesday afternoon, but the undefeated Wolverines pushed across a run in the bottom half of the frame to hand the Crusaders a 2-1 defeat in Orlando, Fla.  Valpo was unable to come up with a similar effort in the nightcap, falling 6-1 against UCF.

“We played really well in game one,” said Crusader head coach Jordan Stevens.  “Alex threw a great game and we made some key defensive plays that kept us in the game.  We played really well to compete with a top-ten Michigan team that came in 15-0.  To really have them on the ropes and have them starting to worry about maybe picking up a loss was impressive.”

Valpo had a golden opportunity to strike first against the Wolverines in the top of the opening frame, as junior Sara Strickland (Scottsdale, Ariz./Horizon) led off the game with a walk and senior Jill Jacobson (Beecher, Ill./Beecher) followed with an infield single.  After a pair of strikeouts, the duo executed a double steal to put two runners in scoring position, but a groundout ended the threat.

Michigan would score in its first plate appearance, though, to take the early advantage.  With two on and one out, Amanda Chidester delivered an RBI single into center field to score Bree Evans with the game’s first run.  But junior Alex Lagesse (Beecher, Ill./Beecher) bore down in the circle, getting a strikeout and a groundout to limit the damage and strand the two baserunners.

Stranding baserunners became the story of the day for the Crusader defense.  Lagesse and her fielders left nine Michigan runners on base through the first six innings, including five in scoring position.  Strickland came up with a key defensive play in the fourth, throwing out Brandi Virgil at the plate as she attempted to score from second on a single.  Then in the fifth, with the bases loaded and two outs, Lagesse induced a foul-out to shortstop Angie Doerffler (Fort Wayne, Ind./Concordia Lutheran) to keep the Wolverines at just one run.

Meanwhile, Valpo was able to tie the game without the benefit of a hit in the top of the third.  Doerffler led off the frame by taking one for the team, getting hit by a pitch, and advanced over to third thanks to a sacrifice bunt and a groundout.  Junior Jordan Rutkowski (Alden, N.Y./Alden) drew the two-out walk, and with runners on the corners, the Crusaders perfectly executed the double steal as Doerffler crossed the plate with the tying run.  But Valpo couldn’t get more than the one run across, and two-out singles by sophomore Jessie Marinec (Alsip, Ill./Marist) in the fourth and junior Kelsey Phalen (Batavia, Ill./Batavia) went for naught as well.

Michigan would score the game-winning run in walkoff fashion in its half of the seventh.  The Wolverines started the final inning with a single and a walk, and a sacrifice bunt followed which moved the duo into scoring position.  An intentional walk was issued by Lagesse to load the bases and set up a force at any bag, and a pop-out left the Crusaders one out away from averting this threat as well.  But Caitlin Blanchard’s hard-hit grounder to the left side was mishandled by the Valpo defense, allowing Nicole Sappingfield to score the game-winner.

“On the flip side, we can't be happy just competing,” said Stevens.  “We were in the game with an opportunity to win and we couldn't come through.  We allowed them a shot to get it done in the seventh, and they're a good team, they're going to eventually come through.  That said, I was still happy with the way we played.  Our defense was phenomenal and Alex threw a fantastic game.  We just have to find a way to come out on top in that sort of game.”

Lagesse tossed a great game for the Crusaders against one of the nation’s top-10 teams, scattering seven hits and giving up just one earned run in her 6.2 innings of work, but fell to 2-3 on the season.  Stephanie Speierman earned the complete-game win for Michigan (16-0), improving to 8-0 with a three-hitter, striking out nine.

UCF (5-11) gained the lead quickly in the nightcap for the Crusaders, as Allie Jest led off with a single and scored immediately on a triple by Natalie Land.  Land would later score as well on an RBI groundout as the host Knights took an early 2-0 lead.

Valpo cut the deficit in half in its next time at-bat.  Sophomore Tori Brown (Harrison, Ohio/Harrison) reached second on an error to lead off the inning and then took third on a wild pitch before scoring on an RBI single from Marinec.  The latter would eventually advance to second on another wild offering, but the Crusaders could move her along no further.  A one-out single and steal by Hayley Bridwell (Lemont, Ill./Lemont) in the third was the only other runner Valpo could get into scoring position the rest of the way, while UCF scored two in the fourth and two in the fifth to close the scoring.

“I would like us to put two consistent efforts together,” said Stevens.  “We came out flat, with no energy, in the game against UCF and let them take control of the game from the first pitch.  If we play that way against the types of teams we’re playing down here, teams that went to the NCAA Tournament and won 30 or more games last year, they're going to beat us.  It was a disappointing way to end the day after competing very well in the first game.”

Valparaiso (5-6) takes a couple days off before starting play at the Lipton Invitational in Gainesville, Fla., hosted by #2/3 Florida.  The Crusaders open tournament action Friday morning at 7:30 CST against North Dakota State before facing the host Gators at 3:15 p.m.