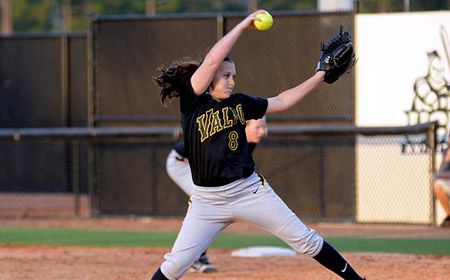 The Valparaiso softball team will be leaving Florida on a winning note, as the Crusaders closed out their spring break trip Friday at the Rebel Spring Games in Kissimmee, Fla. with a 3-0 victory over Wagner and an 11-5 win over Penn, extending their winning streak to five games.

“It’s always nice to end a trip on a winning note,” said Crusader head coach Jordan Stevens.  “We played well over our last five games and have gotten a lot out of this trip.  A lot of good things happened to us, and we also found a lot of things we need to work on to get better when we get back.  Overall, it was definitely a successful trip for us.”

The Crusaders hit the board against Wagner beginning in the top of the second, as junior Jordan Rutkowski (Alden, N.Y./Alden) launched a one-out solo homer, her team-best fifth of the season.  It also marked Rutkowski’s 13th career round-tripper, tied for third all-time at Valpo.  Senior Sadie Conner (Washington, Ill./Washington) followed with a single, moved up to second on an infield single by senior Jill Jacobson (Beecher, Ill./Beecher) and eventually scored on a base knock by freshman Amanda Wisniewski (Lake in the Hills, Ill./Huntley).

Valpo added an insurance tally in the third inning to take a three-run lead over the Seahawks.  With one out, freshman Angie Doerffler (Fort Wayne, Ind./Concordia Lutheran) lined a single down the left-field line to put a runner on for junior Sara Strickland (Scottsdale, Ariz./Horizon), who rapped a double into left-center to score Doerffler and give Valpo a 3-0 advantage.  Doerffler’s hit was part of a 3-for-3 performance, her first career three-hit game.

“Bolton deserved to start today, because she’s been throwing very well for us down here,” said Stevens.  “She’s come into games against some of the best teams we’ve played and done a nice job.  She really earned her start today and made the most of her opportunity.”

Back-to-back one-out doubles in the bottom of the first by Doerffler and Strickland against Penn scored the former with the game’s first run, while Strickland eventually scored  on a single from Rutkowski to give Valpo a 2-0 lead.  Then in the third, singles by Doerffler and senior KC Boldt (Red Wing, Minn./Red Wing) and a Rutkowski hit by pitch loaded the bases, and junior Kelsey Phalen (Batavia, Ill./Batavia) delivered her first career grand slam to stake Valpo to a six-run lead.

Later in the third, Doerffler came back around in the order with the bases loaded and drew an RBI walk to score sophomore Jennifer Hermanson (Beecher, Ill./Beecher) to give the Crusaders a 7-0 lead after three innings.  Valpo then added another tally in the fourth on a solo home run by Boldt to put itself in position to win via run-rule, but the Quakers scored four runs in the fifth on an RBI single by Stephanie Caso, an RBI double from Brooke Coloma and a 2-RBI single by Kayla Dahlerbruch to stay alive.

Valpo responded immediately with another run in its half of the fifth, as a two-out walk by Doerrfler eventually turned into a run thanks to a Strickland double and a passed ball.  Penn added another run in the top of the sixth, but back-to-back errors in the bottom half of the frame allowed Rutkowski to score Valpo’s tenth run.  A double from Phalen then plated Conner with the game’s final run.

Junior Sam McGee (Bloomington, Minn./Jefferson) earned the win against the Quakers to improve to 6-3, tossing 4.1 innings.  Taylor Tieman took the loss for Penn (5-3), giving up 7 runs in 2.2 innings of work while falling to 1-1 on the year.  A quintet of Crusaders picked up two hits apiece in the game, while Phalen drove in a career-high five runs and Doerffler scored three runs.  Doerffler went 2-for-2 with a pair of walks in the win, meaning she has now hit safely in seven straight at-bats and has reached base in nine consecutive plate appearances.

“It’s obviously nice to get production out of the top of the order, and Angie has been producing for us since moving into the two-hole,” said Stevens.  “We know what we’re going to get from her every at-bat.  She swings the bat well every time she goes up to the plate, and does the little things correctly to put herself in a position to be successful.”

Valparaiso (12-10) takes the next 10 days off before heading to Indianapolis on Tuesday, Mar. 22 for a doubleheader with former Mid-Con opponent IUPUI.  First pitch of game one is slated for 3 p.m. CDT.