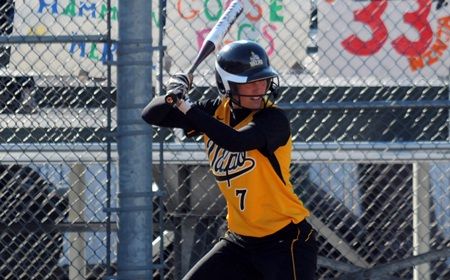 Valparaiso completed a three-game series sweep of Wright State by taking both ends of a doubleheader Thursday afternoon at the Valparaiso University Softball Field, winning the opener via run rule, 11-1 in six innings, before earning a 4-2 victory in the nightcap.  The pair of wins moves the Crusaders into second in the Horizon League standings with just two league series remaining.

“Winning yesterday's game the way that we did, I think carried over into today,” said Crusader head coach Jordan Stevens.  “I thought we came out with a really good energy today.  We played three solid games this series, and put together two very good games today.  Our pitchers threw well today, and we put some good swings on [DeWitt] over the course of the two games.”

A pair of Crusader juniors broke ties atop the Valpo career charts in their respective categories on Thursday as well.  Sara Strickland (Scottsdale, Ariz./Horizon) picked up her 40th career double in the sixth inning of the opener, breaking a tie for most career doubles with Shannon Robinson.  Jordan Rutkowski (Alden, N.Y./Alden) then snapped a tie with Ashley Wolter atop the Crusaders' all-time RBI leaders with a three-run homer to cap the run-rule victory in the day's first game.

The Crusaders jumped atop the Raiders in the opener in their first at-bat.  Freshman Angie Doerffler (Fort Wayne, Ind./Concordia Lutheran) reached base with a one-out double to the right-center gap.  After a Strickland walk, senior KC Boldt (Red Wing, Minn./Red Wing) dropped a single into shallow right field, just inside the foul line, to load the bases.  With two outs, WSU hurler Krystian DeWitt unleashed a wild pitch, allowing all three runners to move up 60 feet and plating Doerffler with the game's opening run.

Doerffler would have an even easier time crossing the plate with Valpo's second run of the ballgame.  The rookie led off the third with a single through the right side of the infield, and Strickland knocked a single through much the same place to move Doerffler up to second.  Two batters later, Rutkowski grounded one through the left side, loading the bases with one away.  Following a pitching change and an out, junior Kelsey Phalen (Batavia, Ill./Batavia) stepped up, and much as she did for an insurance run on Wednesday, watched five straight pitches and drew a bases-loaded walk, forcing Doerffler home to give Valpo a 2-0 lead.

WSU finally cracked the scoreboard in the fifth, getting a two-out single from Justine Shilt that scored Mollie Berry from second, but Crusader starter Sam McGee (Bloomington, Minn./Jefferson) induced a low pop-up to short with two runners still on base to keep Valpo in front.  The Crusaders then responded with a pair of insurance runs in their half of the fifth, as Strickland led off with a walk.  After a pair of outs, senior Sadie Conner (Washington, Ill./Washington) stepped in and, after fouling off a pair of pitches, drove a ball to deep right-center against the prevailing wind that got out for a two-run homer.  The round-tripper was the 20th of Conner's career, placing her alone in second place in the Crusader annals.

But the first five innings proved to be just an appetizer for the offensive buffet that presented itself in the bottom of the sixth.  Junior Alex Lagesse (Beecher, Ill./Beecher), in the lineup as the designated player in game one, drove a no-doubt homer over the right-field fence on the inning's first pitch, her first career four-bagger and a harbinger of things to come the rest of the frame.  Back-to-back walks to freshman Amanda Wisniewski (Lake in the Hills, Ill./Huntley) and sophomore Tori Brown (Harrison, Ohio/Harrison) and a single by Doerffler to shallow left field would load the bases with still nobody out.

Strickland stepped up and delivered her record-breaking double, scoring the lead two runners and advancing Doerffler to third to push the Crusader advantage to 7-1.  After falling behind in the count 0-2, Boldt fought back and then grounded a hard single back through the box to plate Doerffler and put Valpo on the brink of the run-rule victory.  Still with nobody out, Rutkowski stepped in and ascended to the top of the career RBI chart by herself in style, drilling an 0-2 pitch over the center-field fence to close out the win in the opener.

McGee went the distance in the opener for Valpo, improving to 13-5 after scattering seven hits in her six innings of work, striking out five.  DeWitt took the loss for Wright State, surrendering six hits and a pair of runs in 2.1 innings before being relieved by Chelsea Contant, who went the rest of the way.  Doerffler went 3-for-4 with three runs scored to lead the Crusader offense in the opener, while Strickland, Boldt and Rutkowski each picked up two hits following Doerffler in the order.

Just as in the opener, the Crusaders cracked the scoreboard in the bottom of the first of the nightcap.  With two outs, Strickland lined a single into center field and moved up to second on a grounder through the right side by Boldt.  Rutkowski then knocked a single through the right side as well, plating her fellow junior with the game's first run.  Rutkowski also picked up an RBI for Valpo's second run, as after DeWitt walked the bases loaded in the bottom of the third, the junior hit a slow roller to second that gave Doerffler just enough time to beat the throw home.

Wright State needed just one swing of the bat to tie the game in the top of the fifth, however.  With two runners in scoring position, Louie Haney delivered a two-run double just to the right of straightaway center, knotting the game at two.  But for the fourth straight time over the last four games when surrendering a lead, the Crusaders responded immediately in their half of the inning to re-claim the lead.  Boldt led off the inning with a double down the right-field line, but was erased at third on an infield grounder by Rutkowski.

A double over the head of the WSU left fielder by Conner moved Rutkowski up into scoring position with one out as well, and then another walk by Phalen loaded the bases.  Lagesse grounded a pitch back to the circle, with the Raiders coming home to force Rutkowski for the inning's second out.  But with the bases still loaded, Wisniewski stepped into the batter's box and worked a full count before driving a ball to the right-field wall to score Phalen and Conner with the crucial runs.  Lagesse was gunned down at the plate, but it would prove of no consequence, as Wright State could not get the potential tying run past the batter's box in either of the final two innings.

“That's been a process for us all year, having the mindset that we're just going to stay tougher than the other team,” said Stevens regarding the Crusaders' recent ability to answer immediately after giving up the lead.  “We just stick with what's working for us, and don't get off the plan because our opponents put up a couple runs.  We've done a really nice job lately of staying up in those situations and being able to produce.”

Lagesse earned her second complete-game victory in as many days, giving up just seven hits and no walks while striking out five to improve to 11-10.  DeWitt took the loss in all three games of the series for Wright State (18-21, 7-5 Horizon), falling to 12-14 as she was saddled with the decision in the nightcap after surrendering ten hits and five walks in a complete-game effort.  Wisniewski was a perfect 3-for-3 at the plate in the nightcap, while Boldt tallied multiple hits for the second time on the day to close out a series in which she went 5-for-8.

Valparaiso (28-17-1, 11-6 Horizon), which is now percentage points ahead of Loyola for the second spot in the Horizon League standings, will not return to league play for ten days.  In between now and then, the Crusaders have a pair of non-league single games at home, the first of which is slated for Saturday against IPFW.  First pitch is scheduled for 1 p.m., and all the action can be heard live on WVUR, 95.1 FM, Valparaiso and online at www.valpoathletics.com, which will also have a link for live stats.

“What this time does is really give us an opportunity to work to get better daily,” said Stevens.  “It gives us some practice time, which we haven't had in a couple weeks, and gives us a chance to get back to work.”