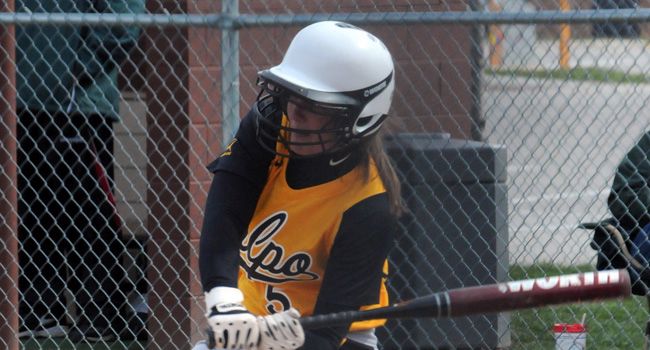 Jill Jacobson drew a pair of walks and drove in a run in her final game as a Crusader. (Ray Acevedo)
Valparaiso at Butler | May 13, 2011
Related Links
Related Links

Valparaiso put the potential tying and go-ahead runs on base in the seventh inning of an elimination game in the 2011 Horizon League Softball Championship Friday evening against Butler in Chicago, Ill., but in the end, the Crusaders came up one run short, falling to the Bulldogs, 5-4 to conclude the 2011 season.

In a back-and-forth game where the winner would move on to championship Saturday, Butler struck first in the bottom of the second inning.  Jessica Huey led off the frame with a single through the right side of the infield.  Jenny Esparza, who started the game as the Bulldogs' designated player, then took the first pitch and hit a homer into the net over the left-field fence, giving Butler a 2-0 lead.

Valpo answered immediately in the top of the third, equalizing the score at two apiece.  Junior Kelsey Phalen (Batavia, Ill./Batavia) led off the inning with a walk, and back-to-back singles by junior Alex Lagesse (Beecher, Ill./Beecher) and freshman Amanda Wisniewski (Lake in the Hills, Ill./Huntley) loaded the bases with nobody out.  Senior Jill Jacobson (Beecher, Ill./Beecher) grounded into a fielder's choice forceout at third, plating Phalen with Valpo's first run, and then two more singles by freshman Angie Doerffler (Fort Wayne, Ind./Concordia Lutheran) and junior Sara Strickland (Scottsdale, Ariz./Horizon) scored Wisniewski to tie the game.

Valpo then took the lead in the top of the fifth thanks to the combined efforts of their freshman middle infielders.  Wisniewski led off with a infield single to third and then moved up to third on a sacrifice bunt.  Doerffler then sent a hard shot down the line off the third baseman's glove for a single, moving Wisniewski over to third with one out.  Two batters later, on the third pitch of the at-bat, Doerffler took off for second and was actually hit in the helmet with the throw down while trying to get caught in a run-down, allowing Wisniewski to scamper home to give the Crusaders a 3-2 lead.

But Butler responded in its half of the fifth, scoring two runs despite not getting a ball out of the infield.  An error and then an infield single just in front of the plate put two runners on with nobody out.  Then, after the runners were sacrificed to second and third with one out, Erin Falkenberry laid down a squeeze bunt and beat it out for a single, scoring Krista Hakola to tie the game at three.  Two batters later, a wild pitch allowed Erin Jackson to come home, giving Butler a 4-3 edge.

The Crusaders seemed destined to tie the game in their next at-bat, as with one out, senior Sadie Conner (Washington, Ill./Washington) launched a fly to deep center field that looked like it would have the distance for a game-tying home run.  But Jackson, playing center field for the Bulldogs, retreated to the fence and robbed Conner, reaching over the barrier and catching the ball while falling into the fence to keep the Crusaders down by one.  Butler added an insurance run on a trio of singles in its half of the sixth to take a 5-3 lead.

Valpo had one last threat left in the top of the seventh.  Lagesse led off the frame with a walk, and two batters later, Jacobson walked as well to move pinch-runner Hayley Bridwell (Lemont, Ill./Lemont) into scoring position.  Doerffler followed with a bunt single on the infield, loading the bases with one out for the middle of the Crusader order.  Strickland lifted a fly to deep center, but it came down in the field of play for a sacrifice fly, more than deep enough to score Bridwell and make it 5-4.  But a strikeout ended the Crusaders' hopes of advancing to the championship game Saturday.

Junior Sam McGee (Bloomington, Minn./Jefferson) took the loss for Valpo, giving up four runs, only two of which were earned, in 4.1 innings in her start, falling to 17-7.  Lagesse tossed the final 1.2 innings for the Crusaders.  Esparza took the circle for Butler (31-23) in the middle of the fifth and earned the victory to improve to 17-9.  Doerffler registered three hits to lead the Valpo offense, while Wisniewski picked up a pair of base knocks and scored two runs.

The loss concludes the Crusaders' 2011 campaign at 34-21-1.  Along the way, Valpo finished second in the Horizon League regular season standings, missing out on a share of the league title by just one-half game, and set new team single-season records for RBIs (245) and home runs (49).  Individually, senior KC Boldt (Red Wing, Minn./Red Wing) set a new Valpo single-season mark with 11 home runs, while both Boldt and junior Jordan Rutkowski (Alden, N.Y./Alden) set a new single-season RBI record with 42 runs driven in.

The loss also closes out the careers of the trio of Crusader seniors: Boldt, Conner and Jacobson.  The three seniors won a new program-best 124 games over their four-year careers, helping to guide Valpo in its transition to the Horizon League.  Conner closes her career as well tied atop Valpo's career record book with 22 home runs over her four years.