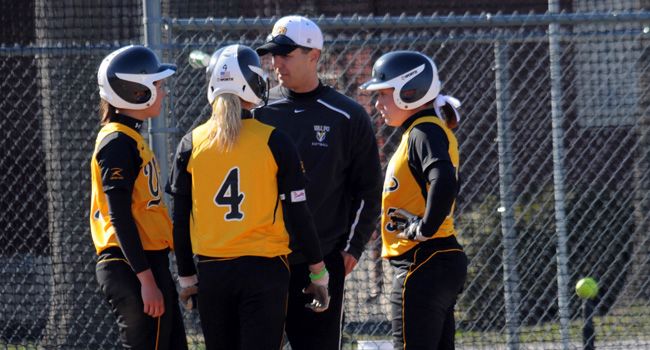 Next Up in Crusader Softball: Valparaiso continues its annual spring break trip as it kicks off the Diamond Devil Classic in Tempe, Ariz. with its second straight game against New Mexico State on Friday.  The Crusaders will also take on host #5 Arizona State on Friday evening, and will face Creighton, Pacific and East Carolina over the duration of this weekend’s tournament.

Previously: Valpo extended its winning streak to six games last weekend at the UTEP Invitational, defeating Iowa State for the second time this year (16-7), Brown (10-2 in 5 innings) and UTSA (10-6).  The Crusaders dropped the tournament finale against host UTEP, 7-6.  Valpo then won a midweek game against New Mexico State, 9-1.

Following the Crusaders: Live stats for select games from the Diamond Devil Invitational will be available through www.valpoathletics.com.

Head Coach Jordan Stevens: Jordan Stevens is in his second season at the helm of the Valparaiso University softball program in 2012 after leading the Crusaders to a successful season in his first year in charge in 2011.  Stevens, who now owns a record of 44-24-1 at the helm of the Crusaders, guided Valpo to 34 victories in his debut campaign, just one win shy of the program's single-season record.  Valpo finished Horizon League play with a 15-7 record, finishing just one-half game out of the regular season championship, and was within one run of advancing to the league tournament championship.

Series Notes: Valpo had faced just two of this week’s five foes previously in program history (prior to Tuesday’s NMSU game), but met both the squads just last season.  The Crusaders are 0-2 all-time against Creighton, including a 2-1 loss to the Blue Jays last season on Feb. 12 at Iowa State.  Jordan Rutkowski went 2-for-3 with a solo home run in that contest.  Valpo only lost its only all-time meeting with Pacific last year on March 5 at Florida, 7-1, a game in which Angie Doerffler and Sara Strickland each had two hits apiece.

Best Start Ever: Valpo’s six-game winning streak pushed the club to a 10-2 record through 12 games, marking the first time in program history the Crusaders had suffered just two losses through their first 12 contests.  While Valpo lost at UTEP to end its winning streak, the win over NMSU on Tuesday moved the Crusaders to 11-3 through 14 games for just the second time in program history, matching the 2010 squad which set the program record with a 35-win season.

Offensive Bonanza: Last weekend saw the Crusader offense cranked up in high gear for all four games, and Valpo continued to break out the bats in Tuesday’s win over NMSU.  Valpo posted its second-longest streak of double-digit outputs in program history, scoring in double figures in three straight games, including a 16-run output against Iowa State, the fifth-most runs in a single game in Crusader history.  Over their last five games, the Crusaders are hitting .413 as a team (62-for-150) with 25 extra-base hits, including 10 home runs, and have scored 51 runs.

Walks vs. Strikeouts: Last season, the Crusaders struck out more than twice as often as they drew walks (317 Ks, 146 BBs), but this season so far, they have been much more efficient at the plate.  Valpo batters have struck out just 51 times through the season’s first 14 games, an average of just 3.6 Ks/game, and have walked 40 times.  Meanwhile, Valpo pitchers are averaging about 2.5 strikeouts for every walk, registering 73 strikeouts against just 29 walks through 14 games.  Over the last five games, Valpo hitters have actually drawn more walks (19) than strikeouts (18).

League Honorees: Through three weekends of play, the Crusaders already have tallied four Horizon League weekly award winners.  Most recently, senior Jordan Rutkowski earned her second straight Player of the Week accolade (the third of her career) from the league office following her impressive weekend at the UTEP Invitational.  Following the first weekend of action, freshman Brittany Duncan was named the Horizon League Player of the Week (her first career honor), while senior Alex Lagesse earned HL Pitcher of the Week accolades, her sixth career award, fifth-most in league history.  Rutkowski earned her first award of the season after the Frost Classic.

A Spectacular Weekend: Jordan Rutkowski repeated as the Horizon League Player of the Week after another spectacular weekend at the plate, hitting .714 over the Crusaders’ four games at the UTEP Invitational.  She went 10-for-14 at the plate with seven runs scored and nine RBIs on the weekend.  The senior catcher hit for power as well, tallying four doubles and three RBIs to slug at a 1.643 clip for the tournament.  Rutkowski then extended her hitting and run-scoring streaks to eight games apiece on Tuesday at New Mexico State.

Digging the Long Ball: In the midst of her outstanding weekend, Rutkowski also ascended to the top of the Crusader career chart in home runs.  The senior, who entered the season with 18 career home runs, four off the record, tied the mark previously shared by Sadie Conner and Ashley Wolter with her round-tripper against Iowa State.  Rutkowski then broke the record with her first of two home runs in the win over UTSA.

Previous Weekend Was Good, Too: Rutkowski also had a monster weekend at the plate at the Frost Classic, helping Valpo to a 4-1 record.  The senior earned Player of the Week honors after hitting .533 (8-of-15) over the five games and slugged at an impressive 1.267 clip, picking up two doubles and three home runs.  In Valpo’s win over UT-Martin, Rutkowski went 2-for-3 with a home run, two runs scored and three RBIs, and followed in a run-rule victory over Niagara by hitting her second career grand slam as part of a career-high six-RBI game, going 2-for-3 with a pair of round trippers.

Marinec Makes Up Ground: Redshirt sophomore Jessie Marinec was hitting just .056 through the Crusaders’ first two weekends of play, but has enjoyed a surge over the last five contests.  The middle infielder has gone 11-for-18 (.611) over Valpo’s last five games while scoring eight runs.  She tallied three hits apiece in wins over UTSA and New Mexico State and scored a pair of runs in four separate games.

Walk This Way: Senior Sara Strickland has been solid at the plate over the last five games, going 6-for-13 (.462) with seven runs scored, but what might be most impressive is her eye at the plate.  Strickland has drawn six walks over the last five games without striking out, extending the career walks record she set earlier this season to 79.  In fact, on the season, Strickland has walked 10 times while striking out just once and has an on-base percentage of .442 despite a batting average of just .300.

Returning to the Order: Redshirt junior Joylyn Ichiyama-Drewry sat out last season and got off to a slow start this year, going hitless in her first seven at-bats of 2012.  Since then, however, the Crusader third baseman has been on a tear, going 16-for-34 (.471) over Valpo’s last 11 games, scoring eight runs and driving in ten runs over that span.

Up and Down the Lineup: Almost everywhere you look at the Crusader batting order over the last five games, you find offensive production.  Eight of Valpo’s nine regulars are hitting at least .313 over that stretch, with seven of the nine slugging at least .500.  The Crusaders have also spread out the run-scoring, as ten different players have scored at least three runs each over the last five games.