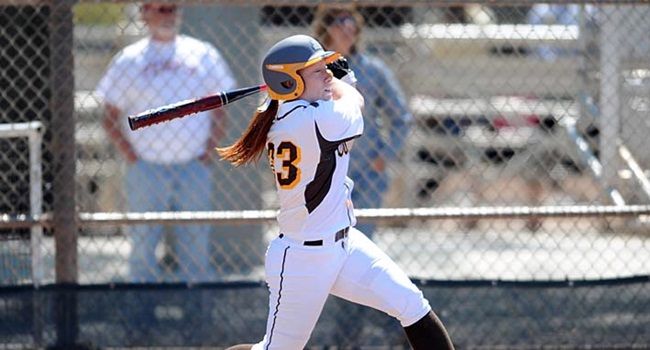 Valparaiso split a Horizon League doubleheader Saturday afternoon in Cleveland, Ohio, taking game one from host Cleveland State 3-2 before falling in the nightcap to the Vikings, 4-1.  The win marked the 100th in head coach Jordan Stevens' tenure with the Crusaders.

“We played well enough to get two wins today, but just couldn’t push across enough runs in the second game,” said Stevens.  “Taylor gave us a very nice outing in the opener and bounced back well from a big hit in the sixth.  Our offense came up with just enough quality at-bats to win.”

Crusader starting pitcher Taylor Weissenhofer (Homer Glen, Ill./Lockport Township) allowed no hits through the first five innings of play, with only one runner over that stretch making it past first base.  CSU drew a leadoff walk in the third, with the runner moving to third base on a pair of groundouts, but Weissenhofer induced another groundout to keep the Vikings off the board.

Meanwhile, Valpo pushed across a combined three runs over the third and fourth innings to take the lead.  Junior Angie Doerffler (Fort Wayne, Ind./Concordia Lutheran) led off the top of the third with a walk, and after a fielder’s choice erased the lead runner, freshman Katelyn Ranieri (Schererville, Ind./Lake Central) picked up an infield single to put two runners on.  Two batters later, fifth-year senior Joylyn Ichiyama (Torrance, Calif./Redondo Union) drilled a double into left field, scoring both Ranieri and Amanda Wisniewski (Skokie, Ill./Huntley) to give Valpo a 2-0 lead.

The Crusaders added what proved to be a key insurance tally in the fourth, as with one out, senior Tori Brown (Harrison, Ohio/Harrison) connected on a solo homer to straightaway center field to make it 3-0 Valpo.  It looked like another insurance run would cross the plate in the sixth after a leadoff triple by junior Amanda Korb (Indianapolis, Ind./Lutheran), but she was cut down at home attempting to score on a pitch to the backstop.

Cleveland State sliced two runs off the lead immediately in the bottom of the sixth, with a leadoff single from Darien Ward followed by a two-run homer by Dara Toman.  After a groundout, the Vikings picked up back-to-back singles, but Weissenhofer got a key strikeout before another groundout ended the inning.  The rookie had no trouble in the circle closing out the game in the seventh, striking out the first two batters of the frame before inducing an easy pop-up to end the opener.

Weissenhofer improved to 13-10 on the year with the complete-game win, giving up just four hits while striking out six.  Alex Radjen took the loss to fall to 4-6 for CSU after giving up all three Crusader runs in 3.1 innings of work.  Korb and Ranieri each had two-hit games in the opener as Valpo tallied eight total hits, while Doerffler and Ichiyama both reached base twice as well.

The deciding blow in the nightcap would come early on, as after a pair of infield singles and a walk loaded the bases for the Vikings in the bottom of the first with none out, Cynthia Woodard hit a grand slam to left field to quickly make it 4-0 Cleveland State.  The Crusaders had a solid chance to cut into the lead in the sixth after a leadoff walk by Wisniewski, which was her 30th of the year, matching Valpo’s single-season record, followed by a Ranieri single and a Viking error to load the bases with nobody out.

After the Vikings forced Valpo’s lead runner at the plate on an infield grounder for the first out, redshirt junior Jessie Marinec (Alsip, Ill./Marist) sent what looked like it would be an RBI single into shallow right field.  But the Crusader runners had to hold up in case the ball was caught, and after the right fielder trapped the ball, the Vikings got the ball in for a force at second base.  Instead of the bases still loaded with one out, there were just runners on the corners with two away, and a strikeout ended the threat.  Valpo loaded the bases with two outs in the seventh on a single and a pair of CSU errors, but a grounder back to the circle closed out the game.

Freshman Sierra Pico (North Las Vegas, Nev./Legacy) took the loss for the Crusaders, falling to 8-8 on the year, despite surrendering no runs and just three hits following the early grand slam.  Susan Knight improved to 12-9 with the complete-game win for Cleveland State (18-22, 9-7 Horizon).  No Crusader had more than one hit in the nightcap.

“I was pleased with a majority of our swings in game two, but we just hit them right at fielders or they made nice plays,” said Stevens.  “Sierra bounced back nicely after the first inning and gave us a chance, but we have to play with some urgency to come back from down four runs, and we really didn’t do that until the end.  We need that urgency to surface tomorrow.”

Valparaiso (24-22, 9-8 Horizon) looks for the series win on Sunday at 11 a.m. CT, with live stats and live video available through ValpoAthletics.com.