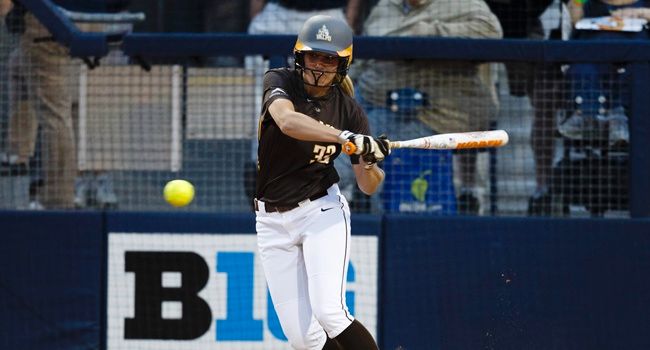 The Valparaiso softball team dropped a pair of one-run games to open the Ragin’ Cajun Invitational on Friday in Lafayette, La., falling victim to a walk-off homer in a 4-3 loss to Central Arkansas and seeing its rally come up one run short in a 3-2 loss against host #20/20 Louisiana.

The Crusaders opened the tournament against Central Arkansas, falling behind 1-0 on an unearned run in the third inning on an RBI double from Briana Whisenhunt.  Valpo would claim the lead with a three-run fifth frame, however.  Four consecutive singles, including RBI base knocks from freshman Jorgi Calombaris (Frankfort, Ill./Lincoln-Way East), senior Angie Doerffler (Fort Wayne, Ind./Concordia Lutheran) and sophomore Kaitlyn Ranieri (Schererville, Ind./Lake Central), plated the three runs for the Crusaders.  Valpo actually had the bases loaded with one out looking for more, but a pair of strikeouts ended any additional threat.

The Crusaders went down in order in each of their final two times at bat, while Central Arkansas cut Valpo’s lead to 3-2 with back-to-back doubles to lead off the sixth inning.  The Bears then scored twice in the seventh, leading off the inning with a walk.  Sophomore Sierra Pico (Las Vegas, Nev./Legacy) induced a pair of groundouts, which advanced the runner to third, to move within one out of the victory, but Sarah Bigej connected on a two-run walk-off home run to send the Crusaders to the loss.

Pico went the distance in the circle for Valpo, falling to 0-2 on the season.  Kylee Studioso improved to 1-2 for Central Arkansas (2-5) with 2.2 innings of hitless relief.  Sophomore Janelle Bouchard (Kennebunk, Maine/Kennebunk) and freshman Taylor Lawson (Tucson, Ariz./Sahuaro) each had two of the Crusaders’ eight base hits.

“We have to have consistent approaches at the plate from everybody for an entire game, not just two or three innings,” said Crusader head coach Jordan Stevens on the opener.  “Even with that, we had an opportunity to close the game out and weren’t able to get it done.”

In the nightcap against the 20th-ranked team in the nation, sophomore Mollie Lindeman (Hebron, Ind./Hebron [PNC]) stepped into the circle and limited the Ragin’ Cajuns, who advanced to the NCAA Super Regionals last season, to their lowest run total of the season.  In the second inning, Lindeman walked the bases loaded with one out, but escaped with no damage by inducing a strikeout and a flyout to end the frame.

Haley Hayden connected on a two-run homer in the third, while Corin Voinche delivered a one-out solo round-tripper in the fourth for the Ragin’ Cajuns only runs.  Lindeman stranded two runners on base in each of those two frames to keep the deficit at a manageable three runs.  The Crusaders then moved within 3-2 in the sixth, as senior Kimberlin Wallace (Newton, Ill./Community [Lake Land C.C.]) led off with a double and Calombaris followed with her first career home run.  But Valpo’s final six batters would go down in order.

Wallace picked up a pair of base hits as the Crusaders were limited to just four hits by Christina Hamilton, who improved to 2-0 in the circle for Louisiana (4-2-1).  Lindeman took the loss in the complete-game effort for Valpo despite striking out five batters.

“We played well against a very good Louisiana team, but we still need some more consistency in our approach,” said Stevens on the nightcap.  “We got a solid performance in the circle, but have to cut down on walks and need to be able to bounce back better after big hits.  It was a tough loss for us – we did compete well, but we can’t be happy with just competing.”

Valparaiso (2-4) looks to get back on the winning track on Saturday with two more games.  The Crusaders will rematch against Central Arkansas at 9 a.m. and then take an extended break before closing out the day versus Boston College at 7 p.m.  Live stats for both games will be available through ValpoAthletics.com.