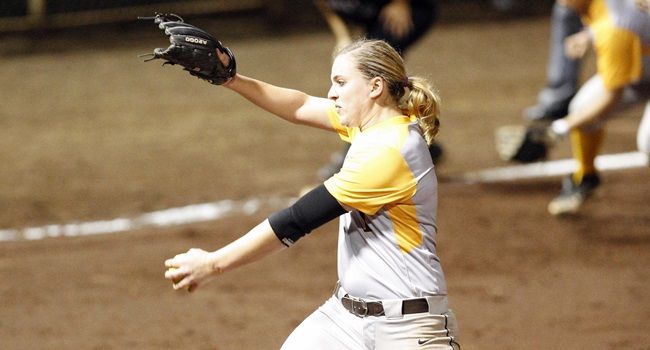 Facing the nation’s second-ranked team for the second time in program history, Valparaiso struck for a run in the bottom of the first inning, but couldn’t push anybody else across the plate, falling to #2/4 Oregon 5-1 Thursday evening at the Rainbow Wahine Classic in Honolulu, Hawaii.

“We came out great in today’s game offensively - swung aggressively and took good swings in the first inning,” said Crusader head coach Jordan Stevens.  “But then we went the next three innings and weren’t doing that.  We got back to an aggressive approach at the plate, but it was too late.  Our pitching was better than yesterday as well, but we still have work to do.”

Oregon struck for three runs in the top of the first inning, including a pair of runs with two outs, but the Crusaders responded in their half of the first.  Fifth-year senior Jessie Marinec (Alsip, Ill./Marist) led off with a single, and two batters later, sophomore Kaitlyn Ranieri (Schererville, Ind./Lake Central) singled Marinec over to third, moving up to second on the throw to put two in scoring position.

Junior Tarah McShane (Streamwood, Ill./St. Edward Central Catholic) worked a full count before sending a single into left field, plating Marinec to cut the deficit to 3-1 and putting runners on the corners with still just one away.  But Ranieri was cut down at the plate trying to score on an infield grounder, and another groundout limited the Crusaders to just one run in their half of the first.

Valpo was unable to get an offensive threat going over the final six innings, with a two-out walk by senior Angie Doerffler (Fort Wayne, Ind./Concordia Lutheran) in the fifth serving as the only Crusader baserunner during that stretch.  Oregon added a run on a sacrifice fly in the third and on a double-play ball in the fifth to complete the scoring.

Valparaiso (4-17) continues play at the Rainbow Wahine Classic on Friday with a pair of games.  The Crusaders will take on BYU in the first of four games on the day, with first pitch of that game coming at 6:30 p.m. CT (1:30 p.m. HST).  Valpo will then take on an opponent to be determined to kick off bracket play in the day’s final game, slated for a 1 a.m. CT (8 p.m. HST) first pitch pending the length of prior games.  With a win in the opening game of bracket play, the Crusaders would advance to play on Saturday.  Live stats for both games tomorrow will be available at ValpoAthletics.com.