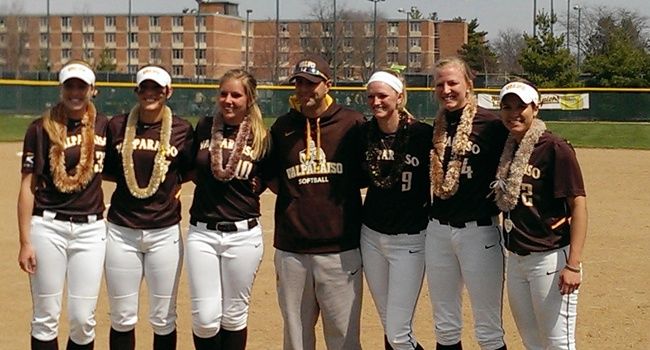 On a Senior Day where runs were at a premium at the Valparaiso University Softball Field, Valparaiso earned a 2-1 win in the first game of the doubleheader against Oakland before falling in extra innings for the first time this season, losing the nightcap 4-2 in eight innings.

"We just weren't able to get anything going offensively today," said Crusader head coach Jordan Stevens.  "I thought Oakland's pitcher did a very nice job against us - give her credit for coming back in game two and continuing to do the same thing.  We were never able to get to her.  In the end, even though we would have liked to get the sweep, it's a series win and we held serve at home."

It looked like Oakland would score the opener’s first run in the top of the third as Erika Polidori sent a shot over the left-field fence, but a lineup card error negated the home run and resulted in an out.  The Crusaders then cracked the scoreboard themselves in the bottom of the third.  Senior Angie Doerffler (Fort Wayne, Ind./Concordia Lutheran) blooped a ball over the pitcher’s head for an infield single, and two batters later, sophomore Kaitlyn Ranieri (Schererville, Ind./Lake Central) drove a double to left to plate Doerffler and make it 1-0 Crusaders.

Valpo got a key insurance run off the bat of freshman Sam Stewart (Frankfort, Ill./Lincoln-Way East) in the bottom of the fifth, as the rookie launched her second home run in as many days to straightaway center field.  Oakland pulled that run back in the top of the sixth, as Jackie Kisman led off the inning with a single and moved up 60 feet at a time, eventually scoring on a single by Shannon Cleveland.

Clinging to a one-run lead, a leadoff single by the Golden Grizzlies in the seventh prompted a move to sophomore Taylor Weissenhofer (Orland Park, Ill./Lockport Township) out of the bullpen.  Weissenhofer gave up a single to her first hitter, but proceeded to register back-to-back outs before a full-count walk loaded the bases with two away.  But the sophomore froze Morgan Muron with a 1-2 pitch on the black to close out the Valpo win.

Weissenhofer picked up her first save of the season, while fellow sophomore Sierra Pico (Las Vegas, Nev./Legacy) improved to 4-11 with the win, scattering five hits in six-plus innings of work.  Erin Kownacki took the complete-game loss for Oakland.

The Golden Grizzlies struck first in the nightcap, scoring two runs in the top of the third on a two-out double by Courtnee Johnson.  A bizarre play helped Valpo tie the game in the fourth, as after a leadoff single by Ranieri, freshman Jorgi Calombaris (Frankfort, Ill./Lincoln-Way East) blooped a ball in the air in front of home plate.  Polidori, the Oakland catcher, ran into Calombaris while the latter was still in the batter’s box, and her diving effort came up short.  However, Ranieri had to hold at first in case the ball had been caught, and Kownacki picked up the ball from the circle with plenty of time to throw to second for the force.

But Kownacki’s throw was off line and rolled all the way to the warning track, allowing Ranieri to score and Calombaris to roll into third base on a ball hit about 25 feet.  Two batters later, junior Tarah McShane (Streamwood, Ill./St. Edward Central Catholic) lifted a sacrifice fly into medium-deep left field, easily enough to score Calombaris and make it a 2-2 ballgame.

A two-out double from freshman Taylor Lawson (Tucson, Ariz./Sahuaro) would be the only other hit for the Crusaders in the final three innings, while Oakland put two on with two outs in the sixth and couldn’t score.  The Golden Grizzlies looked poised to score in the top of the seventh with back-to-back infield singles to lead off the inning, but a fly ball turned into a double play as the Crusaders cut down the trail runner trying to tag up and advance.  Weissenhofer then entered in her second relief appearance of the day and induced a soft line-out on the infield to keep Oakland at two runs.

The Golden Grizzlies made sure they would leave Valpo not having been swept in the first extra inning, however, as with a runner on second and two outs, Brittany Prior connected on a first-pitch homer to left to make it 4-2 Oakland.  Ranieri singled with two outs in the bottom of the eighth to bring the potential tying run to bat for the Crusaders, but a liner back to the circle closed out the series finale.

Weissenhofer took the loss for Valpo in the relief appearance, falling to 11-7, while sophomore Mollie Lindeman (Hebron, Ind./Hebron [PNC]) went 6.2 strong innings, scattering seven hits and picking up four strikeouts.  Kownacki went the distance for the second straight game, earning her second three-hitter of the day to improve to 5-10 on the year for Oakland (12-17, 1-4 Horizon).  Ranieri ended the day 3-for-7 at the plate after a two-hit performance in the nightcap.

"I thought both our starters did a very nice job today," said Stevens.  "Both Sierra and Mollie had good command and mixed up their pitches very well.  They both definitely gave us opportunities to win the games, and that's what you ask out of your starting pitchers."

Valparaiso (17-25, 9-4 Horizon) maintains its place atop the Horizon League standings with the series win over the Golden Grizzlies, and now hits the road this week, starting off with a pair of non-league dates.  First up is a doubleheader at Western Illinois on Tuesday, with first pitch slated for 3 p.m.  Live stats will be available through ValpoAthletics.com.