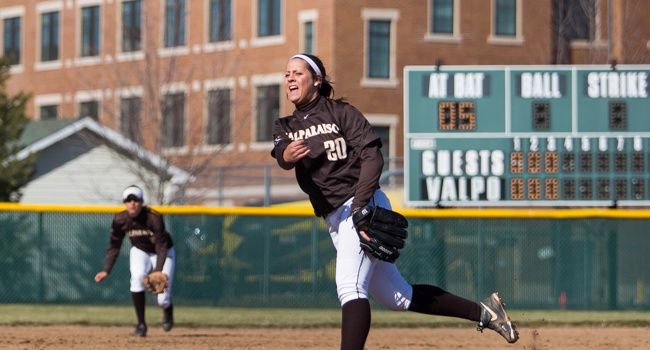 The Valparaiso softball team closed out the non-league portion of its regular season Wednesday at Indiana, falling to the Hoosiers in the resumption of a suspended game, 5-0, before dropping an 8-0 decision in the nightcap.

The Crusaders and Hoosiers started the day by resuming a contest which was suspended back on March 1 in Tucson, Ariz., a game in which Indiana had scored five runs in the top of the second inning.  The game picked up in the top of the fifth on Wednesday, but Valpo was unable to get anything going offensively, going down in order in each of its three turns at bat.

Sophomore Mollie Lindeman (Hebron, Ind./Hebron [PNC]) took the loss for the Crusaders, as she went the distance in the circle, falling to 2-6 on the year.  Lindeman threw 2.1 innings of hitless softball from the point the game resumed on Wednesday.  Lora Olson earned the win for Indiana.

Following the completion of the suspended game, the teams played another full game.  Valpo had the first scoring threat of the game, loading the bases with one out in the top of the second on back-to-back singles from fifth-year senior Jessie Marinec (Alsip, Ill./Marist) and senior Amanda Korb (Indianapolis, Ind./Lutheran), followed by senior Angie Doerffler (Fort Wayne, Ind./Concordia Lutheran) getting hit by a pitch.  But a strikeout and a groundout would end the threat.

Indiana broke the game open with five runs in the bottom of the second, a frame which was interrupted by a brief rain delay and saw the Hoosiers hit two home runs.  The Crusaders put multiple runners aboard in each of the next two innings, but IU turned double plays to keep Valpo off the scoreboard, and the Hoosiers added a single run in the fourth and two runs in the fifth to close out the game.

Sophomore Taylor Weissenhofer (Orland Park, Ill./Lockport Township) took the loss as she started for Valpo, falling to 13-10 after throwing the first 1.1 innings.  Olson improved to 8-15 as she threw the first four innings for Indiana (17-35-1).  Doerffler reached base twice in the nightcap, getting a base hit in addition to getting hit by a pitch.

Valparaiso (20-30) closes out Horizon League play this weekend at Green Bay, heading into the three-game series as one of five teams which can still claim the league title and earn hosting rights for the league tournament.  The series starts with a doubleheader at 1 p.m. on Saturday, with live stats available through ValpoAthletics.com.