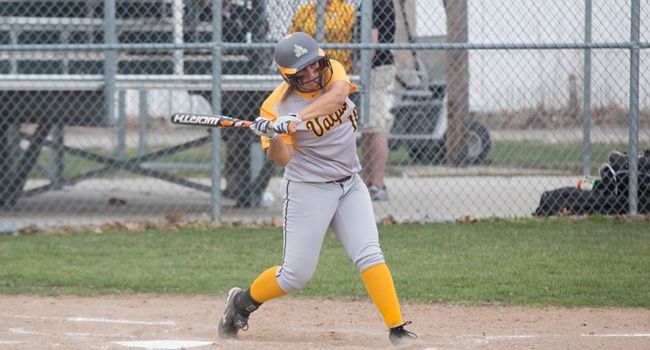 The Valparaiso softball team split for the third straight day Sunday to close out its time in the Rebel Spring Games in Kissimmee, Fla., falling to South Dakota 9-1 before taking down Saint Peter’s by a 10-5 final.  The games were the last on Valpo’s spring break trip, and the Crusaders now return home this week.  The original home opener for Wednesday against Eastern Illinois has been canceled, meaning that Valpo will open the home slate and Horizon League play simultaneously Friday afternoon versus Green Bay.

The Crusaders were unable to gain traction in the opener against South Dakota, falling behind 2-0 after two innings.  An RBI double from freshman Taylor Nadler (New Haven, Mo./St. Francis Borgia) plated fellow rookie Stephanie Moreno (Murrieta, Calif./Murrieta Valley) in the top of the third to cut the deficit in half, but that would be all Valpo could muster offensively, as South Dakota scored two runs in the bottom half of the inning and added five more in the fifth to close out the run-rule decision.

The finale against Saint Peter’s got off to a rough start as well, as the Peacocks hit the board in their first turn at-bat thanks to a three-run homer by Samantha Storms.  But Valpo bounced right back, as sophomore Sam Stewart (Frankfort, Ill./Lincoln-Way East) delivered a three-run homer of her own in the bottom half of the frame to even things up at 3-3.

Stewart added an RBI infield single in the third to put the Crusaders on top, and Valpo extended the lead with two runs apiece in the fourth and fifth innings.  Senior Tarah McShane (Streamwood, Ill./St. Edward) drove in a pair in the fourth with a two-run double, while Moreno and senior Lindsey Norway (Chicago, Ill./Chicago Christian) connected on RBI base hits in the fifth.  Saint Peter’s cut the Valpo lead to 8-5 with two runs in the top of the sixth, but the Crusaders responded with two of their own in the bottom of the sixth for the final margin.

Freshman Ashlyn Montgomery (Lebanon, Ind./Lebanon) improved to 3-2 as she earned the win, surrendering just the three first-inning runs in five innings of work.  Junior Mollie Lindeman (Hebron, Ind./Hebron [PNC]) picked up her first save of the year as she registered the final five outs.  Stewart, Norway, Moreno, McShane and freshman Jasmine Ramirez (Litchfield Park, Ariz./Millennium) all had multi-hit games in the win.

Valparaiso (6-14) opens league play Friday with a single game at 3 p.m. at home against Green Bay.