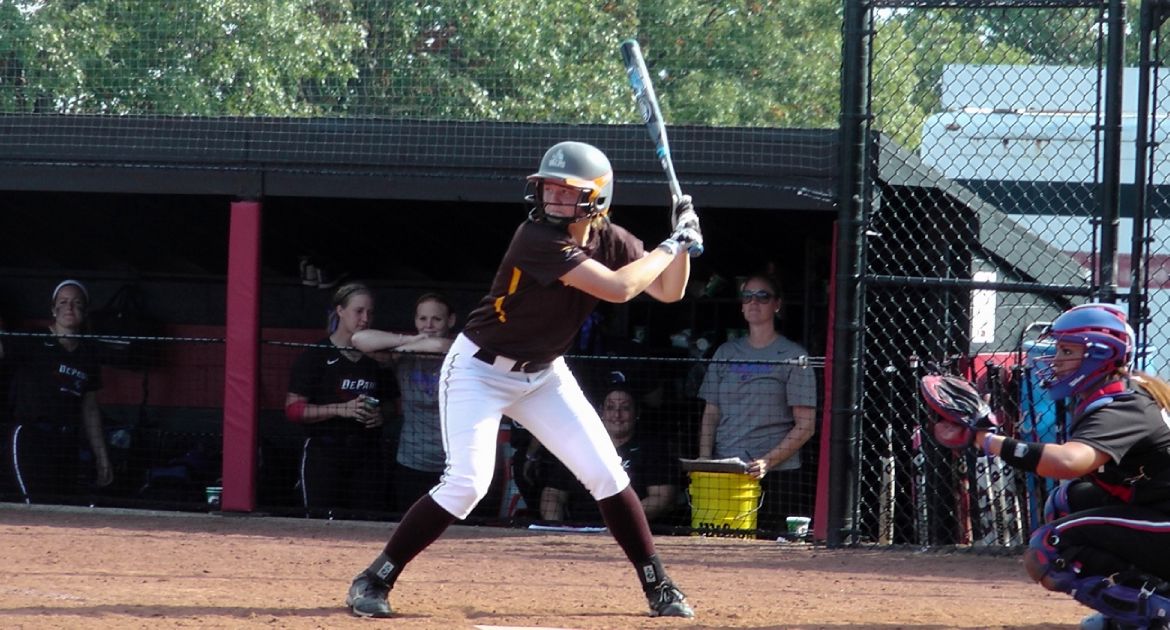 There were players making key plays and coming up with key hits up and down the roster of the Valparaiso University softball team on Saturday afternoon in Cleveland, Ohio, as the Crusaders swept Cleveland State in a Horizon League doubleheader by scores of 7-4 and 7-6, the latter win coming in 10 innings.

“We try to work on being consistent because as I’ve told the players, it’s not like basketball or football where you can just give the ball to a playmaker - you make a lineup and that lineup has to bat throughout the game,” said Crusader head coach Kate Stake.  “We value consistency, because no matter whose turn it is in the box, we want to have confidence that something can happen.  We got that today from our hitters, and I really think that today was the first day that we’ve put together good hitting, pitching and defense in the same day.  All three components helped us win today, and we don’t win both games today unless all three were working.”

Valpo got the scoring going in its first time at-bat Saturday in the opener.  Sophomore Taylor Lawson (Tucson, Ariz./Sahuaro) slapped a chopper off the third baseman’s glove for an infield single with one out.  Two batters later, freshman Taylor Nadler (New Haven, Mo./St. Francis Borgia) pounced on an 0-1 pitch and lined it to the right-center gap to score Lawson.  The throw back in to the infield was misplayed by CSU’s second baseman, allowing Nadler to advance to third, and the ensuing throw by the Vikings’ pitcher sailed over the third baseman’s head as Nadler completed the circuit to make it 2-0 Crusaders.

Junior Taylor Weissenhofer (Orland Park, Ill./Lockport Township) got the start in the circle for Valpo in the opener and was strong early, setting down the Vikings in order in the first and third innings and stranding a runner on third base in the second frame.  CSU would tie the game in the bottom of the fourth, though, as four of the Vikings’ first five batters of the inning singled to knot up the score at 2-2.

After both sides went down in order in the fifth, Valpo reclaimed the lead in the top of the sixth.  Lawson drew a four-pitch walk with one away, and Nadler followed two batters later with a single back through the middle.  Freshman Stephanie Moreno (Murrieta, Calif./Murrieta Valley) then knocked a grounder to second base which was mishandled by the Vikings’ second baseman, allowing Lawson to come all the way around and score to give Valpo a 3-2 lead.  But Cleveland State responded in its half of the sixth with a pair of runs, as Cynthia Woodard led off the frame with a solo homer and Mackenzie Joecken delivered a run-scoring double later in the inning to make it 4-3 CSU.

The Crusaders had one final turn at the plate, however, and took full advantage.  Junior Mollie Lindeman (Hebron, Ind./Hebron [PNC]) led off with a full-count walk and senior Lindsey Norway (Chicago, Ill./Chicago Christian) laid down a perfect sacrifice bunt to advance her into scoring position with one out.  Freshman Jenna Stauffenberg (Kankakee, Ill./Bishop McNamara) followed with a sharp single through the right side, putting runners on the corners.

Sophomore Jorgi Calombaris (Frankfort, Ill./Lincoln-Way East) sent a grounder to second, and the Vikings elected to go for the play at home, but the throw was a bit high and Lindeman slid in under the tag to tie the game at 4-4.  Lawson then laid down a bunt as well, and again the Vikings committed a defensive miscue, as the third baseman threw the ball down the right-field line, allowing Stauffenberg to score and make it 5-4 Crusaders.  Junior Kaitlyn Ranieri (Schererville, Ind./Lake Central) delivered a pair of key insurance runs as well, lining a double to the left-center gap to push the lead to 7-4, and Weissenhofer pitched around a one-out single in the seventh to close out the win.

Weissenhofer scattered eight hits in the complete-game victory, striking out four and inducing seven infield pop-outs in the winning effort.  Susan Knight took the loss for CSU, going the distance in falling to 10-7 on the season.  Nadler tallied two of Valpo’s six hits in the opener, while Lawson recorded a hit and a walk and scored three runs.

“I think that Taylor’s performance earlier this week at Northern Illinois gave me confidence going into the weekend,” said Stake.  “Our game plan today was to rely on the vets in the circle to get the job done, and they did that.  Both Taylor and Mollie threw well and kept us in the games, so that in the late innings in both games, we had chances to capitalize offensively and win.  Our outfield played great behind them as well – a lot of fly balls and they handled them very well.”

For the second straight game, Valpo took the lead in the top of the first inning as the nightcap began.  Calombaris led off the game with a shot to center for a leadoff double.  Three batters later, Nadler lined a bullet to right field that just eluded the reach of CSU’s right fielder and went to the wall for a run-scoring triple, as Calombaris scored standing up.

The Vikings claimed the lead in the bottom of the second on a two-run homer by Joecken, but Valpo tied things up in the fourth when Nadler drilled a full-count pitch over the right-field wall – her first career home run.  The round-tripper completed Nadler’s cycle for the day and tied the score at 2-2.  But the lead wouldn’t last, as first Erica McNew and then Joecken connected on solo homers for the Vikings in the bottom half of the fourth.

“Taylor did a great job today,” said Stake on Taylor Nadler.  “Today was the first time she’s hit in the four-spot in the order, and she performed like a cleanup hitter should.  She’s been hitting the ball really well, and it really was only a matter of time until one of them got over the fence.  She’s been one of our most consistent batters and she’s doing a great job defensively in the outfield as well.”

Again though, Valpo would put together a late-game rally.  It started innocuously enough, as Ranieri led off the sixth with a single before back-to-back outs.  Senior Tarah McShane (Streamwood, Ill./St. Edward) dropped a single into shallow center to keep the inning alive, and Norway followed with a pinch-hit double to the wall in left, scoring Ranieri to cut the deficit to 4-3.  But the big blow was still to come, as sophomore Sam Stewart (Frankfort, Ill./Lincoln-Way East) stepped up as a pinch-hitter – just her third at-bat in the last 15 games – and delivered in a huge way, connecting on a 2-2 pitch and sending it over the fence in right-center field for a three-run homer to give Valpo a 6-4 lead.

“The pinch-hitting today was a key contribution to our wins,” said Stake.  “Lindsey has been one of our best bunters, and I think her sacrifice in the first game gave us the chance to score the number of runs we did in that seventh inning.  Her double in the second game was big as well, but I don’t think it was any bigger than the bunt – I’m impressed by her poise.  I know she would have loved to start both games, but the fact she kept her head in the game and made the best of her opportunities shows what kind of player she is.  Sam obviously did exactly what we needed her to do, which is hit the ball hard – she got a hold of all of it.  It’s great when you can rely on the bench to be focused and disciplined enough throughout the game that when they get their opportunity, they produce.”

Weissenhofer entered in relief entering the bottom of the sixth and despite CSU loading the bases on three hits – two of which were infield singles – kept the Vikings off the board with a flyout to center.  But in the bottom of the seventh, the Vikings struck, as Susan Knight walked with one out and Woodard followed with a two-run homer to left to tie the game at 6-6.  CSU’s next two batters reached on a single and a walk, but after advancing both into scoring position on a flyout, a grounder to second closed out the frame and forced extra innings.

Each of the next three half-innings saw the teams put one runner on via a single, but nothing more was brewing for either side.  The Vikings threatened against Lindeman, who had re-entered in the circle, in the bottom of the ninth.  CSU had runners on first and second with one out when Joecken singled up the middle.  The Vikings sent McNew, who started the play on second, towards home, but the throw from Lawson in center was a rope to the plate, easily enough for Stauffenberg to apply the tag on McNew for the second out of the inning.  A foul-out down the right field line sent the game into the tenth inning.

“Taylor had that same play against NIU, when the situation wasn’t as dire, and threw out the runner at the plate as well,” said Stake.  “We came in before the top of the tenth inning and I told the team, this time we’re going to make that a game-winning play by Taylor.  We don’t win that second game unless she is able to make that throw.”

The Crusaders would come up with one more combination of big hits in the tenth to secure the victory.  Ranieri led off by getting hit by a pitch, and Nadler followed with her fifth hit of the day, a single through the left side.  Ranieri was thrown out attempting to go first-to-third on Nadler’s hit, but a heads-up play by the freshman advancing to second on the throw proved to be huge.  Nadler advanced within 60 feet of home plate on a wild pitch, and Moreno sent a 2-2 pitch through the left side of the drawn-in infield for the go-ahead RBI.  Lindeman set down the side in order with three groundouts in the bottom of the inning to close out the sweep of the twinbill.

Lindeman pitched eight innings in all, going the first five innings in the starting assignment and re-entering for the final three frames, to earn the win and improve to 4-11 on the year.  Joecken took the loss in relief for Cleveland State (20-18, 5-7 Horizon), pitching the final 4.1 innings.  Valpo banged out 13 hits in the nightcap, matching its second-highest output of the season.  McShane and Nadler led the way with three hits apiece, while Calombaris added a pair of base knocks as well.

Valpo (11-30, 5-9 Horizon) has a week off before it returns to action, as the Crusaders head to Detroit for a three-game league series next weekend.  The series opens with a doubleheader next Saturday, April 25 at 11 a.m. CT, with live stats available for all three games through ValpoAthletics.com.