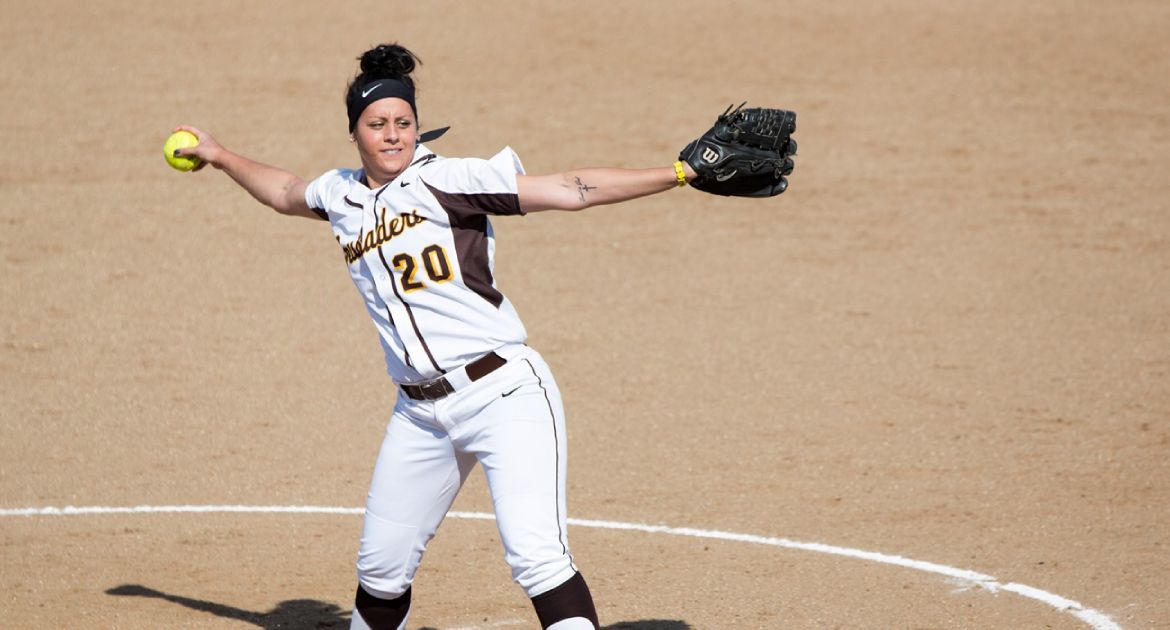 Mollie Lindeman went the distance in the circle for Valpo.
Valparaiso at Wright State | May 06, 2015

The Valparaiso University softball team exploded for a six-run second inning in its first game at the 2015 Horizon League Championship Wednesday afternoon in Rochester, Mich., a lead which was more than enough for hurler Mollie Lindeman (Hebron, Ind./Hebron [PNC]) to uphold as Valpo went on to a 7-1 victory over Wright State. With the win, the fifth-seeded Crusaders advance to take on second-seeded UIC Thursday afternoon at 1:30 p.m. CT.

“I think that our series against Youngstown State had an atmosphere like the tournament, so we knew what to expect coming into today,” said Crusader head coach Kate Stake. “We maintained that same approach today that we had versus Youngstown, which was to go out, have fun and just play.”

After going down in order in the top of the first, the Crusaders surrendered the game’s first run in the bottom half of the frame, as Wright State used three singles to push a tally across the plate. But with the bases loaded and two outs, Lindeman induced a pop-out to sophomore Jorgi Calombaris (Frankfort, Ill./Lincoln-Way East) to keep it just a 1-0 game.

Valpo then busted the game open in the second frame. Freshman Taylor Nadler (New Haven, Mo./St. Francis Borgia) drove a single into center field to lead off the inning, and senior Tarah McShane (Streamwood, Ill./St. Edward) followed with a base knock back through the circle to put the first two on base. Two batters later, senior Lindsey Norway (Chicago, Ill./Chicago Christian), hustling all the way, dropped a run-scoring double into left-center to tie up the game, 1-1.

Junior Sierra Pico (Las Vegas, Nev./Legacy) followed with an RBI single of her own to give Valpo the lead, and then with runners on the corners and one out, freshman Jenna Stauffenberg (Kankakee, Ill./Bishop McNamara) laid down a perfect squeeze bunt and beat it out for a single, plating Norway to make it 3-1. After an out, Calombaris snuck a single through the left side to load the bases. Junior Kaitlyn Ranieri (Schererville, Ind./Lake Central) came up and just watched four pitches go by for balls, drawing the bases-loaded free pass to force home Pico for the fourth run of the inning.

Having batted around in the inning, Nadler stepped back in to the batter’s box and delivered her second base hit of the frame, going the other way for a double to the left-center gap to score both Stauffenberg and Calombaris and push the lead to 6-1. For Nadler, it was the tenth straight time the rookie reached base (7-for-7 with three walks) dating back to the start of last Saturday’s twinbill with Youngstown state, ensuring a place in the NCAA record book in a tie for eighth place for most consecutive plate appearances reaching.

“We didn't go out and play comfortable after the six-run inning,” said Stake. “We didn't sit back on that lead - we might not have scored for several innings, but we didn't play content. We kept looking for chances to add to the lead.”

Given a five-run lead to work with, Lindeman went to work in the circle. While she would end up giving up nine hits, the junior only walked one batter and didn’t surrender an extra-base hit in the complete-game effort. She got help from her defense in the second inning, when with runners on first and second and two out, Ranieri made a sliding catch in right field to end the frame. Then, in the third inning, Nadler made a pair of nice grabs in left field to help keep WSU at just one run.

Valpo had chances to add to its lead in the third and fourth innings, leaving two and three runners on base, respectively, but pushed another insurance run across the plate in the sixth. Ranieri led off with a four-pitch walk, the 98th free pass of her career to tie her for Valpo’s all-time record in the category with a full season to play. After moving up 60 feet apiece on a pair of outs, Ranieri crossed the plate as pinch-hitter Sam Stewart (Frankfort, Ill./Lincoln-Way East) grounded a ball down the third-base line which eluded the third baseman’s backhand for an RBI single.

Wright State put two runners on base with one out in the sixth inning, but Lindeman would keep the Raiders at bay, inducing a foul out behind the plate and a grounder to third to end the threat. Lindeman then closed out strong with a 1-2-3 seventh inning, fittingly assisting on the final out herself on a grounder back to the circle. She improved to 8-11 with the victory, while Wright State (19-32) starter Montana Wear took the loss, surrendering six runs in 1.2 innings of work to fall to 12-21 on the year.

“Mollie found her rhythm early today, and was able to settle into that rhythm,” said Stake. “She just approached every at-bat independent of the last – no matter if the last batter got a hit or struck out, Mollie went after that next batter with the same approach.”

The Crusaders matched their season-high output offensively with 14 hits on Wednesday, and it was a team effort, as seven of nine starters tallied at least one hit, six of those finishing with two-hit games. Ranieri went just 1-for-2, but had her pair of walks as well to reach base a team-high three times. Seven different Crusaders crossed home plate as well.

“We always talk about moving the line, and that our job at the plate is just to get the next person up to bat,” said Stake. “Particularly in that second inning, we did a good job of that. We can have that kind of approach when everybody is hitting well, like we did today.”

Valpo (16-33) looks to advance again in the winner’s bracket on Thursday as it faces off with UIC. First pitch is scheduled for 1:30 p.m. CT, and the game can be seen live on ESPN3.com. Links for the live video, as well as live stats, will be available at ValpoAthletics.com.