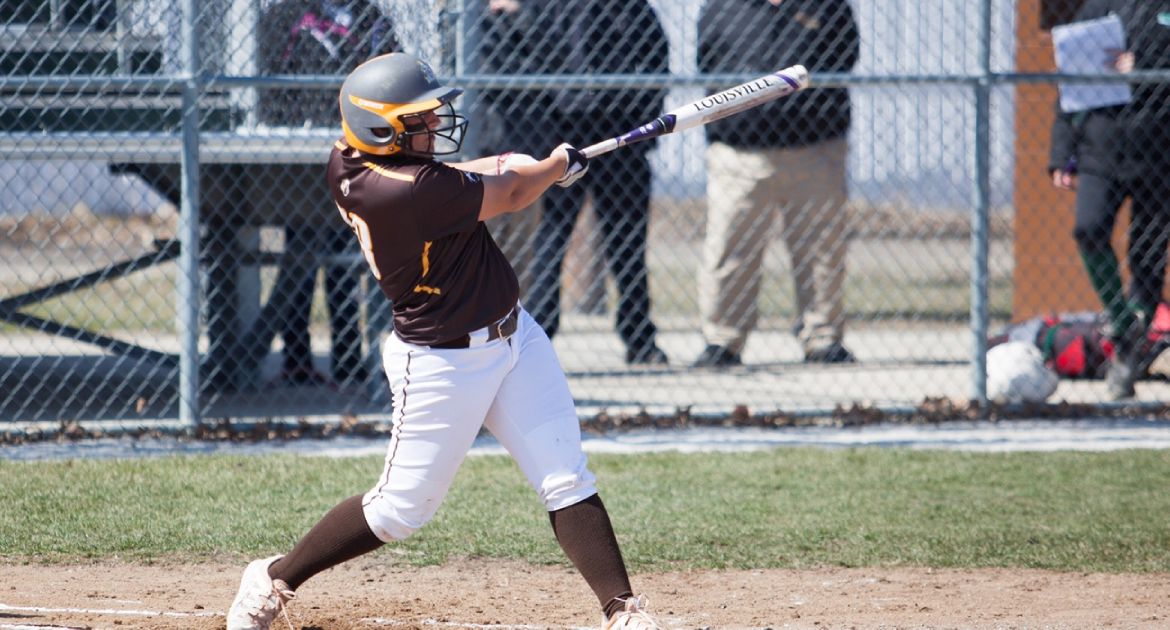 The Valparaiso University softball team saw its 2015 season come to an end Thursday afternoon at the Horizon League Championship in Rochester, Mich. in gut-wrenching fashion. Valpo dropped a pitcher’s duel to open play against UIC, 1-0, before seeing a furious rally in the seventh inning come up just short, falling 4-3 to Wright State in an elimination game.

The opener against the Flames ended up being a matchup of two strong pitching performances from Crusader starter Taylor Weissenhofer (Orland Park, Ill./Lockport Township) and UIC starter Elaine Heflin. In stark contrast to the teams’ set of three regular season games, which saw a combined 49 runs scored, both starting pitchers kept posting matching zeros deep into the contest.

Valpo put at least one runner on base in each of the first six innings, and had runners in scoring position a few different times. In the second, senior Tarah McShane (Streamwood, Ill./St. Edward) walked to lead off the frame and fellow senior Lindsey Norway (Chicago, Ill./Chicago Christian) was hit by a pitch two batters later to put two on with one out. Neither was able to advance any further, however.

The third inning brought perhaps Valpo’s best scoring opportunity, as sophomore Jorgi Calombaris (Frankfort, Ill./Lincoln-Way East) and junior Kaitlyn Ranieri (Schererville, Ind./Lake Central) tallied back-to-back infield singles with one away and moved up sixty feet apiece on a groundout, but a strikeout would strand both in scoring  position. The Crusaders also had a runner on second in one out in the fourth and a runner on second with two outs in the fifth as well, but both were left on second base as Valpo was unable to crack the scoreboard.

Meanwhile, Weissenhofer was dealing in her best performance of the season. The junior struck out seven in her first six innings of work and did not allow a UIC baserunner past first base in that stretch as the game entered the seventh inning scoreless. But the Flames would walk off a winner in the bottom of the seventh, as a leadoff walk ended up coming around to score on a single by Erica Hampton.

“Our pitching performances this weekend were championship level,” said Crusader head coach Kate Stake. “Both Taylor and Mollie threw the best that they’ve thrown all year. Taylor’s performance against UIC was all we could’ve asked from her. It was nice to be in a pitcher’s duel – it’s something we haven’t had enough of this season. I’m proud of both of them for giving everything they had out there this tournament.”

Weissenhofer took the tough-luck loss to fall to 2-12 on the year, despite surrendering just the one run and give hits. Heflin picked up the complete-game win for UIC (24-20) to improve to 12-10. Freshman Stephanie Moreno (Murrieta, Calif./Murrieta Valley) was 2-for-2 with a sacrifice bunt in the opener, while Calombaris reached base three times, including two walks.

With the loss, the Crusaders fell into the loser’s bracket to take on Wright State in an elimination game. From the start, the roles seem flipped from Valpo’s first game of the day, as it was the Crusaders struggling to get runners into scoring position, while WSU had scoring opportunities in most innings. One walk and two singles accounted for the only baserunners Valpo would have through the first six frames.

Wright State struck in the bottom of the first, scoring three runs on three hits and a pair of walks to take a 3-0 lead. But the Valpo defense helped keep the Crusaders within striking distance as the Raiders threatened to expand their lead. First, in the third inning, sophomore Taylor Lawson (Tucson, Ariz./Sahuaro) threw out a runner at the plate who was trying to score from second on a single – the sixth time this season she was on the front end of an 8-2 putout at the plate.

Later in the third, with a runner on second and two outs, freshman Taylor Nadler (New Haven, Mo./St. Francis Borgia) made a nice running, sliding catch in left field to keep it a 3-0 game. Then, in the fifth, after the Raiders had added a run to make it 4-0, the Crusaders alertly doubled up a runner who had left third early on a fly ball. Freshman Jenna Stauffenberg (Kankakee, Ill./Bishop McNamara) erased a leadoff single in the sixth as well, throwing the runner out attempting to steal – her 16th runner caught stealing of the year.

With three outs remaining and trailing 4-0, the Crusaders donned their rally caps and put forth a spirited come-from-behind effort in the seventh inning. The rally started as Nadler lined a single the other way into left-center, and then McShane followed with a single of her own to left to give Valpo its first runner in scoring position of the game. Moreno then watched four straight balls to load the bases and bring the potential tying run to the plate, still with nobody out.

Norway jumped all over the first pitch she saw, grounding a single back up the middle to score Nadler and make it a 4-1 game. Two batters later, Stauffenberg worked a full-count walk with the bases loaded, and then sophomore Sam Stewart (Frankfort, Ill./Lincoln-Way East) pinch-hit and did the same, forcing home the third run of the inning and bringing Valpo within 4-3 with the bases loaded and just one out. But that would be where the Crusaders’ magic would end, as the comeback attempt came up just one run short.

“I’ve known from the onset I have the right kind of players on this team, but it was great to see that reinforced with the way we rallied in the seventh inning,” said Stake. “It’s good to see so many players stepping up to move the line and score runs, and it’s just as good to see the rest of them in the dugout, rocking their rally caps, standing on top of each other and cheering their hearts out for their teammates. That’s what this is about.”

Junior Mollie Lindeman (Hebron, Ind./Hebron [PNC]) took the loss for the Crusaders, giving up three runs in four innings of work to fall to 8-12. Ashley Sharp picked up the win in six-plus innings of work for Wright State (21-32) to improve to 9-11, while Montana Wear entered in the seventh and recorded the final three outs for her second save of the year. McShane finished her collegiate career with a multi-hit game, going 2-for-3 in her final contest.

Individually this year, Ranieri broke the Crusaders’ single-season records for both walks (40) and on-base percentage (.543), matching Valpo’s career record in the former category as well. The junior’s standout campaign led to her cracking numerous other of the Crusaders’ single-season charts as well, including slugging percentage (.764, 2nd), total bases (107, 2nd), batting average (.407, 3rd), home runs (11, 3rd), doubles (15, 5th), runs scored (41, 7th) and RBIs (39, 8th). Meanwhile, Calombaris finished tied for fifth in a single season in triples, while McShane’s fielding percentage of .993 was good for seventh in a season in program history.

The loss also closed the career of a pair of Crusader seniors in McShane and Norway, both of whom contributed to Valpo’s seventh-inning rally in the final game with base hits. McShane closed her career second in Valpo history in fielding percentage (.989) and sixth in career RBIs (94) and doubles (36) while hitting at a .282 clip for her career, including hitting .340 as a senior with 25 runs scored and 35 RBIs. Norway finished with her finest offensive season, hitting .270 during her senior campaign with 19 runs scored, 18 RBIs and 11 doubles, and finished up with 56 career runs scored and 42 RBIs.

“Lindsey and Tarah are both great kids who showed a good deal of improvement over the course of the season,” said Stake. “Both of them came up to bat in that last inning full of emotion, but they either tucked it away or used it to their advantage, because both had outstanding final at-bats of their careers. I’m impressed with their composure and with their leadership. It’s always difficult when players’ careers come to an end, but they finished out their careers over the past couple weeks in a way I think both of them should be proud of – I’m certainly proud of them.”