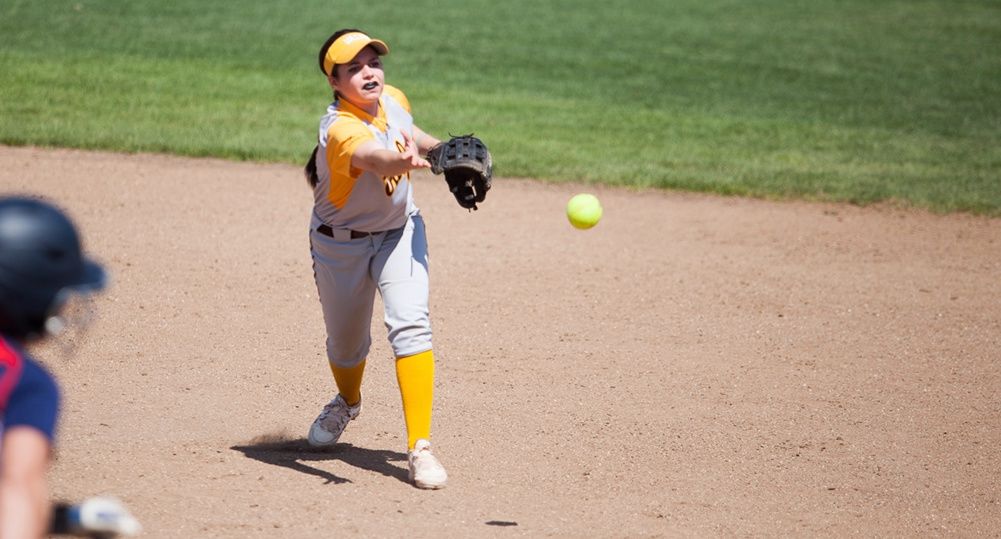 Jorgi Calombaris picked up a base hit and scored the Crusaders' lone run Sunday.
Ball State at Valparaiso | February 28, 2016

The Valparaiso University softball team finished up action at the Hilltopper Spring Fling in Bowling Green, Ky. on Sunday morning, dropping its finale against Ball State, 8-1.

The Crusaders and Cardinals played a pair of scoreless innings before a two-run double from Madison Lee and a two-run homer by Emily Dabkowski put Ball State ahead 4-0 in the middle of the third. Valpo pulled a run back in the bottom of the third, as junior Jorgi Calombaris (Frankfort, Ill./Lincoln-Way East) connected on a one-out single and scored two batters later on a double from sophomore Stephanie Moreno (Murrieta, Calif./Murrieta Valley).

Valpo would put a runner on base in each of the final four innings, but only once was able to advance that runner into scoring position. Ball State closed out the scoring with a single run in the fifth and three unearned tallies in the sixth.

Sophomore Brenna Boyle (St. John, Ind./Andrean) picked up two of the Crusaders’ five base hits on Sunday, while each of the top three batters in the Valpo order finished with one hit apiece. Senior Taylor Weissenhofer (Orland Park, Ill./Lockport Township) took the loss in the start, falling to 0-2, while fellow senior Sierra Pico (Las Vegas, Nev./Legacy) surrendered just one earned run in her 4.1 innings of work and struck out six batters, matching her career best.

Lee picked up three hits to lead Ball State (8-6), while four other Cardinal batters finished with two hits each. Nicole Steinbach picked up the win in relief for the Cardinals to improve to 6-2.

Valparaiso (0-9) continues spring break play at USC Upstate’s Spartan Invitational in Spartanburg, S.C. next weekend. The two-day event for the Crusaders opens with a pair of games on Friday, Mar. 4.