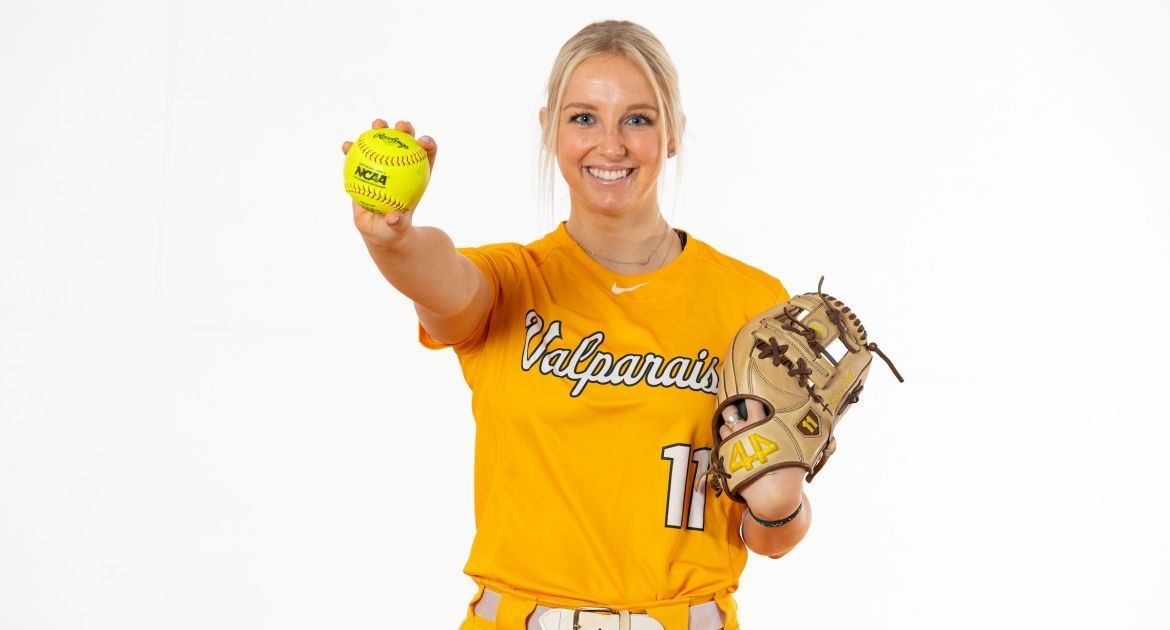 Next Up in Valpo Softball: For the first time in nearly two years, the Valpo softball team will take to its home field this weekend, as the Brown and Gold welcome Indiana State to the Valpo Softball Complex for their three-game MVC series.

Looking Ahead: Valpo returns to the road next weekend as it travels to UNI for its conference series against the Panthers.

Following Valpo Softball: Friday’s doubleheader is scheduled for a radio broadcast on WVUR (95.1 FM, Valparaiso). Links to the live audio, as well as live stats for all three games, will be available at ValpoAthletics.com.

Head Coach Kate Stake: Kate Stake was hired as head coach of the Valparaiso softball program on July 23, 2014 and is in her seventh season as head coach in 2021. Stake, who is 119-172 at Valpo, led Valpo to the 2016 Horizon League Championship and a berth in the NCAA Tournament - the third in program history. Stake arrived at Valpo with eight seasons of assistant coaching experience at the Division I level, most recently serving as an assistant at mid-major power Hofstra. She played her collegiate softball at fellow MVC member Illinois State and is a 2005 graduate of ISU.

Series Notes: Indiana State leads the all-time series between the two programs, 12-5. The advantage is only 4-3 in favor of the Sycamores since Valpo joined the Valley, however, and the Brown and Gold have won three of the last four meetings between the two teams. In the last series between Valpo and Indiana State - a three-game set at Valpo in April 2019 - Valpo took two out of three, winning the first two games 7-6 and 7-5 before dropping the finale 9-1. Peyton Moeder went 7-for-11 with four runs scored over the course of that series.

Scouting the Opposition: Indiana State enters the weekend at 7-16 overall and 1-5 in MVC play, dropping three games to Illinois State and two out of three against UNI so far in conference action. Bella Peterson leads the Sycamore offense, hitting .354 with 15 runs scored and 20 RBIs. In the circle, six different Indiana State pitchers have seen action, with Gabbi Schnaiter tossing a team-high 55.2 innings with a team-best 3.65 ERA.

Addi Goes Yard: Senior Addi Burke has done a lot in the Brown and Gold over her four-year career, but she had never connected on a home run before last weekend. That changed in the Sunday game at Evansville, as playing in her 132nd career game, Burke drove a full-count pitch over the right-field wall in the first inning for her first career round-tripper. That was the highlight of a weekend which saw Burke go 3-for-8 with three walks at the plate and continue her stellar fielding with six putouts and a pair of assists. Burke now owns 78 chances (38 putouts/40 assists) without an error this year, ranks eighth in the MVC in assists and is the only regular 2B/SS/3B in the Valley with a perfect fielding percentage.

AJ Steps Into the Lineup: Freshman Alexis Johnson entered last week with just two at-bats in her rookie season, but given a chance with her first career starting assignment in the second game at Evansville, Johnson took full advantage. Johnson went 2-for-3 with a triple, a walk and a pair of RBIs in her first career start, and the next day found herself in the lineup again, where she went 1-for-3 and scored a run.

Keeping Hitters Off Balance: Freshman Caitlin Kowalski had a pair of strong performances in the series at Evansville, as the Purple Aces hit just .176 off of her in 10 innings of work. In her start in the series opener, Kowalski threw a complete-game two-hitter while striking out seven, not allowing a hit after the first inning. It was Kowalski’s third start of the year in which she surrendered two or fewer hits. She struck out four more batters in four innings of work the next day and currently ranks ninth in the Valley with 49 strikeouts.

A Shutout Win: Valpo bounced back from two losses to Bradley to open MVC play with a 4-0 shutout victory over the Braves in the series finale. Starter Easton Seib went 1.2 innings, stranding the bases loaded in the first, and Caitlin Kowalski pitched the final 5.1 innings in relief, entering with the bases loaded in the second and getting the third out. It was the team’s first shutout since blanking Evansville 5-0 in the opening round of the 2019 MVC Tournament. Valpo’s last shutout in regular season conference play came in May 2018, a 9-0 win at Illinois State.

Tripling Up: Junior Jaina Westphal had a rare doubleheader feat in the Saturday twinbill at Bradley. Entering the doubleheader with just two triples in 75 career games, Westphal connected on a three-bagger in both ends of the twinbill. She now owns three triples this year, tops in the MVC and tied for 19th nationally. Westphal is also just one triple shy of Valpo’s single-season top-10 chart in the category.