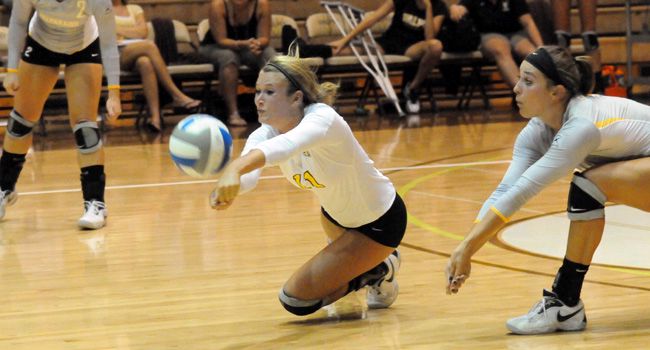 This Week in Crusader Volleyball: Valparaiso makes the short trip east to the University of Notre Dame this weekend to compete at the Golden Dome Invitational.  The Crusaders will face Portland on Friday afternoon and Lipscomb on Saturday afternoon before closing tournament action against the host Irish on Sunday.

Wrapup of Last Week: For the second straight weekend, the Crusaders went 3-1 as they hosted the Marriott Volley Brawl at the ARC.  Valpo swept Murray State Friday morning before falling to Ball State in three Friday night.  The Crusaders then defeated both Texas A&M-Corpus Christi and, after a half-hour delay due to a power outage, Evansville by 3-1 counts on Saturday.

Following the Crusaders: All three of Valpo’s matches at the Golden Dome Invitational will be broadcast live over the airwaves of Valpo’s student radio station, WVUR (95.1 FM), and online at www.valpoathletics.com.  Live video streaming of the Crusaders’  match against Notre Dame will also be available through ND’s website for a fee.  Live stats will be available for all three of Valpo’s tournament matches, as well as a live chat for Sunday’s contest.

Head Coach Carin Avery: Carin Avery enters her tenth season at the helm of the Crusader volleyball program having experienced nothing but success at head coach.  Avery is 227-83 (.732) in her nine years at Valpo and owns a 282-107 (.725) record overall in 11 years as a head coach.  She ranks among the top-20 winningest active coaches in Division I volleyball by winning percentage and is Valpo’s all-time leader in both wins and winning percentage.

Repeat Title?: Valparaiso hopes this weekend for a repeat of the last time the Crusaders made the trip over to Notre Dame.  The opening weekend of the 2008 season saw Valpo participate in the Irish’s Shamrock Invitational, where it defeated Nevada and IPFW to set up a championship match on Sunday against Notre Dame.  The Crusaders took the title showdown, the second win for Valpo under Avery against the Irish.

Defeating the Big East: Valpo will also be looking for its second victory of the season against a Big East squad as well when it takes on Notre Dame, as the Crusaders earned a big five-set road win against West Virginia in the opening weekend.  The win over the Mountaineers means that Valpo has now defeated nine current Big East teams in program history, including all five squads the Crusaders have faced at least three times.

Spreading Out the Wealth: It has been a total team effort to help Valpo start off with a 6-2 record this season, something seen just by taking a look at the match-by-match highs.  Five different Crusaders have already led the way in kills, with just Katie Britton (3x) and Mary Dent (2x) pacing Valpo on multiple occasions.  Six different athletes have already paced the Crusaders in blocks as well.  Even in the digs column, there’s already been two matches where Taylor Root has not had to lead the Crusaders.

Player of the Week: Root also earned Horizon League Defensive Player of the Week honors the first week of the season.  The weekly award was Root’s sixth of her career, tying her for second-most in league history with still nearly two full seasons to play.

Digging Deep: Root was her normal consistent self on the back line at the Marriott Volley Brawl, pacing the tournament field with 5.50 digs/set, highlighted by a 26-dig effort in the win over Evansville.  The junior, who also leads the Horizon League in digs, also made an impact from the service line, tying for tournament-high honors with five aces as well.

Swinging Away: When Groesbeck took a swing for an attack last weekend, odds were good it was hitting the ground for the kill.  The senior picked up 28 kills on just 59 swings while committing just three attack errors, good for a tournament-best .424 hitting percentage.  Groesbeck also contributed on the block, picking up 10 blocks in her 10 sets of action.

Beil on the Block: Freshman Morgan Beil paced the tournament field last weekend at the net, registering 15 blocks over the Crusaders’ four matches.  The highlight was a nine-block effort against Texas A&M-CC, a match in which she also registered nine kills and six digs.  Through her first two weekends of action, Beil is averaging 1.04 blocks/set, second among Horizon League athletes.

Dooms Does It All: Sophomore Sarah Dooms set or matched a number of her career highs in Valpo’s two matches on Saturday.  Dooms set a new best with six assists in the win over Evansville, and tied career bests with 21 digs and three blocks in the victory against Texas A&M-CC.  Along the way, she also registered a pair of double-doubles, tallying 11 kills to go with the 21 digs in the opener before recording 12 kills and 14 digs in the nightcap.

More Career Highs: Dooms wasn’t the only one setting career highs on Saturday.  Sophomore Ellen Vanden Berg picked up a career-best 12 kills (on .550 hitting) in the win over the Islanders prior to 11 kills on .435 hitting that night against Evansville.  Meanwhile, junior Mary Dent also tied her career best for kills in the Crusaders’ tournament finale, leading Valpo with 15 kills.

Record Book Watch: A couple of Crusaders are looking to move up Valpo’s career charts in the 2011 season.  Root now has 1,486 digs following last weekend, moving into fifth all-time in Valpo history.  The junior sits just 51 digs shy of the third spot and just 401 out of second.  Meanwhile, Pokorny now owns 1,996 career assists, eighth all-time.  The senior needs 1,049 assists this season to crack the Crusaders’ top-five in the category.