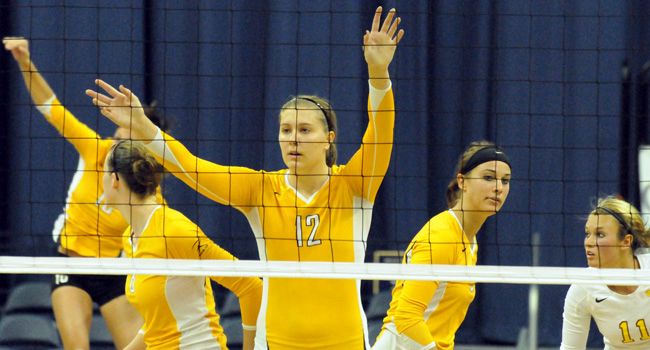 This Week in Crusader Volleyball: Valparaiso gets an early start to Horizon League play with a single mid-week match Wednesday night at home against UIC.  The Crusaders then compete in their final in-season tournament of the season, facing Kansas and San Diego State as well as the hosts of the DePaul Invitational.

Head Coach Carin Avery: Carin Avery enters her tenth season at the helm of the Crusader volleyball program having experienced nothing but success at head coach.  Avery is 228-85 (.728) in her nine years at Valpo and owns a 283-109 (.722) record overall in 11 years as a head coach.  She ranks among the top-20 winningest active coaches in Division I volleyball by winning percentage and is Valpo’s all-time leader in both wins and winning percentage.

Rare Back-to-Back Losses: Valpo’s losses to close the weekend against Lipscomb and Notre Dame were the first back-to-back losses for the Crusader volleyball program since falling to Milwaukee (at the HL Championship) and Western Michigan to close out the 2009 campaign.  It also marked the first time the Crusaders lost a pair of matches at the same tournament since the start of the 2009 season, when Valpo lost to Colorado and UNLV at Florida’s Campus USA Credit Union Invitational.

Block Party: Last year’s Crusader squad was the first since 2006 to average better than two blocks per set, and this year’s team has shown even more improvement on their defense at the net.  Through three weeks of play, Valpo is averaging a Horizon League-best 2.38 blocks/set and has already posted 26 more blocks over its first 11 matches than their opponents.  Two Crusaders are averaging more than a block per frame, while two others are posting at least 0.88 blocks/set.

Player of the Week: Root also earned Horizon League Defensive Player of the Week honors the first week of the season.  The weekly award was Root’s sixth of her career, tying her for second-most in league history with still nearly two full seasons to play.

Leader of the Block: Freshman Morgan Beil earned her All-Tournament nod this past weekend after totaling 12 blocks over the course of the tournament while also adding 2.40 kills/set on .255 hitting.  The rookie stood out in the match against Lipscomb, tallying 12 kills on .360 hitting and posting six blocks, both team highs.  On the season, Beil is averaging 1.09 blocks/set, tops among Horizon League athletes, and also ranks second on the team in hitting percentage (.280) and third in kills (2.24/set).

Hitting High Percentages: Sophomore Ellen Vanden Berg had a superb four-match stretch from Sept. 3-10, hitting .465 with 2.57 kills and 1.00 blocks per set over the four matches.  Perhaps most remarkable was that in all four contests, Vanden Berg hit at least at a .400 clip, highlighted by .550 hitting on 12 kills against Texas A&M-CC.  Vanden Berg currently ranks seventh in the league with a .300 hitting percentage and also ranks eighth in blocks (0.91/set).

Doubling Up: A pair of Crusaders have already each tallied at least five double-doubles on the season, as both posted two apiece last weekend.  Senior Jenny Pokorny has posted six double-doubles, all of the assists/digs variety, while sophomore Sarah Dooms has registered five, all in kills/digs.  Dooms has already reached her total from a season ago, while Pokorny has a while to go before reaching her total of 16.

Consistency in the Back: Junior Taylor Root easily paced the Golden Dome Invitational field last weekend in the digs category, averaging 4.90 digs/set with efforts of 16, 16 and 17 digs over the three matches.  Root’s season average of 5.13 digs/set, while a bit off her NCAA-leading mark from a season ago, is still tops in the Horizon League, nearly a full dig/set ahead of the #2 spot.

Record Book Watch: A couple of Crusaders are looking to move up Valpo’s career charts in the 2011 season.  Root now has 1,535 digs following last weekend, surpassing Karen Kulick for fourth-most all-time in Valpo history.  The junior sits just two digs shy of Lori Barton in the third spot and just 352 out of second.  Meanwhile, Pokorny now owns 2,095 career assists, eighth all-time.  The senior needs 1,049 total assists this season to crack the Crusaders’ top-five in the category.