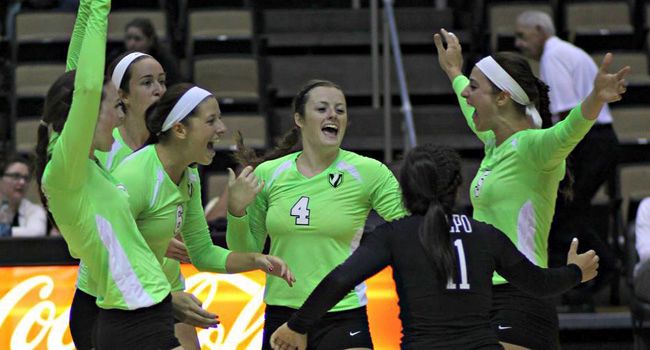 This Week in Crusader Volleyball: Valparaiso hosts the 2013 Valpo Popcorn Classic this weekend at the ARC, as the five-team, eight-match event will take place over Friday, Sept. 6 and Saturday, Sept. 7. The Crusaders will welcome Army, Eastern Michigan, Rhode Island and Iowa, playing the first two teams on Friday and the latter two on Saturday.

Previously: Valpo earned a tournament title in its first weekend of action in 2013, going 4-0 to capture the crown at the UCF Invitational. The Crusaders took down the host Golden Knights in five sets before sweeping Arkansas-Pine Bluff, Alabama State and UNF in their undefeated weekend. Sarah Dooms earned Tournament MVP honors, while Morganne Longoria and Ellen Vanden Berg joined her on the All-Tournament Team.

Following the Crusaders: Live stats for every match of the Valpo Popcorn Classic will be available at ValpoAthletics.com, along with links for free live streaming video of all four of the Crusaders’ matches, available through the Horizon League Network.

Head Coach Carin Avery: Over her 11-plus years as head coach, Carin Avery has won 266 matches and has led Valpo to three league regular season and tournament titles, as well as three NCAA Tournament appearances. A two-time league Coach of the Year, Avery has coached 37 All-League recipients over her tenure as Crusader head coach. She is Valpo’s all-time leader in both victories and winning percentage, and owns 321 total career victories in 13-plus seasons overall as a head coach.

Series Notes: Valpo has never faced Army or Rhode Island on the volleyball court. The Crusaders are 0-2 all-time against Iowa, including a 3-1 loss last season at the Hawkeyes’ home tournament. Eastern Michigan holds a 4-2 edge in the series with Valpo, but the Crusaders claimed a 3-2 win in the last matchup, which occurred in the 2005 Popcorn Classic.

Tournament Champs: Another piece of hardware was added to Valpo’s trophy case with the Crusaders’ title at the UCF Invitational, continuing their tradition of earning championships. It was Valpo’s 16th in-season tournament title under Carin Avery, and the Crusaders have now brought home at least one tournament crown in nine of her 12 seasons at the helm.

Popcorn Classic: This season is the sixth time since Avery’s arrival that Valpo has hosted an early-season tournament, previously doing so in 2002, 2003, 2005, 2007 and 2011. Last time the Crusaders hosted, they finished in second place, going 3-1 and losing only to tournament champ Ball State. Valpo has won its own tournament on three occasions under Avery.

A Family Affair: One of the matches this weekend will have a bit more meaning for one of the Crusaders. Valpo sophomore setter Kelsey Berrington will face off Friday evening against her mother, Kim, who is the head coach of the Eastern Michigan volleyball program.

Dooms Day: Senior outside hitter Sarah Dooms picked up the first career tournament MVP honor of her Crusader career last weekend at UCF, pacing Valpo in both kills (31) and digs (34) while hitting at a .320 clip. Dooms, who also earned Horizon League Offensive Player of the Week accolades, matched her career high with 18 kills in the five-set win over UCF, and had a Valpo weekend-best 16 digs in the finale versus UNF.

All-Tournament Honorees: Senior Ellen Vanden Berg joined Dooms on the All-Tournament Team after totaling 22 kills and 11 blocks over the four matches. Meanwhile, freshman Morganne Longoria earned the honor in her first collegiate tournament for posting 3.17 digs/set as the Crusaders' libero. Longoria also tallied five aces in the sweep of Alabama State, tied for fifth-most in a three-set match in Crusader history.

Plenty of Options: Head coach Carin Avery got a chance to see everybody take the court in the opening weekend, as all 15 healthy active Crusaders appeared in at least two sets. In fact, in going 4-0, only three players - Berrington, Ariel Cudney and Janelle Hobbs - played in all 14 sets.