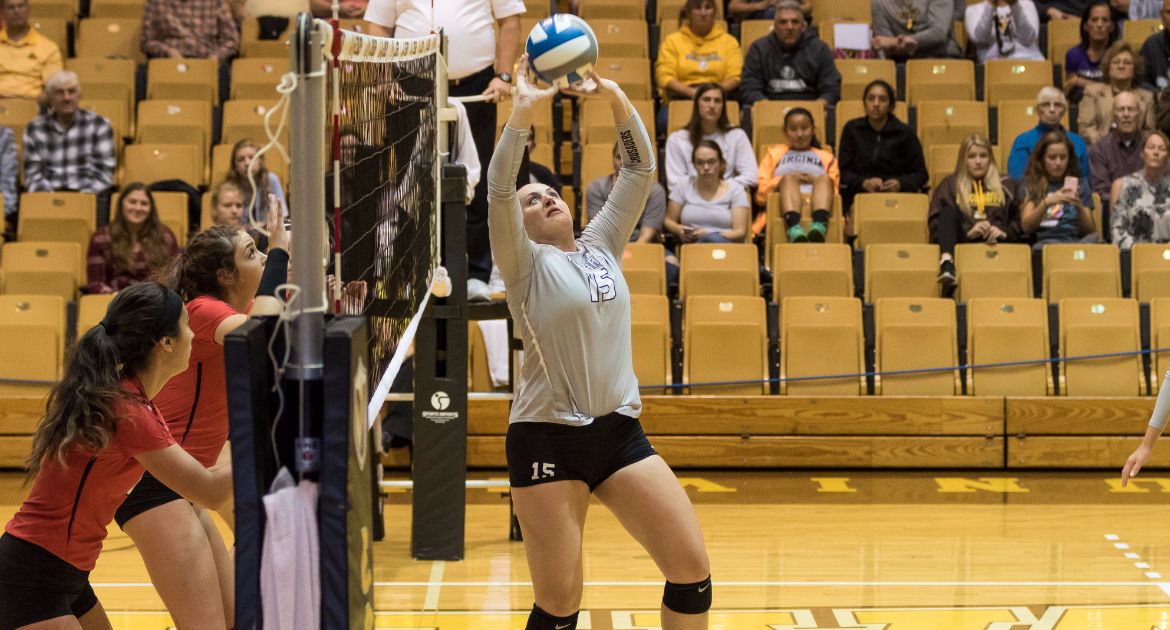 Crusaders return home to the ARC to begin final homestand

This Week in Crusader Volleyball: The Valparaiso University volleyball team opens its final homestand of the year at the ARC this weekend, as the Crusaders host a pair of crucial Horizon League matchups against UIC Friday evening and Green Bay Saturday afternoon. Saturday will be Valpo's Senior Day, as the team honors its six seniors following the match.

Previously: Valpo posted a 2-1 record for the second straight week last week. The Crusaders earned a win in its final non-league match of the year, winning in four sets at Fort Wayne. Valpo then split a Horizon League road trip, falling in three sets at Cleveland State before rebounding for a four-set victory over Youngstown State.

Looking Ahead: The regular season concludes next week for the Crusaders, as they host their final home match of the year Wednesday versus Oakland before traveling to Milwaukee for a Saturday afternoon contest.

Following the Crusaders: Both of this weekend's matches will be streamed live on ESPN3, and also are accessible via WatchESPN and the ESPN app. Links for the live video, as well as live stats, can be found at ValpoAthletics.com.

Head Coach Carin Avery: In her 15th season as head coach at Valparaiso, Carin Avery has won 352 matches (352-148) and has led Valpo to three league regular season and tournament titles, as well as three NCAA Tournament appearances. A two-time league Coach of the Year, Avery has coached 40 All-League recipients over her tenure as Crusader head coach. She is Valpo’s all-time leader in both victories and winning percentage, and owns 407 career victories overall as a head coach, reaching the 400-win milestone earlier this season with the Crusaders' win over South Dakota State.

Series Notes: UIC - The Crusaders enjoy a 30-24 edge in the all-time series against the Flames, but have dominated the series since joining the Horizon League, winning 18 out of 22 matchups. Earlier this season, Valpo continued its dominance with a come-from-behind win in Chicago, rallying from two sets down for a 3-2 victory over UIC.

Green Bay - Valpo owns a 24-12 advantage in the all-time series with the Phoenix, including a 15-6 mark since joining the Horizon League. Earlier this year, however, it was Green Bay which came out victorious in four sets over the Crusaders.

Scouting the Opposition: UIC - The Flames enter the week at 15-11 overall, but are just 3-9 within Horizon League action. Kelsie Groot and Alyssa Ehrhardt lead the UIC offense, averaging 3.70 and 3.50 kills per set, respectively, while Nicole Johnson runs the offense, handing out 10.52 assists/set.

Green Bay - The Phoenix own a 17-7 overall record and are tied for second place in the league standings at 9-3. Four different players average at least two kills per set for Green Bay, led by 2.87 kills/set by Megan Powers. Lydia DeWeese tallies 2.80 kills/set on a team-best .353 hitting percentage and also leads the Horizon League with 1.54 blocks/set.

A Look at the Standings: Valpo enters the weekend tied with Wright State for sixth place in the league standings, and with four Horizon League contests left, are in a fight to earn a spot in the Horizon League Championship - as the top six teams earn berths into the tournament. Milwaukee is two games ahead of the Crusaders and Raiders, while UIC sits one game back of the tie for sixth.

Rallying For Wins: The Crusaders came back after dropping the first set against Youngstown State to take the next three sets and earn the win, a spot they've found success in this year. Five of Valpo's 13 wins have come via the sweep, but of the other eight victories, the Crusaders lost the first set in six of them and rallied for the victory.

Celebrating the Seniors: Valpo will celebrate the careers of its six seniors on Senior Night Saturday night following the match against Green Bay. The group of Lexie Bouza, Rachel Bruinsma, Emily Campbell, Tarrah Lasky, Jamie Lacheta and Morganne Longoria have been a part of 90 victories at Valpo over their four-year careers and have helped lead the Crusaders to a pair of appearances in the league championship match.

Longoria Continues To Fill Dual Role: Senior Morganne Longoria continued to act as both libero and primary setter last week for the third straight week for the Crusaders, helping Valpo to a pair of wins. Over the last three weeks, Longoria has averaged 5.66 assists and 5.38 digs per set while helping lead the Crusaders to a 5-3 record. Over that span, she has set new career highs for both digs (36) and assists (28) in a single match, and has twice been named Horizon League Defensive Player of the Week. On the season, Longoria ranks 30th nationally and leads the Horizon League with 5.04 digs/set.

Success From the Outside: After sophomore Katherine Carlson posted Valpo's first triple-double in six seasons two weeks ago (22 kills, 28 digs, 10 assists) in the Crusaders' win over Wright State, the Crusader pin hitters continued to have success in Valpo's pair of victories last week. At Fort Wayne, senior Emily Campbell led the way with 15 kills, while junior Taylor Graboski hit .282 with 14 kills and Carlson nearly recorded another triple-double, finishing with 13 kills on .324 hitting, 11 digs and eight assists. Then, in the victory at YSU, Campbell and Graboski each tallied 16 kills while hitting .324 and .250, respectively, and Carlson again approached a triple-double, posting nine kills, nine assists and eight digs.

A Record-Setting Contest: The Crusaders' five-set victory over Wright State at the ARC was something unprecented in D-I volleyball this year. As a team, the Crusaders totaled 270 attacks, the most by any Division I team in a single match in at least the last three years. The 270 swings were easily a program high in the rally-scoring era and also marked the second-most in a single match in program history, with the record being set way back in 1990. Valpo finished the victory with 129 digs as a team, the second-most by a D-I team this season – only trailing Wright State’s Friday total of 143 digs. For the Crusaders, the total was the fifth-highest dig mark in a single match in program history – setting a new rally scoring high – and was the highest total since 1994.

Look at the Individual Record Book: Campbell took 79 swings in the win over the Raiders, setting a new Valpo single-match record, which she had shared previously with Kathy Harrison at 77. For her career, Campbell has registered 4,053 total attacks - second-most in program history - while she currently owns 1,352 career kills, good for fifth position and just 52 shy of fourth place. Meanwhile, Longoria ranks third in program history with 2,118 career digs and has picked up 549 of those this season - 10th-most in a season in Crusader history and just 20 behind her mark of 569 from her freshman season for ninth place.

Milestone Saturday: Valpo's match against Milwaukee Oct. 15 featured a pair of milestones reached in a three-point span. A bit past the midway point of the fourth set, Longoria registered her 24th dig of the match, giving her 2,000 career digs. Longoria joined past four-year Crusader liberos Taylor Root and Brittany Malicoat with over 2,000 digs for her career, and ranks among the top-five active players in the category as well. Then, just two points after Longoria reached her milestone, Campbell proceeded to record a special mark as well. Campbell picked up her 1,000th career dig against the Panthers in the fourth set of that contest, after having already surpassed 1,000 career kills last season. The senior is one of just eight players in program history to record quadruple figures in both kills and digs for a career.

Let's Have a Block Party: With the unconventional offensive attack, the need for the defense to step up has been amplified, and the Crusaders did that in the match against Milwaukee - coming within a half-block of matching a program record for blocks in a match. Valpo tallied 20.5 blocks versus the Panthers, the fourth-best effort in program history, as it picked up at least four blocks in all four sets. The total was the program’s highest single-match block total in the 25-point era and was the highest block total since tallying 21 against UCLA in 2005. Individually, senior Rachel Bruinsma led the way with a new career high of nine rejections. Right behind her was senior Jamie Lacheta, who doubled her previous career best of four blocks as she finished the night with eight. Both sophomore Kayla Currier and Campbell finished just one off their respective career highs in blocks as well, posting six blocks apiece.

Returns to Action: Valpo's lengthy injury report has finally been pared down in recent weeks. Campbell returned Sept. 30 after missing three weeks with an ankle injury, while Lacheta and Currier each came off the bench for their first action in some time against Milwaukee Oct. 15 - Lacheta had not appeared since Sept. 30, while Currier took the court for the first time since Sept. 13. Tarrah Lasky returned at Chicago State after missing two and a half weeks, but has only seen off-and-on sporadic action since as she still is not 100%. Among those still sidelined are Lizzie Zaleski and Allison Ketcham - the latter has undergone season-ending surgery and is expected to seek a medical redshirt.

20 Wins, Year After Year: The Valpo volleyball program finds itself among a prestigious group of programs nationwide, as last year’s 27-win campaign was the 14th straight season the Crusaders captured at least 20 victories – all under head coach Carin Avery. Only nine Division I volleyball programs have won at least 20 matches in each of the last 14 years, a group which includes Colorado State, Florida, Hawai'i, Nebraska, Ohio, Penn State, Stanford and Western Kentucky.

League Success: Valpo has finished among the top-four in the Horizon League every season since joining the league prior to the 2007 campaign, including four second-place finishes in the last eight seasons. In addition, the Crusaders are the only team to progress to at least the league tournament semifinals each season since they joined the league, including four appearances in the league title match. Valpo owns a .640 (96-54) winning percentage in Horizon League play since 2007.