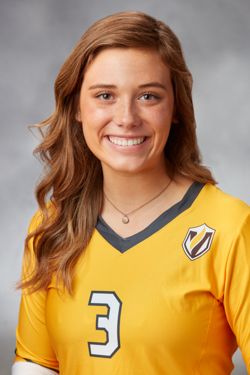 Prep: A four-year letterwinner for the Eddies ... a Third Team All-State honoree as a senior after being an Honorable Mention selection as a junior... earned All-Region accolades each of her final two years and All-Conference honors each of her final three seasons ... helped lead her team to conference title in 2018 as a senior and district championships in her final two years ... played in the MIVCA All-State Volleyball Classic ... played club for Krush Volleyball Club ... team captain each of last three years with Krush ... member of the Under Armour Phenom list as a junior, she made the Under Armour All-America list as a senior.

Personal: Daughter of Joshua and Chloe Leach ... major is nursing.