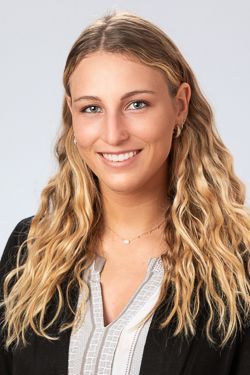 Grace Hales joined the Valpo women's basketball staff for the 2020-21 season as a graduate assistant after wrapping up a stellar four-year career in the Brown and Gold.

Hales finished her playing career at Valpo as one of the program's most accurate shooters of all time, ranking second in program history in free throw percentage (.859) and third in 3-point percentage (.380). Hales tallied 1,123 points over her four-year career, good for 12th in program history, and ranks second all-time at Valpo in games played (123), eighth in 3-pointers made (167) and ninth in free throws made (238).

Hales enjoyed her finest season as a senior in 2019-20, receiving Honorable Mention All-MVC honors in recognition of her work. She scored a team-high 12.2 points/game as a senior and ranked second in the conference in both 3-point percentage (.434) and free throw percentage (.890). Her .890 free throw percentage set a program single-season record, while her mark from the 3-point line is fourth-best in program history. Hales’ shooting only got better within MVC play, as she led all players in conference-only play with a .519 3-point percentage.

Hales led the way for Valpo as the team experienced its most successful season in quite some time during her senior campaign. The 2019-20 squad finished the year with a 17-12 overall record, a 10.5-game improvement over the previous season - good for sixth-best nationally. Valpo jumped 172 spots in the RPI from 2018-19 to 2019-20, the largest leap for any D-I team in the nation. The team's 17 wins marked the program's winningest season since 2006-07, and while competing in the nation's eighth-ranked conference in the MVC, it posted its best conference record since 2008-09.

Also a standout in the classroom, Hales was an MVC Scholar-Athlete Honorable Mention selection as a senior. She graduated from Valparaiso University with a bachelor's degree in communication in May 2019, and is currently pursuing her master's degree in sports media.