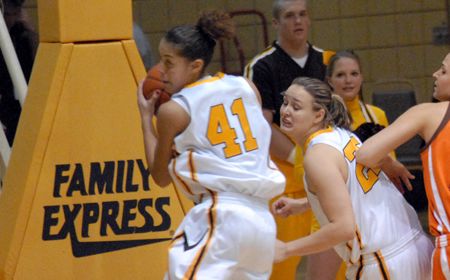 Coming Up in Crusader Hoops: Valparaiso takes to the hardwood for the final time before the new year as well as before the beginning of Horizon League action on Tuesday evening, battling North Florida in the consolation game of the Christmas City Classic.  The Crusaders are looking to snap a three-game losing skid and return to the .500 mark.

On the Air: Tuesday’s game against North Florida can be heard live on WVUR (95.1-FM, Valparaiso) and online at www.valpoathletics.com.  Adam Tein and Danny Robertson will call all of the action live from Stabler Arena.  In addition, free video coverage of the game is available through www.valpoathletics.com.

Series Notes: Valparaiso and North Florida are meeting for the first time ever on the hardwood.  The Crusaders are 2-1 all-time against teams currently in the Atlantic Sun Conference, going 1-0 against Jacksonville and 1-1 against Lipscomb.

Wrapping Up La Salle: Despite a 23-2 run in the first half that put the Crusaders on top by as many as 13, Valparaiso turned the ball over nine times in the second half and allowed the Explorers to make 9-of-20 three-point field goals in falling to La Salle 67-62 on Monday night in the opening round of the Christmas City Classic.  Lauren Kenney led Valpo with 22 points and 14 rebounds while Aimee Litka added 15 points, including three triples.  Agnieszka Kulaga had 11 points, six rebounds, and nine assists.  Margaret Elderton led La Salle with 18 points, as the Explorers also made 18-of-20 free throws on the night.

Scouting North Florida: The Lady Ospreys have dropped five straight games following a 67-47 setback to tournament host Lehigh on Monday night in the first  round of  the Christmas City Classic.  North Florida is only averaging 48.4 points  per game, and have scored more than 56 points in a game just once this year.  Jadhken Kerr leads the team in scoring averaging 8.8 points per game, but has missed the last four contests.  Brittany Kirkland adds 8.1 points per night.  The Lady Ospreys are shooting just 33.2% from the floor, including 29.3% from beyond the arc.  In addition, North Florida is connecting on just 59.8% from the free throw line.  The Lady Ospreys are -2.6 in turnover margin, averaging 21.6 miscues per night.

Kenney Posts Double-Doubles: Lauren Kenney registered her second  double-double of the season on Monday night against La Salle.  The junior college transfer tied her season high with 22 points while grabbing 14 rebounds, one off of her season’s best.  Kenney also had a double-double with 11 points and 15 boards against Notre Dame, and just missed one with nine points and 10 rebounds at Colorado State.  On the season, Kenney is averaging 13.4 points and 8.6 boards per game.

Kenney Also Makes Free Throws: After starting her Valpo career making just 2-of-8 free throws, Lauren Kenney has made 31 of her last 35 attempts from the charity stripe beginning at Colorado State.  The junior is shooting 88.6% from the line in her last seven games.

Varner Posts Career Effort: Ashley Varner had a career night for the Crusaders off of the bench against La Salle.  The sophomore scored eight points, a career high, while making 3-of-4 from the floor.  She also had two rebounds and a block in 17 minutes of action.

Kulaga Dishes the Rock: After registering just 15 assists through the first eight games of the season, Agnieszka Kulaga distributed the ball nine times leading to scores for the Crusaders against La Salle.  Though a season high, the senior had a career-best 12 assists last season against Green Bay.

Valpo and the RPI: Valparaiso entered the Christmas City Classic 44th overall in RPI among the 341 Division I programs according to collegerpi.com through December 28.  As a conference, the Horizon League ranked 10th out of 31 conferences.  The Crusaders’ strength of schedule ranked 10th in the country as well.

Hochstetler Has Career Effort Versus South Dakota State: Launa Hochstetler poured in 20 of her career-high 24 points in the second half for the Crusaders at South Dakota State.  The senior guard also brought down a season-high five rebounds.  Her previous high scoring output came as a sophomore with 21 points against Western Illinois.

Now That is Consistency: Head coach Keith Freeman has stayed with the same five starters in all nine games this year.  Agnieszka Kulaga, Aimee Litka, Launa Hochstetler, Lauren Kenney, and Sylwia Zabielewicz have taken to the court each night for the tip.

Litka Returns to Double Figures: After scoring in double figures in 31 of 34 games dating back to last season, Aimee Litka had the string snapped at North Texas.  Since then, she had scored 10 or more points just once in four games prior to posting 15 points against La Salle on Monday evening.

Four Among League’s Leading Scorers: Valparaiso boasts four of the Horizon League’s top-20 scorers, including three of the top eight producers.  Agnieszka Kulaga is third in the conference scoring 16.7 points per night while Lauren Kenney ranks sixth pouring in 13.4 points per game.  Aimee Litka adds 13.3 points per contest, eighth best in the conference while Launa Hochstetler’s 10.7 points place her 20th.  As a team, Valpo is averaging 67.3 points per game, second in the Horizon League.

From Downtown: The Crusaders at the top of the Horizon League in both three-point shooting percentage and makes per game.  Valpo’s 37.2% shooting from downtown leads the conference percentage wise, while the 6.1 makes per night are also number one in the conference.

Playing Defense: Valpo has forced opponents to struggle shooting the basketball this season.  Opponents are making just 37.9% of its shots from the floor.  The defensive field goal percentage for the Crusaders is tops in the Horizon League.  Opponents are also shooting just 31.7% from three-point range, third best in the conference.  The Crusaders are also second in the league in rebounding margin at +2.3 boards per night, grabbing 39.0 per game.

Kulaga Nearing Top-20 All-Time at Valpo in Scoring: Agnieszka Kulaga has the opportunity to move into the top-20 all-time at Valpo in scoring within the next couple of weeks.  The senior guard has scored  787 career points (9.0 per game), and needs just 43 more to match Jill Otto’s (1985-1989) 20th place mark of 830 points.

Hochstetler Ranks Among Career Assist Leaders: Launa Hochstetler continues to climb Valpo’s career assist list.  She had three assists against La Salle, and currently moved into a tie for eighth place all-time with Lisa Winter (1998-2000).  Both have 264 helpers for the Crusaders.  Hochstetler is 14 assists shy of Suzie Hammel’s (2000-2004) seventh place total of 278 assists.

Kulaga Joins Hochstetler on Assist List: Agnieszka Kulaga had nine assists against La Salle and now has 215 career assists to move into 16th place all-time wearing the Brown and Gold.  The senior needs two more assists passed Lynda Kukla’s (1988-1992) total of 208.  Next up on the assist charts for Kulaga is Stephanie Greer (1987-1991), who has 224 career helpers, nine more than the senior.