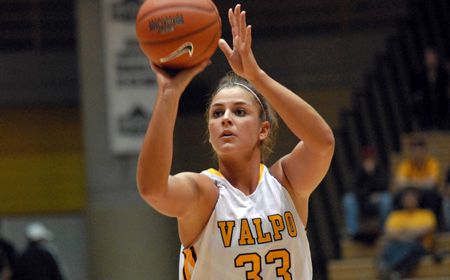 Valpo held a 16-point advantage with 9:38 to play in the game before UIC closed to within two in the final seconds, but the Crusaders made free throws down the stretch to solidify the victory.

With the win, the Crusaders handed UIC its first loss in Horizon League play and extended Valpo’s winning streak against the Flames to seven straight.

Valpo started the game strong capitalizing on the inside presence of Emig and the shooting of Hochstetler.   Emig score eight early points in the paint and Hochstetler connected on a combination of drives in the lane and pull-up jumpers as the Crusaders took a 29-16 lead with 5:34 to play in the opening half.  Hochstetler, a senior guard, tallied 10 during the first half run.

“I liked the way our kids came out and moved the ball in the first half,” head coach Keith Freeman said.  “We got the ball into the low post and converted.”

UIC battled back, closing within eight, 35-27, by intermission, despite allowing Valpo to shoot 53.3% from the floor.

After the Flames scored first in the second half, Valpo pushed the lead back to 11, 43-32, six minutes into the stanza.

With the lead hovering between nine and 11, Leah Hochstetler (Berlin, Ohio/Hiland H.S.) hit a three-pointer following an offensive rebound, and two free throws by her twin sister Launa allowed the Crusader to extend the lead to 16.

Valpo’s lead remained at 16, 56-40, with under nine minutes to play before UIC scored nine straight points, capped with a Shameia Green jumper on a fast break, to bring the Flames within seven with five minutes to play.

The Crusader lead stayed between seven and nine heading into the final two minutes, when six straight points brought UIC to within three, 62-59, following an Ashley Hluska lay-in with 56 seconds to play.

Following a pair of free throws by Agnieszka Kulaga (Tarnow, Poland/I Liceum Ogolnoksztalcace H.S.) with 21.4 seconds to play, Jessie Miller hit a three-pointer to bring the Flames to within two.  Aimee Litka (South Bend, Ind./Saint Joseph’s H.S.) made two more free throws to secure the win for the Crusaders.

“We had some sloppy closeouts and missed boxes at the end to allow them to creep back into the game,” Freeman commented.

Hochstetler tied her career high set earlier this season while Emig surpassed her previous high of 13 set last season against UIC.  She was 7-of-10 from the floor.

“Katie did a nice job tonight of being ready to play,” added Freeman.

Kulaga added 12 points for the Brown and Gold while Litka had 10 as four Crusaders found double figures in the scoring column on the night.  Valpo shot 47.2% for the game and committed just 13 turnovers, tying a season low.

“We handed the ball pretty well tonight,” concluded Freeman.  “Thirteen turnovers is nearing where we want to be.”

Meghan Hutchens led UIC (9-5, 3-1 Horizon League) with 16 points while Jessie Miller added 15 and Green tallied 12 for the Flames.  UIC shot 46.8%, very similar to Valpo, but the difference was at the free throw line where Valpo went 14-of-16 compared with 3-of-5 for the Flames.

Valparaiso (8-7, 3-2) will close out the homestand on Saturday afternoon as the Crusaders host Loyola (Chicago) in a 1:35 p.m. contest at the ARC.  All of the action can be seen live on the Horizon League Network.

Game Notes: Valpo now leads the all-time series with UIC 18-11, including an 11-2 mark at the ARC … Emig became the 10th different Crusader to tally double figures in scoring this season … UIC held a 36-28 advantage rebounding, including a 15-8 edge on the offensive glass … Kulaga was 4-for-4 from the free throw line to improve to 89.1% for the season … the Crusaders made a season-low two three-point field goals but held UIC to 3-of-17 from beyond the arc.