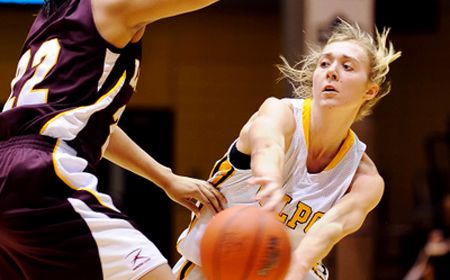 Hochstetler, who had six assists in the game, reached the 300 assist mark with a feed down low to Whitney Farris (Kokomo, Ind./Kokomo H.S.) with 13:53 to play in the game to start a 10-3 Valpo run that put the Crusaders in front by double figures.  The senior point guard now has 303 helpers for her career.

“Launa’s getting her rhythm back shooting the ball,” head coach Keith Freeman said.  “She’s a heck of a player with her mid-range jump shot.  That allows her to be a multi-dimensional player, shooting and passing.”

Aimee Litka (South Bend, Ind./Saint Joseph’s H.S.) added 17 points, including making 7-of-8 from the free throw line, and Valpo as a team shot nearly 61% in the second half to move into sole possession of third place in the Horizon League standings.

The first half was one of runs, with Valpo jumping out to an early 8-2 lead and using another 10-0 spurt to build a 21-10 lead with just under seven minutes to play in the stanza.  Loyola answered with a 9-0 run of their own over two-and-a-half minutes to close within two, before Valpo eventually took a 28-25 lead into the locker room.

After the Ramblers cut the Valpo lead to one and had the basketball with under 16 minutes to play in the game, Farris scored on a lay-in and Litka hit her second triple of the game.  Hochstetler followed with another lay-in inside to push the Crusader advantage back to eight, 39-31.

Loyola would cut the lead back to four, but Hochstetler’s assist started the run that extended the lead to 12.  One more 10-1 Crusader spurt pushed the lead to 17, 59-42, with just under six minutes to play on another jumper by Hochstetler and Valpo maintained a 13 to 19 point lead the rest of the way.

Sylwia Zabielewicz (Warsaw, Poland/Generala Wladyslawa Andersa H.S.) added 10 points for the Crusaders on 5-of-8 shooting as three Valpo players tallied double figures on the afternoon.  Farris had eight points and a game-high eight rebounds for the Brown and Gold.

“Slywia had a good second half inside,” added Freeman.  “We did a good job going at them after we got them in foul trouble.”

Valpo finished the game shooting 47.2% from the floor after making just 32% of its shots in the first half.  The Brown and Gold made 6-of-13 from three-point range.

The Ramblers turned the ball over 26 times in the game, leading to 29 points for Valpo.

“I really like us winning the transition from defensive to offense,” said Freeman.  “We did a good job of putting pressure on them to get back on defense.”

Loyola (5-10, 0-5 Horizon League) was led by Shannon Finnegan, who scored 11 points and had seven rebounds.  The junior center was the only Rambler to tally double figures on the afternoon.

Valparaiso (9-7, 4-2) will hit the road for a three-game road trip beginning with instate rival Butler (11-6, 6-0) on Friday evening in Indianapolis, Ind.  Tip-off against the first place Bulldogs is set for 6 p.m. CST, with all the action carried live on the Horizon League Network.  The game can also be heard on WVUR (95.1-FM, Valparaiso).

Game Notes: Students from Parkview Elementary School were recognized for their art work and writing prior to the game as part of the Horizon League’s Dr. Martin Luther King, Jr. celebration … Litka’s two triples moved her past Heidi Diefenthaler (1992-1996) into seventh place all-time in school history with 141 … Loyola outrebounded Valpo 29-28 but Valpo had a 6-3 edge on the offensive end … Valpo is 13-1 all-time against the Ramblers including a perfect 7-0 at home … this is Valpo’s first three-game winning streak since winning four straight from December 16, 2007-January 10, 2008.