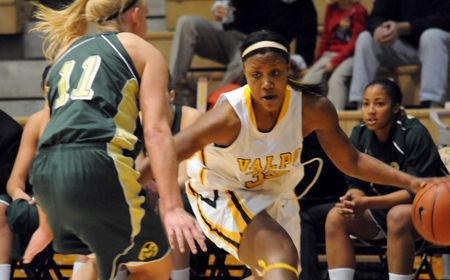 Betsy Adams (Monticello, Ind./Twin Lakes H.S.) tied the game on a three-pointer with just five seconds remaining Saturday afternoon, but the visiting Central Michigan Chippewas connected on a pair of free throws with 1.5 seconds left to upend Valparaiso 70-68 at the Athletics-Recreation Center.

Adams connected on five triples in the game on her way to 16 points, the last coming after Central Michigan went up 68-65 with 13.9 seconds to play following a pair of free throws.

The junior drained her triple from the right wing, but with 1.5 seconds left a foul near mid-court allowed Kendra Holman to hit the two game-winning free throws.  Adams had one last chance from 25-feet as time expired, but just missed.

“The play was perfectly executed to tie the game,” head coach Keith Freeman said afterwards.  “We got a good shot at the end too.”

Valpo jumped out to an early 29-18 lead with 6:14 to play in the first half keyed by a 17-4 run over six minutes.  Kelly Watts (Gary, Ind./East Chicago Central H.S.) hit two threes and Lauren Kenney (Mooresville, Ind./Mooresville H.S.) added six points to give the Crusaders the lead.

Back-to-back triples by Kendra Holman cut the lead to five and the Chippewas eventually closed to within two, 58-56, with 7:13 to play.  Britni Houghton’s lay-up with 3:52 to play tied the game at 64 and neither team would score again until Houghton hit two free throws with 1:12 to play to give Central Michigan the two-point lead.

Kenney split a pair of free throws with 24.2 seconds to play, setting the stage for the final seconds.

Kenney finished the game with her third double-double of the season, tallying 21 points and 12 boards while adding three assists.  Watts tallied 10 points for her first double-figure game of her Valpo career while adding five boards.

“In the first half we had 14 touches in the lane and we scored on 11 possessions,” Freeman added.  “In the second half they were chasing Lauren on the blocks.”

Houghton led all scorers with 28 points for the Chippewas while Holman added 13 and Kaihla Szunko scored 12 more.

“Houghton is an aggressive driver right,” Freeman said.  “We put three people on her over the course of the game and no one figured her out.”

Valpo shot 46.2% from the floor for the game, including 40.9% from three-point range, but committed 20 turnovers leading to 20 Chippewa points.

Game Notes: Central Michigan leads the series 4-2 and has won four straight … Raegan Moore (Girard, Pa./Girard H.S.) scored her first collegiate points and had four assists … Kenney and Adams have scored in double figures in all six games this season … Kenney has 10 or more points in 11 straight games dating back to last season.