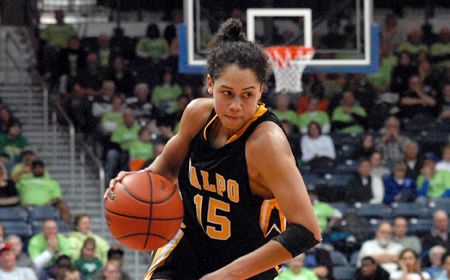 Lauren Kenney (Mooresville, Ind./Mooresville H.S.) and Raegan Moore (Girard, Pa./Girard H.S.) each tallied career highs on Saturday afternoon as Valparaiso closed out the 2009-2010 regular season with an 88-77 victory over UIC at the UIC Pavilion in Chicago, Ill.

“I have to give all the credit to our kids,” head coach Keith Freeman said.  “They battled hard all night long.  We got a great game from Lauren inside and Raegan came off of the bench and shot the ball extremely well.”

Whitney Farris (Kokomo, Ind./Kokomo H.S.) got the Crusaders going, scoring eight of the team’s first 10 points to keep Valpo close.  UIC took a 19-11 lead with 12:43 to play in the opening half.

Kenney converted a three-point play to jump-start a 14-0 Crusader run.  Moore scored driving to the basket to tie the game at 19, and followed it up with another hoop to put Valpo in front.

A Kenney put-back of her own miss capped the spurt, as Valpo took a 25-19 lead at the 8:33 mark.  Moore kept the Crusaders on top, scoring nine out of 13 points to help the Brown and Gold maintain the six-point advantage, 30-24.

UIC fought back with an 8-3 run to pull within one, 33-32, before Valpo went on another run.  Another Kenney three-point play pushed the lead back to 44-36 heading into the final minute of the half.  Taylor Foulkes, who scored 11 first half points for the Flames, drained a three-pointer as time expired, but Valpo took a 44-39 into the break.

The Flames scored the first five points out of the locker room to tie the game, and a Jessie Miller three-point play gave UIC its first lead of the second half 47-46 five minutes into the half.

Laura Richards (Connersville, Ind./Connersville H.S.) turned an offensive rebound into a three-point play at the 6:25 mark to put the Crusaders up by four and a Skyler Gick (Otterbein, Ind./Benton Central H.S.) four-point play after being fouled made it 70-64 Crusaders with under six to play.

Betsy Adams (Monticello, Ind./Twin Lakes H.S.) pushed the lead to nine, 75-66 and Kenney followed with a three-point play to extend the advantage to 12.  The Crusader defense held the Flames without a field goal for more than four minutes and Valpo made free throws down the stretch to secure the win.  Valpo made 21-of-26 (80.8%) from the charity stripe for the game.

“The key to the game was that we only turned the ball over 12 times,” Freeman added.

Valpo shot 55.6% from the floor for the game, including 7-of-11 from three-point range.  Adams added 10 points for the Crusaders.

With the win, Valpo (9-20, 6-12) will host Milwaukee at the Athletics-Recreation Center on Monday evening in the first round of the Speedway Horizon League Tournament.  Tip-off is set for 7 p.m.