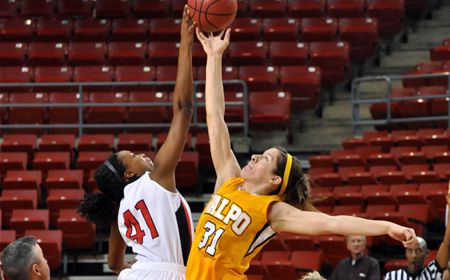 Upcoming in Crusader Basketball: It will be a quick turnaround for Valparaiso after posting its first victory of the season on Friday evening, as the Crusaders return to the hardwood on Saturday afternoon to face host Lamar in the Preseason WNIT.

On the Air: Saturday’s game will be broadcast live on WVUR (95.1-FM, Valparaiso) as well as online at www.valpoathletics.com.  Chris Kleinhans-Schulz and Renee’ Turpa will be calling all of the action live from Montagne Center.  Live stats will be available through www.valpoathletics.com for the game as well.

Head Coach Keith Freeman: In his 17th season on the Valparaiso bench, Keith Freeman has a 270-203 (.571) record at the helm of the Brown and Gold.  In his 23rd season overall, Freeman has a 399-250 (.615) career mark.  He is Valpo’s all-time winningest coach and has amassed more than half of the victories in the program’s history.

Series Notes: Valparaiso and Lamar are meeting  on the hardwood for  the first time ever.

Wrapping Up Austin Peay: Betsy Adams scored a game-high 20 points and Ashley Timmerman added her first 16 points of  the season on Friday evening as the Crusaders downed the Lady Govs 72-57 as part of the Preseason WNIT held in Beaumont, Texas.  The Crusader opened up a four point halftime lead with a 9-2 run midway through the second  half, sparked by back-to-back triples from Timmerman.  Valpo never trailed after taking the lead with just under 14 minutes to play in the first half, but the Lady Govs tied the contest after the Crusaders built a nine point first half advantage.  Jasmine Rayner led Austin Peay with 12 points and eight rebounds while Dalila Thomas added 11 points and eight boards.

Scouting Lamar: The Cardinals picked up their first victory of the season on Friday night as well, earning a 83-66 win over Utah Valley at home.  Jenna Plumley leads Lamar averaging 16.5 points per game.  She scored 15 points and dished out 10 assists in the win over the Wolverines on Friday.  Ang  Green scored a team-high 18 points against Utah Valley as four Cardinals tallied double figures.  Trashanna Smith is averaging 9.5 rebounds per contest this season for Lamar, a team that went to the NCAA Tournament a year ago.   The Cardinals were picked to repeat in the Southland according to the preseason poll.

Another NCAA Tournament Team on the Slate: Lamar will be the third straight team the Crusaders will have played to open the season that participated in the NCAA Tournament one year ago.

Valpo in the WNIT: The Crusaders have played in the Preseason WNIT just one other time in school history, losing at Colorado State 94-71 on Nov. 13, 1998.  In Valpo’s last appearance, the tournament was just a single elimination event whereas today the WNIT guarantees every school at least three games.  Valpo’s win against Austin Peay on Friday evening was the Crusaders’ first ever in the Preseason WNIT.

About the WNIT: The Preseason WNIT features 16 schools from 16 different conferences with every game being played on campus sites.  Each school is guaranteed three games, with the Crusaders opening tournament play last Friday at DePaul.  Valpo met Austin Peay in the first consolation round game before meeting Lamar on Saturday afternoon.

Freeman Seeking Win #400: Head coach Keith Freeman is looking for his 400th career victory when the Crusaders take on Lamar Saturday in what will be his 650th collegiate game on a bench.  Freeman is in his 23rd season of coaching women and picked up win #300 back in 2004 against Oral Roberts.

Adams Posts 20: Betsy Adams poured in 20 points, 15 of which came in the second half, as the Crusaders earned their first win against Austin Peay.  Adams is averaging 17.5 points per contest through two games, and now scored 20 or more points five times during her career.

Timmerman Heats Up: After getting off to a slow start in her Valparaiso debut, not scoring at all against DePaul, Ashley Timmerman came up big against Austin Peay.  The junior college transfer tallied 16 points, making  6-of-11 shots from the floor, including three three-pointers against the Lady Govs.  She also pulled down seven rebounds and dished out three assists.

Doing the Little Things: Laura Richards may not be filling the scoring column for the Crusaders, but she still fills the stat sheet.  The sophomore guard registered four assists and had four steals against Austin Peay after pulling down four rebounds against DePaul.

Dishing the Rock: Skyler Gick had a career-high seven assists in the season opener against DePaul and followed her effort up with four more helpers against Austin Peay.

Newcomers Account for Major Minutes: Valparaiso’s newcomers saw action for 86 out of 200 minutes in the season opener against DePaul, including 70 minutes from freshmen.  Tabitha Gerardot led the way playing 30 minutes, sharing team-high honors with Betsy Adams.  The large load of minutes continued against Austin Peay as newcomers accounted for 81 more minutes, led by another 30 from Gerardot.  Newcomers have accounted for nearly 42% of total minutes (167) while senior have played just 38 total minutes (9.5%).

Starting Freshmen Becoming a Trend: Tabitha Gerardot became the third freshman in four seasons to start her collegiate debut for the Brown and Gold.  She joined teammates Ashley Varner (2007) and Laura Richards (2009) as other Crusaders in recent years to start the first game of their freshman season.