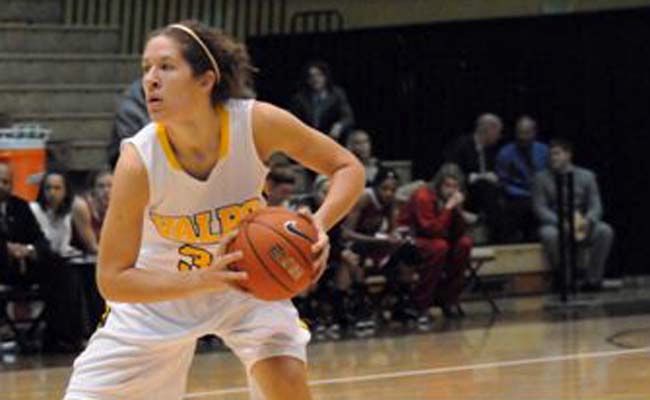 Valparaiso returned to the Athletics-Recreation Center for the first time this season on Wednesday evening, but Ball State spoiled the homecoming, defeating the Crusaders 66-52.

Shooting in the second half proved to be the difference as the Brown and Gold connected on just 26.7% of its shots out of the locker room.  The Cardinals led just 30-28 at the break, but shot better than 44% in the second half after a 24.2% shooting percentage in the opening 20 minutes.

“We’re a good shooting team and I think we can be better than what we are,” head coach Keith Freeman said.  “They were guarding us one on one in the post and we haven’t proven we can score there yet.  We’ve got good kids who working hard trying to do their best.  We’re just very inexperienced right now.”

Valpo started out strong, taking an early 9-1 lead and holding Ball State without a field goal for more than five-and-a-half minutes to start the contest.  An 18-6 run by the Cardinals gave the visitors their biggest lead of the first half, 19-15, with 8:51 to play before intermission.

“We got off to a good start for the first six minutes of the game,” said Freeman.  “But we’re not creating enough opportunities where we get fouled and can go to the line.”

The Cardinals finished the half with a 10-2 spurt, capped by a pair of free throws from Brandy Woody with 1.4 seconds remaining to take the two point advantage into the locker room.

Ball State immediately stretched its lead out to six before another Adams three pulled Valpo within 34-33 at the 17:40 mark, the closest the Crusaders would get the rest of the way.

Seven straight points by Ball State extended the lead to eight, and the advantage would grow to 11, 45-34, with under 12 minutes to play.  The Cardinals continued to add to its lead, pushing it to 62-43 before the Crusaders forced a couple of later turnovers, pulling within 11 in the final minute.

Adams led the Crusaders with 18 points, her fourth straight game in double figures.  The junior guard was 7-of-11 from the floor as Valpo’s lone player to score in double figures, but was hampered by foul trouble in the second half.

“Gina and Laure are gritty players,” Freeman added.  “They had 22 boards between the two of them.  But they had 19 offensive boards and that’s just too many.”

Valparaiso (1-3) will remain at home on Sunday afternoon as the Crusaders host Cincinnati.  Tip-off is set for 1:35 p.m. from the ARC.

Game Notes: Valpo had won five straight home openers prior to the loss … the Crusaders are now 12-5 in home openers under Freeman … Adams has tallied double figures in all five games this year … Lange’s previous high in rebounding was eight last Saturday at Lamar … Richards previous best on the boards was eight last season against Detroit … Ball State leads the all-time 10-5 and has won two straight meetings.